Mincemeat has a long tradition on my father's side of the family, especially since it was developed as a way of preserving meat without refrigeration. Today, I enjoy many kinds of mincemeat, with meat and meatless; they are both good.

When my great grandfather finished his tour of duty for Ohio in the American Civil War, He set up shop in Madison County, near London, Ohio and became an engineer of sorts on the Nation Road (Route 40). Here he made his own tools and helped in the construction of the highway through Madison County. In the next generation, his son (my grandfather) worked on the National Road in eastern Ohio, in Guernsey County where the family owned farmland.

It was in Guernsey County that my grandmother continued the tradition of preparing mincemeat in large batches. She often cooked outside the rear of the farmhouse in a big cast iron pot over a cooking fire.

Here she made apple butter, mincemeat, soap, and candles. Everything from the animals that were raised on the farm was put to use and nothing was wasted. The apples came from Johnny Appleseed - see the link at Crab-Apple-Slaw-and-Other-Surprises for more recipes and some history!

My grandfather outlived three wives and had three sets of children (his last set in old age actually)and my grandmother was his second wife, preparing mincemeat back in the years around 1870 - 1900.

Lacking refrigeration, farm families smoked hams, pickled meats, and used root cellars beneath their houses to keep potatoes and other root vegetables coll and unspoiled for long periods of time. Vegetables, fruits, and even the mincemeats were also canned in glass canning jars for use over the winter. Mincemeat was always in the cellar or on a kitchen pantry shelf.

Elephant Ears at the Fair

Fair Foods: The Most Popular and Offbeat Recipes from America's State and County Fairs
Buy Now

Ear Of the Elephant

Another item that was made on the farm was the pastry we now know as Elephant Ears Leftover pie dough was baked or fried and dusted with cinnamon and sugar. While these were made at home to prevent wasting pie dough, they likely were made at the circuses that pulled up to the edge of town on the railroad tracks and performed in a nearby field. My father and his brothers and the farmhands would meet the train and help unload, care for the elephants, and be rewarded with circus tickets and treats. It has required a couple of decades of reading Ray Bradbury novels and watching the film versions to understand just how important the circus and these foods were in the lives of the farm family. As circuses decline, we lose some of that element of joyous magic, and modern circuses are not the same. But if you have a chance, go see the circus and think about the Midwest in the early 1900s. Absolutely as magical as the food on the farm..

In the later 20th Century, my family did not make mincemeat in the city, but purchased it in jars or small rectangular packages. Nonesuch is the brand that I recall from childhood. The jarred variety was ready to use, but the contents of the small package needed to be soaked in water to reconstitute the dried mincemeat. They were both good, but I preferred the richer aroma and flavors of the jarred variety. I can taste it now as I write - the spicy cinnamon raisins and currants, the slight cider vinegar and sweet flavors, the apples, and the rest. Later, a friend gave me a quart of homemade mincemeat left in the estate of an aunt - It contained beef and I enjoyed making two pies from it, remembering how my grandmother made it in a big iron pot out back and baked pies in a wood-fired oven.

Here are a couple of family mincemeat recipes for your enjoyment. I hope you like them.

4.5 stars from 2 ratings of Homemade Mincemeat 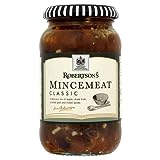 To the cooked beef cubes add the apples, raisins, vinegar, orange and orange juice, salt, cloves, cinnamon, nutmeg, sugar, sorghum/molasses and 1 cup of the reserved cooking juice of the beef (beef stock). Fill quart size canning jars and let the mix sit in the refrigerator for at least 3 weeks before using.

This thick spicy beef mix is called mincemeat, but mincemeat is really any preservation of meat and fruits - like chopped cherries, dried apricots, apples or pears, raisins and candied citrus peel - combined with nuts if desired, beef fat and brandy or dark rum. You can still find ready-made mincemeat in a jar or a small package that needs to be reconstituted with water. Modern pre-made mincemeats are usually meatless.

In 1659, British Prime Minister Oliver Cromwell banned Christmas treats as evil. This was enforced in the British Colonies in America, so many towns banned mincemeat pies at. Christmas itself actually banned in Boston from 1659 to 1681 and anyone caught celebrating it was fined or worse.

Mock mincemeat pie has no meat but is still very good. However if you even use meat, any meat can be used: beef, venison, pork, goose, caribou, elk, or your favorite.

In a large pot over medium-high to high heat, cover the green tomatoes with cold water; and boil for 5 minutes and drain. Reduce heat to low and add vinegar, apples, brown sugar, cloves, nutmeg, fat, meat, raisins, salt, cinnamon, and butter. Simmer about 45 minutes. Remove the pot from the heat and add rum or brandy to your own taste if desired. Some folks use Kentucky bourbon. Refrigerate the mixture for 3-4 weeks or pack into hot sterile canning jars and seal - don't use it for a month, so flavors will blend.