Gabriel loves to cook all kinds of foods, from baking to a full roast dinner.

Delicious Irish Breakfast Sausages Are The Best in The World

A traditional breakfast from Northern Ireland, hence the name. The best way to start the day or the afternoon or even finish the day. In other words there is no right time for this belt buster of a meal. Anytime will do (I feel a song coming on).

The Ulster Fry is world famous due to the number of emigrants that departed from Irish soil in times of poverty and famine. Today the dish comes with all kinds of extras including: pancakes; mushrooms; tomatoes; baked beans; potato cakes and any personal favorite that requires frying even pork chops and lamb chops. The tradition of several fried Irish breads adds to this number one fry up.

I'm sticking to the more traditional dish of black and white pudding, sausage, bacon, eggs and Irish breads, all fried in the same pan. You will need a very large non-stick pan (see FIG 1) I love this pan and it works a treat. I wipe the residue lard off the pan when warm and reuse) and lard (fresh white lard from your butchers if you can) for frying all your ingredients. I only use non stick utensils with this pan, see FIG 2) it really is a must to safeguard your non stick pan.

This is the easy bit: fry the sausages in a little lard turning to brown evenly, adding the bacon and pudding when the sausages are almost ready. When cooked remove and keep warm. Add a little extra lard and fry the sliced breads until nice and golden. Remove and keep warm. Adding a little more lard, fry your eggs until cooked to your liking. I like a sunny runny egg. Arrange your food on a big warm plate. Look over your shoulder to make sure no one is lurking behind you trying to steal one of your delicious sausages or lard ladened slices of bacon.

The only other accompaniment to this humongous meal comes in liquid form. The black stuff of course and I don't mean a cup of tea: A of pint Guinness.

Tuck in and enjoy. 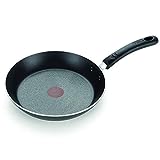 A traditional working and poorer class dish. Colcannon is a stogy meal that fills a tummy pretty quick. In bygone years this dish was made from cabbage/cole and potatoes the stable diet of the Irish. The word colcannon comes from a Gaelic word cal ceannann meaning white headed cabbage. Colcannon was originally associated with Hallowe'en the 31st of October. Trinkets were hidden in the food, often rings. Single girls were delighted to find one as it signified a proposal of marriage. A story tells of fair maidens filling their socks with the mash and hanging them on the main door of their house. The idea behind this peculiar fashion; the first man through the door would be their future husband. With the faces that come through my front door I'd never take that risk. You will need a large pot and a potato masher.

Cook the potatoes until almost soft. Add the cabbage and cook till tender. Drain off the water, add chives and butter. Place a lid on top and steam for a couple of minutes. Add the milk and mash. Season and serve. I love this dish served with a runny fried egg on top. Leeks or onions are also commonly used. I like the smoother texture when using chives and they give a wonderful subtle flavor.

A Great One Pot Dish

The top five wouldn't be complete without a famous Irish stew. To day the best cuts of lamb are used to make this tasty culinary delight. The good old days saw neck of mutton and mutton chops stewed to within an inch of their lives with onions, potatoes and water. Cooked on an open fire till the mutton was tender enough to eat. Mutton was the dominant meat in old Irish hay days as they relied on the wool and the milk from the sheep. The fancy stews of to day are often claimed as signature dishes in the best of restaurants having added many accompaniments to this meager dish, from carrots to chilies. I have a hot little dish for you, but pleased to say not a chilli in sight.

In a deep bottomed non stick pot (see FIG 3) a great and inexpensive pot, I use it all the time) add all the above ingredients. Slowly bring to the boil, cover and simmer for 1 and 1/2 to 2 hours till the meat is tender and the liquid has thickened. Please feel free to add your own desired extras if you want to spice things up a bit. Traditionally this stew was all about slow cooking and tender meat.

If you are a fan of the black stuff, substitute 125ml of the water for 125ml of stout. If you want to brown the lamb, first add a lttle vegetable oil to the pot heating through, brown the meat and carry on with the recipe from there.

Boiled bacon or back bacon cured or salted is the mainstay of this dish. In the olden days Irish families often reared a pig. Once the pig was nice and fat they would kill and butcher it. Skillfully cutting the meat into different joints of pork; the original organic meat. With their cabbages growing in the garden (or in some cases the landlords field) this was a common dish. Ingredients were at the helm and families were cheaply fed. Ancestors must frown upon the usage of dijon mustard, modern marinades and the dreaded parsley sauce.

Get out your largest pot and start cooking.

Put the bacon into a deep bottomed pot, cover with cold water, bring to the boil. Discard the water and place the ham back in the pot with all the ingredients except the cabbage. When the meat is almost cooked add the cabbage and simmer till tender. Serve the bacon in slices with the cabbage wedges. Pour over a little of the bacon water and serve with boiled potatoes.

This wonderful delicacy believe it or not was a fond stable food for the Irish and not necessarily for the taste. The rivers were full of oysters and in the early 1800's, they were cheap and plentiful. A walk along the river was a free feast. Another dish experienced first by the working class. Gosh how times have changed. The world famous Galway Oyster Festival held every September is definitely a date to add to your dairy if you like oysters. Not only will you stock up on vitamin D, but you'll get a pint of Guinness too. This is the traditional way oysters are served in Ireland and you don't want to break tradition. That's my excuse anyway.

These days I use an oyster Jack (as seen in FIG 4) life is just too short, so if you love oysters do yourself a favour and invest in an oyster Jack). However for you first timers here is how it's done: using a towel placed over the oyster, place the knife into the small opening into the hinge of the shell. Carefully twist the knife to open the shell. Move the knife slowly along the shell. Open and discard the flat shell leaving the oyster like a pearl sitting in the curve of the remaining shell. Arrange on the crushed ice with the lemon wedges. Place the buttered bread on the side and off course a glass of Guinness. A perfect dish from the ruminants of the good ole days in good ole Eire.

FIG 4) Life Just Got Easier: An Excellent Oyster-Jack, Strong and Easy to Use