From granitas to ice gola to flavored snow: how to make shaved ice at home

Shaved ice stands spring up all over the world during warm summer months to offer up their tasty wares. But what if you’re craving shaved ice in the dead of winter? What if there are no shaved ice vendors in your area?

Although it’s not as easy as walking up to a kiosk, making your own shaved ice at home--be it a snow cone, snowball, granita, ice kacang, or flavored snow--is not difficult. Even better, making shaved ice can be fun and inexpensive. You can try new flavors and create your own special syrups.

The main ingredient: shaved ice and where to get it

There are several ways to get shaved ice, some of which require specialized equipment. Although it’s possible to make shaved ice with a fork and some patience, it’s quicker and easier to use a blender, rasp, or shaved ice machine. Some recipes even call for ice crushed the old-fashioned way, with a hammer and towel-wrapped ice.

You can rasp ice down with a hand-cranked or handheld ice scraper. Some of these graters create crunchy ice chips. In India and Pakistan, shaved ice is often served on a stick rather than in a bowl. You can replicate this by putting finely crushed ice--either grated, rasped, or run through a blender--into a popsicle mold. 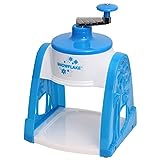 This hand-cranked ice shaver doesn't require any electricity. Just buy a bag of ice and crank away. 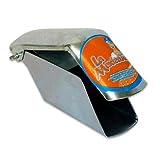 This type of scraper is used in Mexico. It is small enough to fit in the palm of your hand. You'll have to buy a big block of ice in order to make use of it. To find these blocks of ice, Google the name of your city, "catering" and "ice block" to get leads on local companies that sell ice for carving.

If you’re a big fan of shaved ice, you can buy a dedicated machine. These days, Amazon sells a wide variety of electric shaved ice machines. If you don’t want a single-purpose machine in your kitchen, as Alton Brown would say, you can also use a heavy-duty blender to finely crush the ice. Some powerhouse machines even include a “snow” setting to make homemade sno cones.

During warmer months, places such as Target and Walmart offer brand-name shaved ice machines in the seasonal section, sometimes offering them up for sale prices. 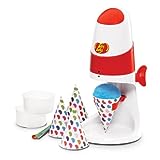 This machine is also available at Target. 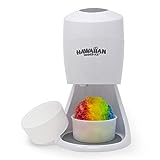 If you’re craving shaved ice but don’t want to buy any new equipment, you can make a type of ice called a granita in your freezer. The basic idea is that you fill a pan full of water and flavorings and put it in your freezer. As the water begins to harden, you break up the ice, scraping it into a fine slurry with a fork. The end result is a slightly crunchy shaved ice. Martha Stewart's site includes a recipe for a strawberry granita.

In addition to making your own shaved ice, you can gather it as well. When shaved ice was first invented back in ancient Rome and imperial Japan, it was made from fresh snow collected from mountaintops. Today, people still flavor snow and eat it as a natural, homemade treat.

One place where flavored snow is popular is in the Northeast U.S. and in Canada. The area is filled with syrup-producing maple treats, and a common treat is so-called maple snow, where snow is topping with fresh maple syrup. In this instance, vendors will offer maple snow or "sugar on snow" even in the harsh chill of winter. That is, after all, when it snows.

The amount of flavored ice you can make depends on the amount of snow you can gather and the syrups and flavorings you have on hand. Flavored snow is versatile and great as a snow day activity with kids.

If you live in a polluted, smoggy area, this recipe might not be for you. But as an occasional treat, flavored ice made from freshly gathered snow is tasty and magical.

Where to buy flavored syrups and how to make your own

In flavoring your shaved ice, you can use everything from flavored syrups, diluted vanilla extract, fruit juice, or cream. You can even use soda, although the carbonation can ruin the consistency of fine shaved ice.

Because of the large number of shaved ice vendors online, it’s not difficult to find places to buy shaved ice syrups. While you can technically use coffee flavorings on top of your homemade shaved ice--Torani's French vanilla syrup makes for a creamy, decadent shaved ice--you can purchase large bottles of pre-made syrups from dedicated shaved ice dealers. You can also find syrups specifically for shaved ice on Amazon. 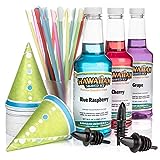 With three syrups, you can make rainbow ice.

If you’re craving an unusual flavor of syrup or simply want to make your own, it’s easy enough with common household ingredients. The process is similar to making flavoring syrups for coffee or spirits. With most syrups, you boil sugar and water until it thickens into a syrup, adding your ingredients either during or after cooking depending on how strong you want the flavor to be.

To make a cherry syrup, for example, you could add approximately a cup of water to 2 cups of sugar, put in two handfuls of pitted cherries, and boil on the stove until thickened. Strain out the cherries, and store the syrup in the fridge.

Other recipes for shaved ice online

If your tastes are more worldly, there are tons of recipes online for some of the global variants of shaved ice: