Gingerbread Facts to Tell Your Kids

Bake, Eat and Talk about Gingerbread

Everyone is busy at this time of year; winter, and especially Christmas is the time for baking. One of the seasonal favourites is gingerbread. Houses, gingerbread men, and cookies of all shapes and sizes can be baked using this delicious spice, but how much do we know about the history of gingerbread? I’ve been dredging up everything I know about it—not a great deal, but enough to tell the kids while baking or tearing open the packet, and eating gingerbread or cookies.

Some things that we take for granted actually need to be stated; otherwise they may seem so obvious to us that they get overlooked when we are talking to our children. One of those things is ginger. Even though we see it all the time now in its root form, at one time it was not found fresh in local supermarkets. Occasionally it was seen as a dried and wizened root that looked much like a twig, but usually it was bought in a powdered form and used by the pinch, or teaspoonful, in cakes and cookies. Make sure your children realize that the powder you use when baking gingerbread is the same thing you use when cooking Asian meals. You may be surprised by their surprise!

Where did Ginger Originate?

Ginger or ginger root originated in India and China, where it was first cultivated, and has spread to the Caribbean and East Africa. It is the rhizome of the plant Zingiber officinale and is part of the same plant family as turmeric and cardamom. It is thought that the Egyptians and Greeks used ginger as part of their ceremonies. Some say it was first introduced to Europe by a monk towards the end of the 10th Century, although it is also claimed that it was brought to Europe by crusaders returning from the Middle East during the 11th Century.

For nearly 2,500 years, Ginger has played an important role in Asian medicine as a folk remedy to promote cleansing of the body through perspiration, to calm nausea and stimulate the appetite. Ginger tea was also used as a digestive agent and in the treatment of colds and sore throats. It is also known to assist the immune system and is now becoming increasingly popular as people realize how helpful it can be in maintaining health.

Cast your vote for Hot Apple and Ginger Cider 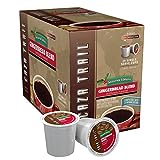