Susette has a lifelong interest and practice with good physical and mental health, including the environment that sustains us all.

In Old Town Pasadena there's an interesting sushi restaurant called A'Float Sushi. The name refers to a unique conveyance system that floats fresh-made sushi on boats around a central bar. Customers sit around the bar and pick off whatever dishes they want to eat. You can tell what price each dish is by the plate it sits upon.

My first impression of the place has not changed, even after going there off and on for three years. There's something intriguing about choosing food as it passes by in front of you, instead of from a menu. I like seeing the cooks in the center of the bar make sushi as you watch. And most interesting is trying to figure out how the water moves those boats along.

The bar is a fifty foot oval, with room in the middle for cooks, counters, and supplies. The structure that surrounds them consists of a 12" wide mirrored water trough, waist high, that propels boats around the oval, outside of which is a continuous counter that seats guests - four or five on each end, about ten on each side. It is always the most populated part of the restaurant.

The rest of the restaurant consists of tables set against walls, with a few TVs up high that guests or cooks can watch. When I went a few days ago, the TV was showing newborn puppy litters and a baby goat trying to play with, but totally befuddling them. I was there in the afternoon and traffic was slow, so the cooks watched occasionally as well, while I photographed the bar and boats.

There is a small waiting area near the front door, which is also where the cashier takes your payment when you've eaten, if you are in a rush. Otherwise, you can just sit at the bar and wait until a waiter is ready to process it. I usually go up front to the cashier.

The restaurant's atmosphere is not very datelike, i.e. romantic, but it is friendly and I always see couples there, along with families. I usually go there alone, and the waiters and cooks recognize me and greet me with warmth. Tourists must like it there too, because the restaurant workers were very open to my photographing.

Sitting close to other patrons at the bar gives you a chance to chat them up, especially if you don't know what the dishes are - there is usually someone well informed about sushi. Asking someone how the boats move is another guaranteed conversation starter. Here is what I have found out about that so far.

The boats are hooked together with chains. They are big enough to place three dishes in each base and one on the prow. The chain of boats move via a water propelling system that blows air directionally into the water from the bottom and sides of the channel.

As the water moves, it pushes the boats along fairly quickly. You need to quickly identify and grab the dishes you want off the boats as they pass by. This chain of boats is a variation of a typical way of serving Japanese sushi called kaiten zushi or "train style," where coded plates of sushi are placed on a moving conveyor belt in front of customers.

In the center of the bar, the Asian cooks look to see what's being taken. They make more to fill in empty spots and also make dishes from the menu upon request. Sushi or sashimi that hasn't been chosen after half an hour gets taken off and discarded.

The time of day you go is important. Because the cooks are committed to keeping the dishes fresh they don't fill up all the boats, if there are only a few customers. If there aren't many customers, then be prepared to order what you want from the placemat menu, instead of just waiting for something interesting to drift by.

There are several types of sushi served on the boats - many of them Western rather than traditional Japanese style - but most of them tasty.

Nigiri Sushi - This type has a slab of fish or egg tied onto a bed of soured, pressed rice with a strip of seaweed. Sometimes the fish is just laid on top. All rice used in sushi is soured with vinegar (good for fermentation and preservation as well). In fact, sushi itself means "sour-tasting." Nigiri means "hand-formed."

Maki Sushi - What we know as sushi rolls. Fermented rice is pressed onto a long strip of nori seaweed, topped with a string of vegetables and/or raw meat, rolled to enclosed the string in the center, then sliced down the roll to created small rolls we know as sushi rolls. Includes the Western style uramaki or "inside out roll" with the rice on the outside and some kind of light, fried coating or sesame seeds.

Sashimi - This is small slabs of raw fish served by itself, with a side of shredded turnips and a leaf of something like mint. This is especially tasty when the fish is really fresh!

5 out of 5 stars from 2 ratings of sushi

My body is Blood Type A, which prefers fresh food to cooked, green salads, rice, fish, and whole nuts and grains. Sushi is a perfect diet for Blood Type A's. Of course, because my body loved it, so did my taste buds. Once I got over the unique smell of fresh fish, I actually began to revel in it.

How Fresh is the Sushi?

Sushi tastes incredible when its fish is fresh and mediocre when it is not. I decided to find out when different types of fish could be considered at their freshest, assuming that fishing seasons must play a role. The chart below shows common sushi fish and the season/s in which they are best eaten.

Note - The following fish populations are being destroyed, due to overfishing for sushi. Please do not eat them: Eel (unagi), dolphin, whale, bluefin tuna (hon- or kuro-maguro).

The restaurant's menu is printed on green paper and used as a placemat, so each setting has its own disposable menu. At the bottom of the menu there are photos of the plates with different patterns and colors, along with prices overprinted on them. Dishes are listed above, organized by price.

As with other sushi conveyor belt systems, the pricing for each dish is determined by the type of plate the food sits on. Once a customer has memorized which price goes with which plate, it's easy to add up how much you're spending as you grab plates off the conveyor boats.

The most I have ever paid for a meal was $27, but I'm fairly conservative. Prices range from $1.98 per plate to $6.15 for the really great dishes, and you can also purchase green tea or sake, or a Japanese beer to drink.

Everyone ranks restaurants according to their own priorities and what they were looking for when they went in. An interesting restaurant will always get a higher ranking with me. Good food gets a high ranking too. Ambience also, but the importance of each varies, depending on what other factors are present. This restaurant has good food, though not always the best. Its lower prices make up for it. What really does it for me is the boats.

In general, this restaurant could be considered successful and popular. It's located in a high-cost area of downtown Pasadena and has been there for a long time. During peak hours there is often a line waiting. 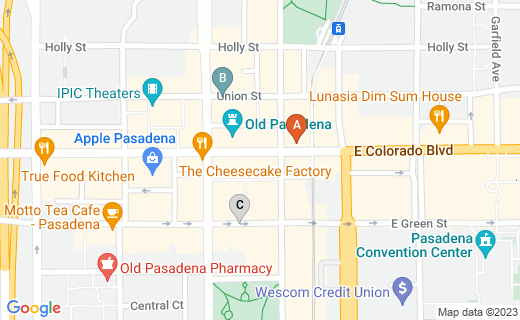 Old Town is the historic district of Pasadena that houses big, beautiful, refurbished buildings and stores with old architecture, along with great restaurants. Often considered the "real downtown," it is popular with tourists and residents alike. The area is pedestrian-friendly, with many of the crosswalks on Colorado Blvd. stopping traffic entirely, while pedestrians cross every which way.

A'Float Sushi is located right on Colorado Blvd., just east of such a crosswalk at Raymond Ave. Some patrons of A'Float Sushi have complained in online reviews about having a hard time finding parking, but there is actually a lot of parking within easy walking distance. The map on the right shows two garages that my visitors use when they come here. The Green St. garage is free for the first hour and a half.