Brigitte Thompson has been a realtor in Austin, TX, since 2007. Enjoys cooking and writing blogs about Texas.

4.2 stars from 6 ratings of GulaschCooking with the Power Pressure Cooker XL

Goulash in less than 30 minutes with the Power Pressure Cooker

German Goulash (Gulasch) The Power Pressure Cooker makes cooking Goulash quick and easy. Before cooking with the pressure cooker, it would take me about 1 1/2 to 2 hours to prepare the goulash, standing over the stove and constantly stirring. If the stew meat did not cook long enough this dish could turn out tough and chewy. Perfect tender and juicy every time. Cooks in 25 to 30 minutes! 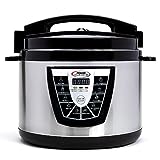 Safety Tips when cooking with the Power Pressure Cooker XL

Here are a few safety tips to keep in mind when using the power pressure cooker.

While the Electric Power Pressure Cooker is safer than your Grandmother's stovetop pressure cooker there are a few things to keep in mind.

Even though there are several safety features built into your pressure cooker. I strongly recommend that you read your owners manual to The Electric Power Pressure Cooker XL and Rice cookers.

1). Do not let children near the pressure cooker during the cooking process.

2). When using the power pressure cooker place the cooker in a location in your kitchen that will allow the steam to vent away from people, appliances, cabinets, windows or any other item that can be damaged from releasing the steam.

3). NEVER fill the pressure cooker above the MAX fill line.

4). Keep hands away from vent value.

5). Unlike stove top pressure cookers the vent value will not rock and spray steam. The Electric power pressure cooker will hold all the steam inside the pot. If steam is, in fact, escaping during the cooking process the value is not in the proper position. Using an oven mitt - Carefully adjust vent value until steam is no longer spraying from the lid.

IMPORTANT: Always remove the Pressure Release Valve and clean the opening with a pin to remove any blockage that might have occurred during the cooking process.