Joyva Halvah Review: Why I Love Halvah Candy and Can't Make it From a Recipe

Living with food allergies—both her own and her family's—has driven Chris Telden's lifelong interest in diet, health, and cooking.

What Do You Think of Joyva Halvah?

3 out of 5 stars from 2 ratings of What do you think of Joyva Halvah (any flavor)?

I love sesame halvah. It has more nutrition than most other types of candy and it tastes out of this world. I've tried to make it at home numerous times using this, that or the other sesame halvah recipe that asserts you can achieve that flaky store-bought quality. My goal was to make halvah that had the same tender, flaky, melt-in-your-mouth quality that Joyva had. I learned early on that it was doomed to failure. But I kept trying with boundless optimism, for the sake of my pocketbook. Which is, in hindsight, silly since I've since learned that tahini, an ingredient in halvah, and even bulk sesame seeds, cost almost as much as the halvah itself.

And then I did some deeper research online to try to figure out if it was just me or if anybody had ever had success at making homemade Joyva-style halva in a kitchen from a recipe. I found nothing. No success stories. Only a lot of hope, a lot of frustration, and a lot of steering off-topic to the differences in the different types of halvah. (And don't ask me how, but somehow I also ended up on a cool page about the old Carnation Breakfast Bars and how they're no longer being made and how thousands of people miss them so much they've actually taken a petition out to get them made again.)

After further research, I gathered that Joyva Halvah, the major brand of halvah sold in the U.S., is made by hand, with big burly guys beating the heck out of the candy using a musculature I can only dream of. Which meant I, a kitchen DIYer - somebody who makes her own pasta and bread by hand, not to mention popsicles, baby food, and sundry other homemade goodies - must now resort to buying halvah. Only there was none to be had in my area - not for a decent price, not in bulk as I intended to eat it.

Halvah had seriously nostalgic memories for me, even more powerful than my nostalgic feelings about chocolate ice cubes.

My first taste of it came when I was very young. My mom served Joyva halvah to guests at a party. She diced it up into small cubes and put toothpicks in them and served them.

I bit into one piece and couldn't believe what an amazing texture it had or how lovely the bittersweet taste was. It was lucky any of the guests got any of the halvah that year.

Years later, I tried to do the same and serve it with toothpicks. I never did get the trick of it down. All the cubes came apart when the toothpick was inserted. So I had to eat them myself. Pity.

When I was older, eating part of a bar of halvah every day after working in the summer as a college student was about the only thing that saved me from going insane from commuting from the north to the south side of Chicago every day - a good two hour bus ride each way, very long and very hot. Not surprisingly, the halvah was oily by the time I got it home - the oil tends to separate in very hot weather. But that didn't destroy the ecstasy. Not by a long shot. It just made it harder to get rid of the evidence. 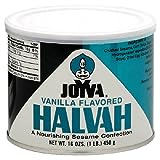 So, failing to find a copycat Joyva halvah recipe, I went ahead and ordered the 3 16 oz cans of Joyva vanilla halvah from Amazon.com. I like the marble halvah all right, and I know it's very popular, but I don't like it as much as the vanilla flavor - which doesn't actually taste like vanilla at all, but like the sesame seeds that are the main ingredient. The candy came quickly (though not quickly enough - I wanted it the next day but wasn't willing to pay the sums to indulge myself that far). It was very fresh, with no oil leaking at all.

It was the first halvah I'd eaten in years and it was delicious - flaky, tender, sweet but not too sweet. The peculiar, natural bitterness of sesame is somehow absolutely yummy when it's made into this flaky, delicate deli candy - not bitter tasting at all. Heavenly.

The only problem was slicing it without taking it out of the can. Since I was eating it myself (nobody else in my household is a fan of halvah, more fools them and lucky me), I used a butter knife to dig in and cut out a slice. Sometimes the halvah disintegrated into crumbs before I could get a piece out. So I just shook out the crumbs and ate them.

I didn't mind. I have no pride - or shame either, for that matter - when it comes to halvah. But since they were just crumbs, I felt no compunction about cutting another slice so I could have that utterly joyous sensation of sinking my teeth into that soft flaky sweet mass and feeling it melt in my mouth.

So I bought the halvah intending it to last at least a couple of months. I mean, I bought 3 lbs of the stuff. Maybe you've guessed the moral of this story. My 3 lbs of Joyva halvah lasted a little over one week.

I try not to think about it. I do know I'm going to order more. It's just a matter of time. Actually, it's a matter of convincing my spouse it will last longer this time. (The issue is not so much the tummy line as the expense. But when I point out that when halvah's in the house, I consume less cheese and dairy, which is absolutely not cheap these days, the halvah looks like a positively inexpensive indulgence.)

The ingredients in the vanilla halvah are:

No freebies were handed out in this review (alas!) See the author's disclosure regarding compensation for this article.