A member of the Moraceae family and the Morus genus, the mulberry fruit and mulberry bush comes in three varieties: white, red and black. The black mulberry is the edible, or at least commonly eaten by humans, version, whilst the red may also be used for animal feed due to its impressive protein content and the white has often historically been used for feeding silkworms.

In appearance the mulberry is either red, black or white, a pendulous fruit with the appearance of an elongated berry. In culinary terms, it is often used in pies and jams and wines. Grown on several continents, it is commonly available frozen or canned and may be hard to locate as the fresh fruit. Interestingly, it has a major role to play in cosmetics as a skin-lightening aid, although different varieties have different properties in this respect.[2]

As far as the culinary aspect goes, the mulberry has traditionally been used for pies, juices, jellies, wines and jams. You might want to try Marian Kleinsasser Towne's suggestion of fruity jam bars with mulberries: it sounds awesome![5] What is the availability of mulberries like? They are sometimes hard to locate as the fresh fruit. 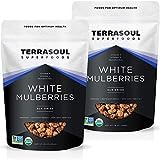 For humans, what does the mulberry have to offer in nutritional terms? It has one gram of fat content per one hundred and forty gram serving, two grams of fiber per 140 gram portion and has useful quantities of Vitamin C, iron and Vitamin K to offer.[4] Other phytonutrient aspects include the bioflavonoid content which has been found to be highest in black mulberries.[3] Of course mulberries could make a useful contribution towards your target of five or ten (or whatever) fruits and vegetables a day – just like any other fruit or vegetable! Any fruits or vegetables you have a fondness for are worth remembering when you’re trying to up the vegetable and fruit content of your diet.

[2] Begoun, P. 'Don't go to the cosmetics counter without me: a unique guide to over 35,000 products, plus the latest skin-care research'. Beginning Press: 2002

What do you know about mulberries?