How to Know Who Likes Vodka

Vodka is, many a bartender has observed, the choice of women and gays, mainly because of its low-calorie count. Which makes me envious, because I'm fat. It is also a good choice for someone who is being newly initiated into the world of alcohol. This is because Vodka is essentially neutral in taste, and it can be mixed with anything sweet, until it comes to resemble your daily breakfast juice with a kick. In 2013 the IWSR said Russian vodka ranks no. 1 in consumption globally with 4.44 billion litres drunk the year before.

Vodka is distilled to eliminate all esters or impurities until you are left with only pure alcohol. Some have compared its neutral taste to paint thinner. Others say it is more like the rubbing alcohol that you gently massage on a baby’s back. This may lead a pseudo psychologist to theorize that it results in an oxytocin rush, hence, its popularity. But I wander.

The benefit of its neutral flavor is that newbie tipplers can add anything for flavor, including the old reliable slice of lime. Or, you can get a brand that is already flavored, such as Karlssons which is peppery and expensive, Gordon’s Cup with tones of lime, black pepper and cucumber, Grey Goose (popularized by Chelsea Handler), to which you can add pineapple juice, Belvedere Pink Grapefruit, Stolichnaya with strawberry rhubarb, Tito’s Handmade Vodka with ginger beer and lime, and Akvinta Vodka from Croatia with fresh apple cider, to name a few.

The thing about vodka is that getting an expensive brand is no promise that the vodka will be superior. Consider instead, Stolichnaya which is cheap, but has a smooth taste. Akvinta Vodka from Croatia is excellent. Titos Handmade Vodka goes well with martini.

The earliest Vodka, (then called wodka), is Aqua vitae, which originated in Poland in the 15th century. But it was in Russia where the drink was grounded and flourished. There, the “w” became a “v”. Vodka in Russia means “little water”. It is a bran spirit fermented from grain mash of wheat or rye, distilled multiple times into spirit, and charcoal filtered for seminal purity. Some brands are made from potatoes or other agricultural produce with fermentable sugars. Vodka has never been oaked. It is a spirit of the purest alcohol.

Things a newbie should know about vodka

How Different People Have Experienced Vodka

We collated different experiences online that people have had with vodka, and so many people either love it or wonder why they don’t love it. There is no yes or no, right or wrong answer to the question. But here are some experiences culled online about people and vodka.

Vodka (the unflavoured variety) is quite tasteless, so it blends well with pop, juices, and even Kool-Aid without altering the basic flavor. Historically, it's cheap to make and, of all the 40% alcohols, the low-end version is probably the least offensive to the palate. At 40% alcohol rate, it gets you drunk quite quickly (saving cash). People also subscribe to the myth that vodka can't be smelled on the breath, so that you can hide your drinking. I'm living proof that this is not true.” 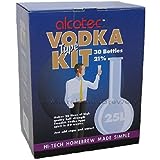 Alcotec Vodka Type Spirit Kit 21% ABV 25 Litre High Alcohol Home Brew Moonshine
I'm grateful this handy kit ships to the Philippines. It works rather well, and I have made a passable glass of Vodka with it. My friend does it much better with this kit. Well, practice makes perfect.
Buy Now

Other people's experiences with Vodka

3. “The girls who drink vodka don’t care about what you think of them. These girls are members of a pride; their fellow lionesses surround them and create a barrier that is impenetrable to any scrutiny. Cloaked in black and glitter, they toss their rainbow hair and raise their hands high in perfect synchrony with the music. They dance without vodka, and they dance harder with it.”

Would you have any experiences you'd like to share about drinking Vodka? Please do in the comments section. Even if you haven't tried it yet, I would love to hear your thoughts.