Susette has a Masters degree in Sustainable Development. She leads her local Green Council and writes for The Sustainable Business Review.

. . . Unless you're American. Then you boil filtered water in a kettle and call it a teapot. You pour it directly into a coffee mug (not a teacup), where a chamomile tea bag (not "real" tea) is waiting. You add whatever sweetener you like (usually honey) and maybe a little sea salt to taste (salt??). And you drink it while eating a toasted bagel, ignoring the glances of coffee drinkers surrounding you.

If you're British or from a former British territory, you boil water in a kettle, then pour it into a teapot, add black tea, and let it steep. Then you pour the tea from the teapot into a teacup. In the teacup you add half a cup of sugar and some milk and stir. You sip to test the temperature (with your little finger in the air). Then you pick up a bickie (biscuit/cookie), dip it into the tea, nibble what didn't drop in and sip the tea again, while discussing the royal family with your mates. See if you can use them to trigger tea party ideas.

If you're Asian you boil water in a kettle and go through a little official ceremony to get the green tea into the teapot. Then you carry the tea tray to each guest, pour a little tea into each tiny teacup with no handle (burning the hands of the guests) and try not to notice when someone hides the addition of a little saki.

Teapots and kettles come in all sizes and makes. Although they have their expected use, you can really use them for whatever you like. Here are some of my uses, followed by other teapot stories.

Someone in my family bought me this large tea kettle for Christmas one year. It seemed too big for one person, so it took me awhile to start using it. Now I much prefer it over any other tea kettle I've owned.

Technically, the difference between a tea kettle and teapot is that the kettle is used to boil water, while the pot is used to steep tea. The kettle is usually made of metal and is intended to stay on the stove.

The pot can be made with ceramic, clay, or glass and is often decorative. Once filled with tea and heated water, it is usually set on the table to steep while guests are sitting down.

The teapot on the right holds about enough water for two cups of tea. It's attractive, but small. When I got the big stainless steel kettle, I put this teapot in the cupboard and didn't touch it for a few years. Then I discovered a new use for it.

Today it's cold and rainy outside. My teapot is on the stove filled with water and aromatic herbs. The heat is on low and the smells of roses, mint, and eucalyptus fill the house, generating coziness and contentment. It makes my place feel like a real home.

Since I live alone, any evidence of something happening outside of me, other than traffic, gives me a feeling of company. I change my herbs depending on the weather, season, and any holidays. The smells create a great atmosphere for a tea party, should I decide to have one.

This pot didn't work for tea, since I pour boiling water straight from the kettle into a cup (I'm not saying what kind), but it's perfect as a scent diffuser. In spring, before it gets warm outside, I mix rose hips, lavender, and mint together. If I have a cold I use eucalyptus, mint, and sage. Over Thanksgiving, cloves, allspice, cinnamon and other Thanksgiving smells prepare me for spending time with family. Over Christmas, pine, myrrh, and frankincense are scents to experiment with.

Although this kind of pot does hold water, it is not used to drink, but to wash with. Some of the same preparation procedures are followed: Mix filtered water with sea salt and heat to lukewarm. Steep herbs in the water that help with breathing (eucalyptus or mint). Strain the herbs and fill the neti pot with the water mixture.

With head tilted sideways, pour water into the upper nostril, letting it roll out the other nostril. Breathe through your mouth. Then switch sides. This is the nose tea ceremony used to clean nasal passages in Ayurvedic circles.

It all started with the Utah teapot!

The Utah Teapot is a graphic of a simple white teapot that has been used to develop nearly the entire computer graphics industry. It started out as a simple, informal ceremonial CAD design.

As CAD software developed further, new graphic techniques and codes were tried out on the teapot - first the addition of colors, then texture, light reflections, and more advanced actions like 360 degree turns or making steam rise from the spout.

Although only a virtual teapot, this visual has contributed to the development of business and computer cultures worldwide.

The largest teapot in the world - much larger than anyone could drink from - is located in Chester, West Virginia (USA). It stands 14 feet tall and 14 feet wide. It was originally made in 1938 from a hogs barrel wrapped in tin, with spout and handle added. There was a glass ball on top to represent the lid. Inside the Chester Teapot the owners ran a concession hot dog stand.

Since then the teapot has gone through many renovations. In 1984 it was almost taken down by a phone company that bought the land, but was rescued by local citizens, and now stands on its own fenced and landscaped property as a non-functional city landmark.

Some teapot stories are downright scandalous. Teapot Dome, although it doesn't look like one now, did once look like a teapot before weather eroded it down. It stands in Wyoming USA in a vast area once covered by warm, shallow seas, which left behind extensive coal, natural gas, and oil deposits in its Cretacious rock formations.

In 1922 one of two oil operators, Sinclair Oil Company, was granted a low-cost lease to fields around Teapot Dome, which made the company rich. In return, the company found ways to enrich the Cabinet official who granted them the lease.

This caused a huge scandal when his peers noticed him living beyond his means. A government investigation ensued and he was fined and thrown into prison for accepting bribes, which became known as the Teapot Dome Scandal. It was the first time a US government official had been imprisoned for committing crimes during the call of duty.

The Teapot Dome Scandal: How Big Oil Bought the Harding White House and Tried to Steal the Country
This is the granddaddy of all American political scandals. It's a behind-the-scenes run through of President Harding's election by Big Oil and the subsequent massive transfers of federal lands to oil companies, complete with briberies, payoffs, and illegal campaign contributions.
Buy Now

"Love and scandal are the best sweeteners of tea." ~Henry Fielding, Love in Several Masques

It may be that some of the scenarios above are giving you great tea party ideas. Here are some others:

Big Oil handpicked President Harding and, through him, his Cabinet in order to further their own corporate ambitions. The citizens of Chester rallied to save their historic giant teapot for future generations. The Utah Teapot enabled the growth of computer graphics. The neti pot opens up nasal pathways. My ceramic teapot makes the house smell great. And my tea kettle does what a kettle should - boils water. What do all these teapots have in common? . . . umm, well . . . a name, a shape, a story, and maybe fodder for some great tea party ideas. 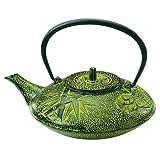 Old Dutch 38-Ounce Cast-Iron Nobility Teapot, Moss Green
This attractive Japanese style "tetsubin" steeps two medium cups of tea, keeping it hot for a long time. It is a true teapot, i.e. NOT for use on the stove, rather for brewing only. It contains a mesh basket perfect for holding loose tea.
Buy Now