How to cook Francesinha - The portuguese croque - monsieur recipe

A Francesinha or, according to a literal translation, the little frenchie, is actually a toast, an elaborate one, but still a toast.

I find that in my country we often name dishes in quite a strange way, we have dishes named after things that have nothing to do with them. For instance, we have a starter that is called woodpecker, but there is no woodpecker in it, so why is it called like that?

Like the woodpecker, the Francesinha has nothing to do with a little french woman. The only relation to France is that this sort of toast was invented back in the 60's by a Portuguese emigrant that had just returned from France and decided to adapt a very well-known french recipe - the Croque-Monsieur.

The actual recipe of Francesinha bears little resemblance to the actual Croque-Monsieur and has become enormously famous. Invented in the North of the country, more specifically O'Porto it can now be found anywhere in the country and there are now fast-food restaurants devoted solely to Francesinhas. The main difference from other toasts is the gravy of the Francesinha, it is quite unique and a secret for most Francesinhas' restaurants, so every Francesinha will taste a little bit different from one place to the other, but nevertheless it's always a wonderful experience. The gravy can go from an orange to a red coloration depending on its basis, it's a bit thick and the spiciness varies according to tastes.

The fact that the gravy is so good made people use it over other food, so today you can have a wet hot dog (a hot dog with Francesinha sauce on it) you can have wet french fries, a regular croque-monsieur with the Francesinha gravy... Well, you get the picture... Evolution of the Francesinha also brought us other types of Francesinha, now you can find it with shrimps or pork or vegetables inside, instead of steak, basically the sky is the limit and basically this works because it's all about the gravy and that never changes (almost). Personally, I go for the original Francesinha every day of the week, but then again, I'm all about traditional and classics, so...

Another good thing about the Francesinha is that it can be either breakfast, lunch or dinner. It doesn't matter what time you eat it... And it has everything, cheese, bread, meat, sausages, etc, etc. You can add it a fried egg on top, you can eat it with french fries on the side, you name it.

Mostly, in Portugal, people love eating it after or during a game of soccer (you can try it with football) with the company of good friends on one hand and a draught beer on the other.

SANDWICH (Per each person): 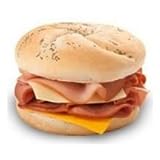 First, the gravy: Get a medium saucepan, turn on the heat and pour into the saucepan the beer and the chichen stock and allow the chicken stock to liquify in the beer. Add the rest of the ingredients, exception made to the corn flour and the milk. Once it starts boiling, immediately lower the heat and let the mix simmer for a while (about 5 minutes) over medium heat, stirring with the spoon every now and then.
In another recipient liquify the corn flour in the cold milk and add to the saucepan mix, stirring non-stop until the mix thickens. Take out the laurel leaves and use the stick blender to puree the gravy. Then try the gravy to make sure the harsh flavour of the alcohol disappeared by now, if it still tastes funny, let it simmer for a bit longer, so that the taste of alcohol is removed. Make sure you don't let the gravy burn to the bottom of the pan, as well as be sure not to let it thicken too much. Remove the gravy from the heat and let it rest, while you assemble the sandwich.

Now, some people pre-heat the sliced bread in a pan, before assembling the sandwich, others don't, therefore it's up to you. In time you will probably find out how you like it best. Personally I don't pre-heat it.

So, to assemble the sandwich, first you have to get the meats ready. Slice the fresh sausage and the smoked sausage in half (vertically) and grill them.

Please notice that the steaks should be as thin as possible. Season the steaks with salt and pepper and afterwards grill them also.

Once everything is grilled (except for the ham) put one of the bread slices onto to a soup dish and then place the slices of ham, followed by the grilled steak, the the sausage and then the cured smoke sausage. Cover with another slice of bread. On top of this put the slices of cheeses, covering the whole sandwich and then with the gravy. If you'd like you can add a fried egg before the gravy. Finally, put it in the oven for about 15 minutes.

Here is another way to do it...

I definitely think this a recipe worth trying. Check out the video above, since it will give you a good insight of how it's done. It may seem difficult, because of the gravy and getting it right, but it is actually quite easy and in no time you'll become an expert and will do it quicker each time and the thing is, all your friends will love it, so get to it and then let me know how it went...

Did you like this hub? Was it useful, entertaining, interesting… Don’t forget to leave me your comment and vote on the hub.

For more information check out my profile and stop by my other hubs.

Some other hubs by the author:

Algarve is not all about beaches

How to bake an easy cake

And if you enjoyed, maybe you can also join us here at Hubpages, it’s fun and free and you can click here.

© Copyright Feb 25 2012 / Algarveview.hubpages.com. To use part or the whole article you must first get written permission from the author. Feel free, nonetheless, to use an intro of the hub with a link to the article here on hubpages for the rest of the article.