Cast your vote for Bean Soup a la Jokai

Mor Jokai and Kerepisi Cemetary where he is buried

This soup is named after Mór Jókai, the Hungarian dramatist and novelist who died in 1904. Made with smoked pork hocks or pigs feet and smoked sausage and served with sour cream and small dumpling this is a very substantial soup and can be eaten as a complete meal.

I prefer to start with a leftover ham bone if I have one and I substitute kielbasa for Hungarian virsli which is almost impossible to find. I tried choriso, but it has too much paprika for my taste and plain hot dogs don’t have enough flavor.

Contrary to popular opinion, Hungarians use paprika in moderation and only occasionally add hot paprika to food. Hungarian peppers are on the low end of the Scoville scale (5,000 – 15,000 units) nowhere near the level that Bobby Flay and his disciples use.

Ingredients for the Soup:

Serve this soup with a dollop of sour cream on top of each bowl and some kifli (Hungarian crescent rolls) or pogacsa (Hungarian biscuits) on the side. If you don’t bake, simply serve some good hard rolls and butter.

Kumarno, Slovakia where Mor Jokai was born and Budapest where he is buried 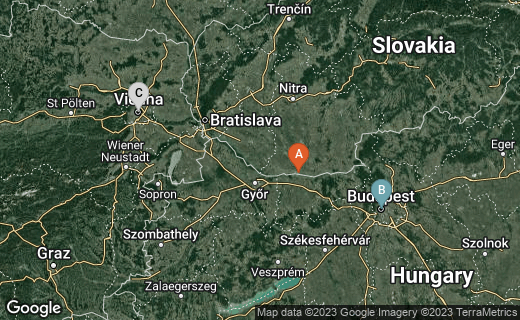