Italian food has deep roots in antiquity, the Etruscans, Greeks, Romans, and even the Arabs had some influence on what we think of today as Italian food. First came the Etruscans, they ruled central Italy before the Romans arrived. The Etruscans built the first true towns in Italy centered around what is now Tuscany. At first, the Etruscans ruled the Romans; in 509 BC the Romans overthrew the Etruscan King, Tarquin, and declared themselves a Republic. The Etruscans did have a written language which has never been deciphered. What we know about Etruscan food comes from their tombs which have wonderful murals of banquets that were held in honor of the deceased. The dishes included selections of fish such as Tuna, and meats such as hare, deer and birds and wild boar. Grapes were originally native to the Arabian Peninsula,, so it was probably the Phoenicians that introduced the Etruscans to grapes and wine to Italy around the 9th Century BC.

The Greeks Next to come were the Greeks. Between 800 and 500 BC the peoples of the Aegean lands colonized portions of Sicily and the southern Italy. Those settlements were part of “Magna Grecia” (Greater Greece). Centers of Hellenic culture, marketplaces for the ideas of Archimedes, Pythagoras and Plato, came to be in Italy, these ideas influenced Roman culture so much that today it is known as 'Greco-Roman' society. The Greeks, along with the Phoenicians, being a seafaring people brought their love of seafood with them. The first renditions of what we now call pizza were made by the Greeks. The Greeks baked large, round flat breads which they topped with oil, herbs, spices and Dates but it wasn’t until the 18th century when pizza first appeared on the streets of Italy

The Romans developed an empire that encompassed most of their known world and the Romans were known for importing foods from around their empire. The first Italian that left us written poems (which we have only in fragments) was Archestratus, a Sicilian Greek whose poem on gastronomy emphasized using "top quality and seasonal ingredients" and insisted that a delicate fish be sprinkled only with a little salt and basted with olive oil, "for it contains the height of pleasure within itself" (Athenaeus, 321d). The next written records we have for Roman cuisine come from Apicius "Apicius, the most gluttonous gorger of all spendthrifts, established the view that the flamingo's tongue has a specially fine flavor." Pliny, Natural History (X.133). De Re Coquinaria ("The Art of Cooking") is the oldest cookbook extant and was compiled out of letters attributed to Marcus Gavius Apicius, who lived during the reign of Tiberius early in the first century AD. Apicius’ food was not for the poor, the poor were mostly living on bread and gruels made from various grains but Apicius was wealthy and he indulged his appetites. He was said to have committed suicide when his account was down to ten million sesterces because he didn’t have enough money left to satisfy his tastes. The dishes of Apicius are very heavily flavored with the many spices, Garum and exotic ingredients that were available to him as a citizen of Rome. The Roman Empire lasted for hundreds of years adding goats, artichokes, leeks, and cheeses from Sicily as well as many other items to the cuisine. It was during the Roman years that bread making was developed as a skill and eventually a union of tradesmen, the Romans used wine as the leavening agent.

The Vandals, then the Ostrogoths and finally the Byzantines each took their terms ruling parts of Italy but leaving little discernible mark on the overall cuisine. The Byzantines, like the Romans before them were almost entirely interested in the production of grain.

The Arabs were the next group to show up and bring their foods when they invaded Sicily in the 7th century. Sicily was invaded by the Arab forces of Caliph Uthman in the year 652, only 20 years after the death of the Prophet Muhammad. The Arabs were soon driven out but after repeated invasions the Arabs ruled Sicily for a bit over 200 years between 827 and 1061. During the medieval period their influence was enormous. Sicily’s population doubled as towns and cities were founded and increased. The Arabs were called "Saracens" or "Moors," and it was during these medieval times that the Arabs were first unified as a people under Muslim law. The use of apricots, sugar, citrus, sweet melons, rice, saffron, raisins, nutmeg, cloves, pepper, pine nuts and cinnamon are all due to Arab influence over Sicily. Of course they also brought coffee, “coffee" comes from the Arabic qahwah, originally meaning "wine." Muslims being forbidden to drink wine, coffee became known as Muslim wine. By mid-7th century the rise of Islam closed off the European’s overland caravan routes and the Arabs had a monopoly over the spice trade. Durum wheat was brought to Sicily in the 7th century by Arabs and that probably dates the beginning of what we call pasta today. Couscous is still a staple in Sicily and every year marks a Couscous festival in Trapani. Before the Arabs brought durum wheat the Greeks and Romans had their own types of noodles made from various grains so the true beginnings of pasta remain a bit of contention and depends on how you define pasta. By the time Marco Polo came back from China, pasta was already recorded: “The first concrete information concerning pasta products in Italy dates from the 13th or 14th century”… “The legend of Marco Polo importing pasta from China originated with the Macaroni Journal, published by an association of food industries with the goal of promoting the use of pasta in the United States.” (wiki) 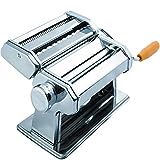 Medieval Times and the Renaissance

Medieval times saw the beginning of the many city states of Italy and each city state developed cuisines based on their local environment, foods and culture. As the medieval times waned these city states in the north of Italy gained in power and prosperity and in the 13th century Florence became a banking center. The De Medicis, a wealthy family of merchants and bankers, were patrons of the arts. This is when the Renaissance was born in Italy but the Renaissance was soon spreading around Europe. By the 14th century Venice was a major seafaring city state controlling most of the Mediterranean and was the center of maritime commerce, bringing in spices and other foodstuffs from the surrounding areas. Sailors who were involved in the spice trade spent long weeks surrounded by the aroma of spices and this actually delayed the use of spices in the port cities. Like working in a donut shop today you would quickly tire of donuts and the sailors didn’t want to flavor their foods with the spices they carried. Local foods were in demand from the commoners. Cooking was again being developed as an art as the wealthy had more resources to spend on themselves. In southern Italy poverty still prevailed but they developed a cuisine based on the foods that they could afford. Eventually this led to the popularization of the Italian foods we are most familiar with today. When the poor people of southern Italy later emigrated from there to other parts of the world they brought their poor dishes, pasta and pizza with them.

Everyone knows the story of Christopher Columbus sailing to the new world for the Spanish Crown, Columbus was a Genoese Italian. What may be less known is that on his and other Spanish voyages they brought back the tomato, corn, potatoes, hot peppers, squash, chocolate and the sweet potato. From Spain the new vegetables spread across Europe. This trade across the ocean is known as the Columbian Exchange and it marks the beginning of what we consider modern Italian cuisine.