There isn't any beef in the world with such quality, so tasty and savory, and so tender that melts in your mouth the way Kobe beef does. Seriously. There isn't.

Wagyu can either be black or red, and experts say the black cattle have the best quality meat. Either black or red, this species is famous for the marbled meat it produces.

Marbling
As well referred to as marbled meat, this is meat that contains a sufficient amount of intramuscular fat, evenly distributed, so as to give it an appearance of a marble pattern.

Waygu Kobe beef are only ready to be shipped to market after an impressive life of leisure, in a manner of speaking.

For around three years, these special specimens live what you'd call The Life. They spend about one peaceful year in pastures, and then are put on a high energy grain diet for around 500 days.

In most of the Kobe beef farms, not to say all of them, cattle go through massage sessions, which are intended to distribute the fat across their bodies, hence producing the marbled meat effect afterwards.

The daily feeding program also includes sake, beer, and even classical music, with the primary purpose that each and every member of the herd is happy and relaxed. Relaxing the Waygu Kobe Beef achieves two purposes:

Waygu Kobe beef is graded based on a series of factors, such as the marbling, fitness and texture of the meat, or the fat color.

Another gradation that Kobe beef is put through is the Beef Fat Standard (B.F.S.). One of the key factors here is the color, luster and quality of the fat. Again it's measured from 1 to 6, and "Grade 3" is the minimum one would require of Kobe beef.

Finally, there is a Fitness and Texture of Meat, which are evaluated visually. Grades range from 1 to 5.

To date, I continue to wonder what it would be like to eat a Grade 12 tenderloin. Then again, there was a time when I also wondered if I could possibly distinguish between the Grade 6/7 that we are and a Grade 4/5... but I didn't have to wonder long. I could perfectly distinguish when I ate lesser graded Kobe beef.

But from 7 up, I just have to continue to wonder as I haven't yet tried. I bet a good Kobe beef that it's easy to actually set aside a grade 7 from a 12, though. And not just through your pocket either! And that is to 'untrained' taste buds!

What my taste buds perceived that day in a rather regular restaurant in Kobe is that I was eating the best rib eye I ever ate in my life.

Past my taste buds and into my brain, I can't conceive ever eating any meat like that ever again, unless I happen to stop by Kobe again in future.

You Can Eat Kobe Beef in Kobe...

Kobe Beef is a Registered Trademark, a Denomination of Origin, that you can't find anywhere else in the world.

Of course, the many merchants of Kobe Beef around the globe would scream and shout that this isn't true. But it is. There are under 300 farms of genuine Waygu Kobe cattle in Japan, all in the Kobe area.

In theory, it's just not possible to supply the world with this wondrous meant. And they just don't. Most outlets where they do sell Kobe meet around the world, which are truly a handful, sell meat that "simulates" Kobe beef.

Simulates, you ask? Well, yes. Some do actually grow Waygu cattle in New Zealand or Argentina or Australia, or other parts of the world equally inclined to cattle growing. And they do use the same techniques as used in the Kobe cattle farms, in order to achieve very similar results.

Other Producers of Kobe beef

The New Zealander, Argentinean, Australian etcetera types of Kobe beef are certainly good enough. The cattle farms in those countries use the same type of cattle, Waygu, imported from Japan, and the same type of "treatment" to grow their cattle.

The migrated black and red Waygu beef are subjected to the same high-class, high-life breeding techniques than their distant relatives in Kobe, so I'm sure it's a good alternative, if one wants to experience the "beef of their lives" treat.

There's only one thing that'll make you sure and certain that you're actually consuming Kobe beef or something very much akin to it, and that's the check. The bill won't lie!

Just as an example, in Spain there is only one outlet for Kobe beef. And of course it's not from Kobe, it's from New Zealand, they do say so themselves. Per all literature on the matter, the next best thing to Kobe beef, is surrogate Kobe beef from New Zealand.

That's a pointer that it can't be the real thing. Within Japan, a Kobe beef kilo fetches approximately 600 Euro, close to $700 USD. So, outside of Japan, any Kobe beef that draws less than 650 euro per kilo is most definitely not from Kobe. It can be good, great, and positively delicious, it's just not the one and only Kobe beef.

Truth be told, post much research, it's very difficult, not to say impossible, to find Kobe beef outside of Japan. There's just not enough of it to be exported in any kind of profitable way, I guess.

A Bit of History of Kobe Beef 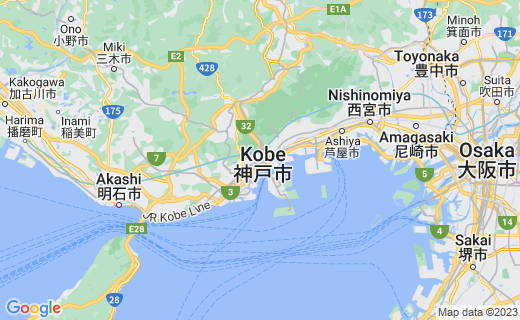 Waygu beef originates in Japan around the 2nd Century, when cattle was primarily used as a labor animal in the rice fields.

One of the versions says that the particular exercise the cattle were put through on the humid rice plantations helped their body fat seep and distribute through their bodies. Over time, these animals became their own peculiar race.

The other, more plausible version states that at around the Second Century the consumption of meat to complement rice and similar fare was becoming extensive, but there wasn't enough good quality meat to feed the population, seeing as most animals were used for labor and thus had a hardened body.

At the time, it occurred to farmers that they could massage the cattle in order to make their meat a bit more tender... thus the history of Kobe beef likely began.

Japan's isolation over many centuries first, and later the strict cattle import/export regulations helped keep the purity of the Waygu race.

Today, Japanese Government strictly regulates Waygu beef production, forbidding its export with the goal not to "pollute" the purity of Waygu cattle.

Obviously, some Waygu studs made their way over to different countries... Those had to be crossed with other races, thus not completely eliminating but definitely mixing up the purity of the authentic Kobe beef.