What is Korean Bibimbap??

The name Bibimbap means "mixed rice.” Pretty straight forward description in my opinion. First, rice is placed in a bowl, and topped with various selections of of vegetables, sprouts and a meat of your choice whether it be pork belly, sliced beef or minced beef. Also with sautéed vegetables called namul, accompanied with soy, gochujang and doejang. Doenjang is a soybean paste that that is savory and packs an umami punch. Gochujang is a flavorful red chili pepper paste that brings a bit of spice. When the time comes to eat, an egg is freshly cracked and placed on top then mix the hot ingredients together, with the egg and sauces. Adding a cooked sunnyside up or fried egg is an alternative if adding raw egg isn't your thing. As the consumer, you have complete control of how the dish is finished.

As a rice enthusiast, I definitely appreciate the many cultures that have some their own approach to a rice dish. In Spain, it was all about the Paella to which i searched for endlessly while visiting. Bibimbap is considered Korean due to most of it's components. Namul, for example, is a name for various sautéed and seasoned vegetables. The vegetables used are always what is in season and can include chicory, soybean sprouts, daikon radish(a favorite of mine), and gosari(bracken fern) which can be cooked in various ways such as steaming, fried, or blanching. Namul is essential to the dish just as the rice is.

Bibimbap derives from Goldongban, which is a similar dish utilizing a bowl of rice with vegetables, sauce, and meat. Bibimbap's first recipe was first shared in a 19th century cookbook called Siuijeonseo.

Gochujang is a Must

Gochujang is the "Korean Sriracha." It is not just a puree of chili, garlic and sugar as with many hot sauces but is a red chili base with fermented soybeans, salt, and rice powder which makes it thicken. In the 18th century, the recipe at that time required years of fermentation outdoors in terracotta pots, or on a special stone called a jangdokdae. Fermentation is mastered in Asia but specifically the Koreans. Gochujang packs a lot of flavor and a little heat and sweet similar to Sriracha. Bibimbap is not Bibimbap without Gochujang.

Doenjang Adds a Savory Umami Flavor That Makes All The Difference

Use Good Rice, Not Instant Rice 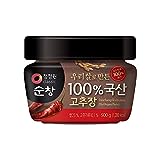