Fond memories of Seattle WA and Vancouver Island BC innundate me with smiles on a regular basis. The region is spectular in beauty and peace. One particularly good mental image is that of the last breakfast I had in Seattle on a trip to that city a few years ago. A Korean market and food shop was open early in the morning as my group passed by. We had visited a local Starbucks for vente sized bold roast coffee. Delicious! We were also hungry, but not for pastries and we wanted something else.

We approached the Korean shop that served lunches and dinners and found that they could provide breakfast among their other preparations for the day. Familiar enough with some types of Korean fare to be able to prepare and enjoy them, were were all eager to try their breakfasts. Sitting beside the shop at cafe tables, we could hear the sizzles of cooking and cling-clangs of utensils, while we inhaled the flavorful aromas of healthy foods. A ship's foghorn leant muscial accompanyment to an altogether unique world in which I'd like to spend at least one lifetime. It is a treasured memory. The breakfast bowl of grains and accompaniments was tasty and filling, with a variety of pleasing aromas and textures. With the addition of a few cooked beans fo 2-3 varieties.the dish would have become the traditional kongbap and even more filling..

I found our Korean breakfast hearty and good tasting and tradition - derived from a centuries-long lineage of food preparation.

Long ago, Korean cooks poured all of their culinary skills and efforts into grand breakfasts and dinners, leaving a tiny lunch for a pick-me-up snack that did not interrrupt the long work day. Such is a grand tradition of life and a lot of work gets done on a substantial, healthy breakfast early in the morning.

Peacefully tired out from accomplishments of the work day, diners can celebrate life with a good evening meal and retire to pleasant dreams under a smiling Asian moon. Moon Feasts, in fact, are a vital part of Asian and First Nation cultures, used to celebrate life and resoruces in thanksgiving with healthy grains and other foods.

A Simple Bowl of Grains

Rice is a traditional and good-tasting part of the Korean breakfast. Rice is often combined with other grains and this is its draw for me. The combination provides a variety of tastes and textures among a range of aromas wafting from a single bowl, This single-bowl method of dining is my favorite. Different grains emit different aromas and together, form a rainbow of delicious scents that complements accompanying flavors and creates an aura of well being around the senses.

The breakfast rice bowl I received was combined brown and white rices, with barley and mung bean sprouts. Toasted sesame seeds and some seasame oil were included, with a bit of torn seaweed (nori) for color and flavor. Soy sauce was an ingredient, along with thin curling slices of spring onions and a bit of sugar. Fresh ground black pepper was a delicious addition. While this dish is only one part of a full Korean breakfast is the old tradition, it is tasty and filling by itself.

An improved cooking method for brown rice was developed during 2004, the UN-proclaimed  International Year of Rice that celebrated rice as a staple crop and foundation of nutrition in the majority of the nations on Earth.

In the newly developed cooking method, brown rice is first washed and then soaked in warm water (water at 38° C/100° F) for a full 20 hours before mealtime preparation. The warm water soak results in a forced germination of the rice that activates rice enzymes. This process results in obtaining a larger number of amino acids from the rice, including the important GABA.

As Westerners, we may be more accustomed to eating packaged cereal in which grains have been pounded and processed into flat frosted flakes. These foods may be better suited to the dessert menu and many people do eat bowls of cereal at the end of the day before retiring. Once I enjoyed the cooked grain combination I was served in Seattle, it became a preference if I was to eat grains for breakfast.

Whole Foods company tells as that barley is very healthy, with a consistency resembling pasta and a nutty flavor that I enjoy. it can also be toasted and brewed as tea or fermented and made into beer. High in fiber, it contains many minerals our bodies can use for health and to fight disease.

Brown rice has long been known to be a healthy food. High in mineral content, it is extraordinarily high in manganese. Altogether, brown rice taken regular helps women to control body weight and fight cancer and cardiovascular conditions.

White rice is brown rice that has been processed to the point of removal of husk, bran, and germ, which contain most of the nutrients. Then it is polished to appear shiny, removing more nutrients. Enriched white rice by American law then has the addition of vitamins B1, B3, and iron. White rice is not the primary nutrient source in this dish, but adds fiber and texture to a bowl of cooked breakfast grains, along with its B vitamins and iron.

I first discovered bean sprouts in college when a group of friends began sprouting seeds for salads. Mung bean, soy bean, and alfalfa sprouts have been my favorite sprouts.The less substantial alfalfa sprouts are good on top of salads, but disappear into the breakfast grain bowl, so I stick with the other two for that dish.

Purchase brown rice, white rice, and barley in bulk at a market such as Whole Foods or similar store. Alternatively, purchase 5- to 25-pound bags of these grains in Asian or Mexican markets and in chain or locally-owned grocery stores.

Store all of these grains in a cool, dry place in your home, well sealed and protected from insects and mice or rats. You may need to place grain packages inside larger bags or boxes for added protection and on shelves as well, rather than on the floor of a basement of pantry. Large 30-gallon or even 50-gallon rubberized plastic containers with well-fitted lids are another option for very large purchases: place large bags of grains into these containers and fit the lid. Brittle plastic can crack and allow water and vermin into the grain, so rubberized plastic is better, being more pliable.

On your kitchen counter, store portions of brown or white rice and barley in air tight counter canisters or similar containers. For longer-term storage of rices and barley, consider using the 5-gallon bucket system illustrated in the video below. This is an effective system for safely storing your grains when purchased in large bulk quantities, during discount "sales", and in preparation for emergencies or disasters. If you have 100 or more pounds of rice, for instance, the 5-gallon buckets are easier to move than 1 huge rubberized (claen) trash can full of grain. 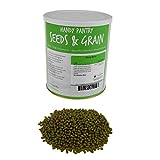