This isn't a restaurant review. In some ways, it's more of a love letter; my family have been steady customers of the Lavender Asian Bistro pretty much since it opened back in 2003. There's no lack of alternatives, but Lavender has few peers for the quality and presentation of its meals, the warmth and professionalism of its service--or for sheer, unadulterated value.

What, you ask, is an "Asian Bistro" anyway? Well, a "bistro" is defined as a "small, modest, European-style restaurant or cafe," and that fits fairly well: Lavender is relatively small, located in an unassuming strip mall, and nevertheless upholds high standards for cuisine and ambience. And it's "Asian" because the menu choices encompass both Chinese and Thai culinary traditions, from Szechuan chicken to Mongolian beef to Pad Thai and a whole range of beautifully balanced curries.

Lavender is the brainchild of Mr. James Wang, and embodies the lessons of twenty-five year in the restaurant business. Newly arrived in the US back in the days of the Reagan Administration, Mr. Wang served an informal but arduous apprenticeship in New York restaurant kitchens, starting as dishwasher. It was a time of building skills and knowledge, but of building relationships, too: a co-worker from the New York days became a fast friend, and has been a Lavender cornerstone, serving as head chef since opening.

It sounds a classic American success story, but it isn't only about the money. Mr. Wang--who has interests in other restaurants in the Atlanta area--tried to retire a few years ago. But a year of inactivity was too much; twelve- and fourteen-hour days of hard work, achievement and involvement were apparently just too hard to give up. Clearly, he is a man who is exactly where he wants to be, whether it's out front greeting customers with his customary warmth and humor, or back in the kitchen working with a new undercook to make sure that he has grasped the "Lavender way."

"Lavender way?" OK, I made that up--but there is a microculture of commitment to quality that you can both see and feel.

But what's the place actually like? Well, the environment is pretty generic. It's in a small strip mall, the most prominent feature of which is a Chevron gas station. It's neat and clean enough, but, it must be admitted, not very distinctive. But that changes once you get past the entryway, past the inevitable "specials" board.

Inside, it's both warm and elegant. The décor is burgundy and gold--almost mustard. It's warm but not overpowering, and (perhaps not entirely coincidentally) reminiscent of the local high school colors. (It's a new color scheme, by the way--back in 2008 an unattended child scratched a great many of the original lavender-painted panels within reach, and $12,000 later, voila! Burgundy and gold.)

The tables are lit by hanging fixtures with colorful glass shades which look much like inverted martini glasses. Lighting is muted, though not to the point of obscurity; the bar against the south wall--resplendent with gleaming inverted glassware, colorful labels and the traditional mirror--is partially blocked from the main dining area by a room divider giving privacy to two lines of booths.

There's a raised area with more booths along the north wall, and larger circular dining tables fill the cozy space between. Tinted windows along the east wall afford a view across the parking lot and highway--perhaps it's just me, but the pine trees across the road always seem to be the focus--while protecting diners' privacy. The west wall affords what might be called a "semi-open kitchen." Windows show off a spotless kitchen from about chest level up, giving an impression of white coats and stainless steel, occasionally enlivened by a quick flare as a dish gets the flambé treatment.

You'll be greeted warmly as you arrive, quite possibly by name if you are a regular customer, you'll seated promptly, and will be contemplating your culinary options (ice water in hand) before you know it. There's a lunch menu featuring smaller portions and prices, and separate dinner listings for the Chinese and Thai dishes. The Chinese menu is the larger of the two, and I suppose it's fair to say that the Thai side is Americanized; Mr. Wang learned his Thai cookery in New York, after all. You won't find searingly hot curries here, unless perhaps by special request.

But it was the Thai side of the menu that first drew us in, and it's the side I still order from most often. For example, there's the omnipresent Pad Thai, the wonderful appetizer known as Nam Tuk--a savory mix of meat, onions and spices to be wrapped, taco-style, not in flatbread but in fresh green lettuce leaves--and a couple of wonderful soups. (My favorite is the Chicken Coconut; lime juice counterpoises coconut milk, and the chicken is enhanced with savory mushroom slices.)

The curries are wonderful.  Whether red, green, Panang or Masaman, they are fully-flavored and satisfying, with luscious mouth feel and a satisfying bite.  Yes, the heat is far short of authentic Thai standard, but it's just right for the North American palate.  Each variety is just a bit different, despite sharing most major ingredients, but I must admit that articulating just how goes beyond my descriptive skills.  Perhaps the green is a touch milder, the Panang subtle sweet, as the menu suggests.

But the Chinese dishes certainly hold up, and we haven't ignored them over the years, by any means. Again, the choices are somewhat eclectic, with Mandarin, Szechuanese, Hunan, and even Singaporean dishes figuring in the mix. Some of our favorites have been the pot stickers--always a fun appetizer; the Mongolian beef, spicy and hearty; the exotic Mango Prawn or Mango Chicken; Tangerine Chicken (sometimes we'll order this with beef instead, though it's not on the menu as such); and several of the various fish dishes.

Whatever you order, it will arrive looking absolutely elegant--sometimes even with its own specially-chosen dish, complementing the food with suitably chosen color and shape. Nor will the portions disappoint; this isn't the sort of place that relies purely on satisfaction of the eye and palate. Your stomach will be happy, too.

If there's a down side to those generous portions, it's dessert--that is, you may not have left enough room for it. Dessert is a fairly minor portion of the menu, with only half-a-dozen choices. But those choices are unusual enough to merit mention: Ice Cream, not only in the flavors you might expect, such as Coconut or Mango, but the quite unexpected, and unexpectedly delightful, Green Tea Ice Cream. Banana Fritters, Sticky Rice, and Fried Ice Cream--the last a tableside ritual as well as a dish--have their fans, too.

Wines and drinks are another strength.  The wine list isn't particularly pricey, but it is thoughtfully selected; advice on food and drink pairings is available for the asking.  It's worth mentioning here that Lavender mounts occasional Wine And Dine events, featuring preselected combinations of food and wine on a fixed price basis.

In the end, I suppose that Lavender for me is more than the sum of all these strengths, though. It's our history there, too; it's the family dinners, when we needed to celebrate something; the romantic birthday dinners for two; the casual post-church lunches with friends; and the post-hike Saturday outings where we relaxed and grew expansive over the second bottle of wine as we laughed--happily replacing all the calories we'd just burned out in the fresh clear Georgia mountain air.

I want to say that you can't buy that--but, of course, you do. Excellent value though Lavender may be, you do get a check at the end of the meal, you are expected to pay it, and, if your service is as good as that which we've always received there, it's only fair to put a good solid tip down, too.

But there's something extra there--a spirit of art for the sake of art, of going beyond the expected, just for the joy of it. And when you go, and laugh, and taste, and enjoy, you can be part of it, too--a necessary part of the process. Part of the give and take.

Make that a happy part of the give and take. Give it a try.

Other Hubs By Doc Snow 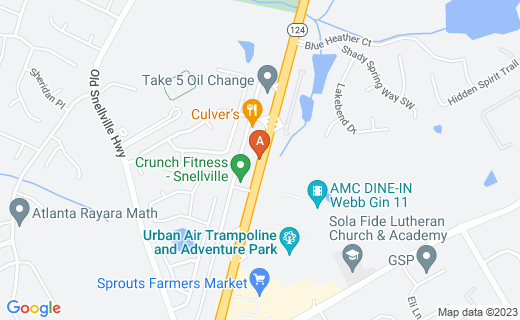 Lavender Asian Bistro is in Suite C8 of this unassuming strip mall between Snellville and Lawrenceville, GA.