A Healthier Way To Still Have Potato Chips

For most of us who are on a diet, potato chips would seem a prohibitive addition to our daily intake. However, these potato chips are an incredible way to cut calories and still feel like you are 'indulging' a bit. Just remember to keep in mind the calories and make sure that they are not in excess of your daily allowance. Watching your diet is one thing, but any weight loss or weight maintenance plan still has to be fun.  You can't eliminate everything! With this recipe, you are able to do both. I found this recipe in a Cooking Light magazine some time back and modified it a bit to my own tastes. They also add a blue cheese dip to the recipe, which I will note below but I find that they are fine without the dip - or use a dip more to your personal tastes.

NOTE: You can use a mandolin to slice the potatoes or any good slicer to get good thin slices.

Probably way more information than we ever will want to know about chips but here it is!

Calories for 1/2 cup chips and about 2 tablespoons of the dip approximately 120.

How To Make Chips In The Microwave

How They Are Made Commercially 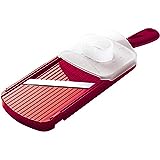 Great Cooking Ideas On The Lighter Side

Here Are Some More Ideas On Homemade Snacks and Different Chips