This story about our first experience making maple syrup is the second of the "Funny Farm Chronicle" stories about our family's antics and adventures on our Central New York farm.

I really didn't have enough to keep me occupied on those long winter days in those first years on The Funny Farm. We moved from New Jersey to very rural Central New York in the middle of the summer when gardening, kids, goats, and the house kept me busy. Throughout the summer, the kids and I enjoyed hiking our woods and fields gathering berries and apples and foraging for wild food. Encourage by my back-to-nature friends as well as Euell Gibbons' books, I experimented cooking wild foods as well as some interesting vegetarian recipes. But after the episode of cooking soybeans in The Pressure Cooker Misadventure, I had put the back-to-nature stuff on a back burner for a while.

Cabin Fever after a long winter

The exceptionally long winter of 1969 started on October 6th when we got 10" of snow. We were thrilled to have the opportunity to try out our new toboggan as well as the old wooden skis we found at an auction. The snow snowed and the wind blew, continuing through October, November, December, January… It was a very long winter! By the end of February, the novelty of snow had long worn off, and we were all feeling some cabin fever.

Our little town had a nice library that we haunted for reading material. Determined to pursue my idea of living off the land, I discovered some great books, and was pleased to find detailed instructions for making maple syrup. In January and February, everything was still buried under four feet of snow, and it seemed a little premature to think about gardening or stalking the wild asparagus. Imagine my delight when I discovered that there was something we could produce while the ground was still white!

Our old farm happened to have a stand of sugar maples, and we were all eager to try something new. Making maple syrup seemed like the perfect thing.

If you live in the northeastern states where sugar maples grow, you know that March can be blustery and cold, but can also have warm sunny days. As soon as the days start to warm up, and the sap climbs up the trees, it's time to get out the sap buckets and spiles, the drill and bits, the toboggan and cooking pans.

Making Maple Syrup by the Book

According to my books, early March, when nights still dipped below freezing, but daytime temperatures rose to the 40- 50°F was the perfect time to make maple syrup. The family agreed that it would be fun to try it, so we set out to find spiles (spouts put into the tapholes of the tree to collect sap) and sap buckets at our local farm store. We planned to collect the sap in buckets and cook it outdoors in the old, traditional way.

Unfortunately, our wood lot was nearly a quarter mile from the house at the back of our property. In early March, that quarter mile was covered in about three or four feet of snow. No problem. We tied our toboggan onto the back of our crawler tractor, loaded on the buckets, drill, spiles, kids, dog (we never went anywhere without the dog) and made our way out to the woods. There were several trees that were the required 10" or more diameter. Bill and the boys drilled the holes and set the spiles and hung our buckets. We placed covers on the pails so that dirt and squirrels didn't fall into the sap. It was exciting to watch the sap begin to drip into the buckets. Now, all we had to do was collect forty gallons of sap so that we could make a gallon of syrup.

While waiting for the sap to collect, there was much to do. Some friends who inadvertently removed much of the wallpaper in their house told us that it wasn't a good idea to try evaporating the syrup indoors. The steam and moisture can destroy the décor! So we collected firewood and built a stand for the large evaporating pan that my husband built. Next, we needed something to put the sap in when we collected it from the woods. We were able to get a 50 gallon stainless steel drum that was just perfect, and set about cleaning and disinfecting it. Now all was ready.

We waited…and waited…drip…drip…drip... The first lesson we learned is that the sap only runs during the day when temperatures rise well above freezing. By the next afternoon, the temperatures had risen and we collected about 20 gallons of sap to sled back to the house for cooking. I was pretty sure we could make the syrup by dinnertime. (Haha…)

Finishing off the Maple Syrup

Few people realize how long it takes to make maple syrup. Until we started collecting and cooking the sap, we had no idea of the time it would involve. We tended the wood fire long into the night and began again the next day. When it seemed to be getting syrupy, we started testing it with a thermometer. The syrup stage on a candy thermometer is 219°F. Because the syrup would burn easily once it got close to this stage, we cooked it to about 200°F and then poured it off into a pot to finish off inside the house where we could watch it closely.

Is it syrup, yet?

How thrilled we were when the correct temperature was finally reached and we had syrup! But the syrup had a foamy, scummy look on top and dark specks were floating in it. Many old-timers traditionally dropped a slightly beaten raw egg into the syrup and cooked it for a minute. The egg seemed to gather up impurities as it floated to the top. We skimmed off the foam and egg, then strained the syrup through cheesecloth. At this point, virtually every surface and spoon in our kitchen was sticky, but we were thrilled as we bottled our 2 quarts of syrup and admired its beautiful amber color.

As our second batch was cooking down, we had a great idea! We would make maple sugar snow (sometimes called maple wax or maple taffy depending on the locality). To make the maple taffy, we continued cooking the maple syrup to the soft ball stage (235-240°F).  When the syrup is the correct temperature, it's poured onto a paper plate of packed snow. When syrup meets the cold, it hardens, and the sweet maple taffy is picked up and eaten. There is NOTHING else in the world like it! Many people who grew up in maple sugar country remember maple sugar snow as a childhood treat, and it sure didn't take long for it to become an annual tradition in our house.

Making Maple Syrup -A Money Making Business For Our Teens

In later years as the boys got older, we expanded our little operation and were able to make enough extra syrup so that the boys could sell some half pint containers of syrup at the local Farmer's Market. We always kept enough to use in cooking and baking, and even cooked some down into maple sugar. I still buy maple syrup for pancakes and waffles and to use in Butternut Squash Casserole and Maple Cake.

If you're interested in writing, why not join the HubPages community? Write on any topic that interests you and earn money, too. It's free and fun! Click here for more information: Join HubPages

Looking out the window at the wet spring snow, I can still smell the mixture of maple and wood smoke that marked the maple syrup season in New York. Our few gallons of maple syrup cost us only a little hard work, but the sweet memories are priceless. 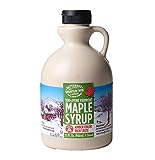