Now that Pennsylvania liquor law has made it easier for small local breweries to operate and sell their brew, one would expect entrepreneurs to select the Reading, PA area as a likely location. After all, the city boasts once having the 5th largest brewery (obviously NOT “micro”) in the United States, the maker of Reading Premium Beer. A population historically dominated by German, Polish and Ukrainian ethnic groups loves its brewski. However, although a few pubs offer many beers from tri-state area micro-breweries, at the moment there is only one operating microbrewery and one hopeful start-up in Berks County, PA. 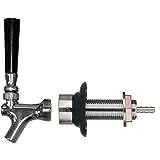 The Kutztown Tavern is an upscale restaurant permitting casual dress, frequented by both hungry locals and corporate and the nearby university bigwigs. It provides contemporary American cuisine with local flair and its own handcrafted microbrews. The brewery, Golden Avalanche Brewing Company, is on-site. The Tavern also features large and small banquet facilities.

The dining room is open 7 days a week. There is also a Tavern bar open 7 days per week. Furthermore, there are two private rooms for parties or meetings. One seats up to 36 people and the other seats 125 people. Menu packages and bar services available for both rooms.

Following a traditional German style of brewing, Golden Avalanche beer is made with only the finest malts and hops available. The Tavern offers the five signature brews and up to three seasonals. They assert:

“The draft selections of Golden Avalanche Brewing Company are all
formulated and handcrafted to produce the highest quality drinkable beers. To achieve our goal we have brought together the finest German engineered brewhouse with the best available raw materials, and the skill and experience of our Head Brewer, Bob Sica.

“The Golden Avalanche Brewing Company family of beers are brewed according to the German Purity Law of 1516, the Reinheitsgebot. This ancient edict is still observed today in Bavaria and requires beer to be brewed naturally with only water, malted grain, and hops. The three distinct yeast strains our brewmaster selected are all obtained from German sources, and ensure our unique fresh flavor and distinct character. No added preservatives, pasteurization, artificial colors or flavors are ever used in our production process. Even our bubbles are natural in our beers, using the carbon dioxide from fermentation to pressurize the beer.”

These five draft beers are: 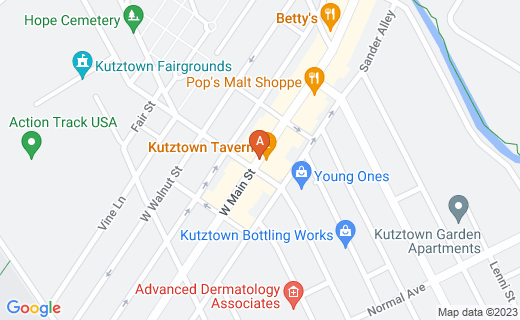 Parking is behind the Tavern, accessed through an alley.

Saucony Creek Brewing Co. is a start-up hoping to succeed as a craft brewery in Kutztown, PA. The brewery will be located in the old Saucony Shoe factory building on the banks of the Sacony Creek. Although the spelling of the creek’s name was changed to Sacony sometime in the past century, however, the principals decided to keep the historical spelling of the name.

Their goal is to craft and brew beers made with locally grown ingredients. When it opens, it will distributing on tap at pubs and taverns in the local area. They hope to develop a flagship pub, perhaps at the extant Kutztown Pub, with a tasting taproom, socializing lounge, and outdoor beer garden. They are starting on a very modest, nano-brewery system, through Kickstarter. 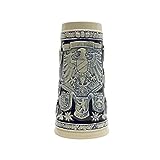 Enjoy your pub sampling and remember to hire a taxi or designated driver!