Sliced Ham - Cooked Whole or Sliced in a Cooking Bag

The directions on my ham said:

Ready to cook - cooking instructions: Preheat oven to 325 F Remove packaging from ham Place ham face down in an oven pan. Add 1 cup water to pan. Cover pan tightly with foil. Roast until meat thermometer inserted into thickest portion of ham, not touching the bone, reads 160 F to ensure thorough cooking (approximately 17 - 20 minutes per pound) Allow ham to rest for 5 minutes before carving. Oven temperatures may vary and your ham may take longer than the approximate time given to reach proper temperature. Always use a meat thermometer to verify correct meat temperature.

Ok - Let's Be Silly For a Moment

Face down, it says. Well. My assumption is that there is a round side and a flat side and that the flat side is the face part.

You know me. If there has got to be a face, I need to put a face on it. So, I looked at the flat side, and - sure enough - if you looked at it with partially closed eyes, you could almost imagine two eyeballs, a nose and a grinning mouth. I helped it out a bit, by making eye balls with honey and a beard with brown sugar.

I put a face on my butt. Now, put in oven pan face down. Well. I have a roaster pan, with cover that I will use. It's a nice, black, enameled pan. I had to use my larger pan, since the ham was just too big to put in the smaller roaster pan.

I would have used my slow cooker, but - today is a cold day outside and the house could use a bit of help in the heat department, so - a couple hours of running the oven should do double duty. The kitchen will be warmer and the house will smell nice..

It smells nice because I took a few things and put them on my ham before I started roasting it. I made the face on the bottom with honey and brown sugar and cinnamon. Yeah, enough honey to make two one inch eyeballs and a nose [I used the bone-in for the nose] and honey for the mouth, which was a crevice in the ham. Remember the beard I was talking about? The brown sugar was sprinkled across the lower side of the ham so that it had a nice beard below its mouth.

Then, I flipped it over and covered the entire ham with drizzles of honey, brown sugar and a few shakes of cinnamon. Then, for my fluid, instead of 1 cup of water, I used Simply Orange juice with the pineapple flavor.

I then closed the lid on my roaster pan, instead of covering with foil, opened my oven door and placed the pan on the lowest rack.

The ham weighs seven pounds, so I figured 147 minutes of cooking time.

Then I Sliced It

Ham is round and it has a bone in the middle. I loosened up the bone from the meat with a large bladed knife. I thought it would make carving the ham easier for me when the ham was done.

So. When the timer went off on my stove, I looked in the oven. I poked the meat thermometer into the meat and the temperature was well over 160 degrees. The brown sugar/cinnamon on the top of the ham had almost caramelized to the point of looking blackened. Thank goodness that I opened the oven when I did. Actually, I was outside and missed hearing the timer go off and so it roasted a little longer than it was supposed to.

It didn't seem to hurt it. I flipped over so the dry, darkened pieces were laying in the juice. The directions said to let the ham rest. Mostly, let it sit so it firms up a little and it soaks up the juices in the bottom of the pan.

The whole purpose of roasting the ham was to have slices for sandwiches, so I just let the ham cool in the pan for a while. Every so often, I flipped it over again so it was soaking in the fluid on the other side. I flipped it over a few more times.

I used my electric knife to slice it. My hams grain was running running from back to face. For slices, slice it cross the grain. You will see short lines in the ham and you cut across them. If you cut the ham with the lines, it won't look as nice.

You do it however you want to, but I cut mine across.

Fool Proof Ham in a Bag

Reynolds makes large plastic bags for cooking turkey. You usually get two bags and two plastic ties, plus baking instructions and recipes in the box. It's all very convenient.

For a baby shower, I sliced up ham for hot ham sandwiches. I used a large turkey bag and placed the bag in the crock pot. I then sliced all my ham and placed it in the bag, inside the crock pot. If I were just going to do the ham that day, from not frozen, I'd just heat it for a few hours, still on warm, until it was at least 165 degrees.

It took about 70 slices, stacked up, to fill it. Then, I put the plastic tie on the bag and took everything down to the freezer and froze it, in the crock. After it was frozen, I removed the crock, and the bag of ham was frozen in the shape of the crock.

A few weeks later, I got the bag of frozen ham out, and placed it in the crock and let it partially thaw for a few hours. I used a cup and filled it half full with brown sugar, added a layer of cinnamon, perhaps 3 tablespoons. I didn't measure. I thought about spicy carrot cake seasoning, and added some ground ginger and nutmeg to the cup. It needed fluid, so I poured some ginger ale soda into the cup and mixed it up. It was a little thick when I poured it out over the ham and then, I filled the cup with water, just to wash the spices from the cup. Poured that water on the ham.

Sealed the bag with the plastic tie that comes with the bag, and closed the lid on the crock pot. Put it on warm and for 8 hours, and let it thaw and merge.

Apparently, it was good, because I got a phone call after the shower asking for the recipe. 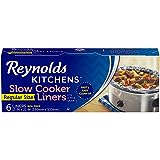 Reynolds Kitchens Slow Cooker Liners, Regular (Fits 3-8 Quarts), 6 Count
This is the bag I use. I use it for ham in the crock pot. Recommended!
Buy Now