My cheap nutcracker broke when trying to crack a hazelnut (also known as a filbert). I decided to carefully consider what nutcrackers are available and pick the best one to replace my broken nutcracker. See this article that details the list of nutcrackers I reviewed and the criteria I used to pick the best nutcracker.

After I checked out nutcracker options and selecting the Texan York Nutsheller as the best nutcracker, my wife thought it looked good and we decided to order it on Amazon. Unfortunately, my wife forgot about this and ended up buying another nutcracker at Target. Looking at the available nutcrackers in the store, she selected the OXO Softworks, which sells for about $14.

Which is the Best Nutcracker?

The Texan York Nutsheller is a pliers style of nutcracker. It has a pivot joint near the end and jaws that move on the far side of the pivot from the handle. Instead of crushing the nut shells, the Texas nutcracker cuts the shells open. The advantage is that this makes less of a nut and does not crush the nut meat along with the shell. I had never seen this type of nutcracker before, and honestly was a little skeptical that it would work well.

Another interesting option for nutcrackers is a kind of nutcracker called an "inertia nutcracker". This type of nutcracker uses a strong rubber band to propel a piston into the nut to break the shell without damaging the nutmeat.

You place the nut in the inertia nutcracker, place a shield over the nut, then pull back the "hammer" against the rubber band and let go. The hammer impacts the nut, breaking it open.

I had plenty of nuts on hand since my previous nutcracker broke and I had no way to crack the nuts. I had Pecans, Walnuts, Hazelnuts, Filberts, Almonds, and Brazil Nuts available for testing. Brazil nuts are challenging to open cleanly- these typically shatter and have small bits of nut trapped in the shell fragments.

The Softworks nutcracker is excellent at crushing nutshells. However, it also tends to crush the entire nut along with the shell.

The Texan York Nutsheller allows a lot more control in opening nuts. I would say what it does is to crush a very small part of the shell in a line. I was able to get perfect Brazil Nut out of the shell without any damage to the nutmeat.

I am pleased with how effectively I can crack nuts with the Texan York Nutsheller. If the goal was to crush nuts, I would pick the Softworks nutcracker. However, the goal is to get nuts out of the shell with as little damage to the nut as possible. The Texan York is great at doing this.

The handles and mechanical components seem to be sturdy and I would expect them to last a long time. I am a bit concerned about the "blades". I don't know if these get dull quickly or not. I did see that you can buy replacement blades instead of replacing the entire nutcracker. Since I do not crack that many nuts, I would expect the "blades" to last a long time. The blades perform more of a controlled crushing than cutting, so I suspect they would work well even if they do get a bit dull. 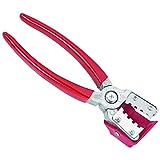 Experience with the Texas Nutcracker

The Texan York Nutsheller is really different from any nutcracker that most people have used. I had first time success. I watched my kids using it. One of them cut a Brazil Nut in half, rather than carefully cutting through only the shell and then stopping. The result of cutting the nut clean in half was still pretty good- you just get two large pieces of nut rather than one intact nut.

The blades may be a concern for small children, but since the handles are pretty large, I think it would be hard for a child to get his or her fingers between the blades when using it. I guess kids could get hurt with regular nutcracker as well, so it is probably best not to let small children use either kind of nutcracker unsupervised.

One drawback for some people would be the appearance of the Texan York Nutsheller- it looks like a tool from the garage rather than something that looks nice in your kitchen or on the dining room table. But I think having neatly opened nuts without shell fragments and bits of nut shattering everywhere more than compensates for the tool-like appearance.

Both the Texan York Nutcracker and the Softworks nutcracker claim to work for lobster and crab legs. I think either style would work well for seafood. Since the seafood meat is soft and the shell is somewhat flexible, it does not shatter like a nut when crushed. It would be interesting to try the Texan York on seafood.

If you are looking for a nutcracker, consider the

Texan York Nutsheller. I have enjoyed using it so far and it seems to work better than any other nutcracker I have tried for getting nuts cleanly out of the shell.

If you want a "normal" nutcracker, there are some sturdy models available including the Softworks nutcracker and others. Look for thick handles for maximum comfort and long handles to provide enough leverage to open strong nuts- like those darn Hazelnuts!