Origin and History behind "Shish Kebabs."

Where did this tradition start?

Tradition has it that the dish was invented by a medieval Turkic or by Persian Soldiers who used their swords to grill their meat over an open field of fires.

Empires and Commoners would enjoy it for breakfast with naan or pita.

The word was first mentioned in a Turkish script of Kyssa-i Yusaf in 1377, which is the oldest known source where kebabs is mentioned as a food. The first meat used was lamb and beef.

A Doner Kebab means "rotating kebab," in Turkish, it is a slice of lamb, beef, or chicken slowly roasted on a vertical rotating spit.

In Middle Eastern Shawarma, Mexican tacos al pastor, and Greek gyros are all derived from Turkish doner kebab, which was invented in Bursa in the 19th Century by a cook named Haci Iskender.

Meats were usually marinated to tenderize and to get rid of the gamey flavor.

Where did the name come from?

The term or name "Shish Kebabs" which many people spell wrong and usually spell it as "Shish Kabobs or Shish Kababs," comes from Turkish words literally meaning the word "skewer" and "roast meat," and is a Turkish signature meal.

It was written that Christopher Columbus was fond of Portuguese espetadas, which is a beef shish kebab marinated in wine and roasted on an open fire.

In the Us we generally have the traditional meats, veggies, and fruit which usually may consist of beef or chicken, pineapple, mushrooms, onions, bell peppers, and tomato.

In the Oriental cultural in some form or another they have satey, which is roasted skewered meats, served with a dipping sauce usually made with peanuts.

Japan has yakitori, which is grilled skewered fowl.

In Mexico you may see meat and pineapple or mango with chili peppers.

In Bulgaria, the word kebap refers to meat stews with very few or no vegetables.

I can go on about the many different varieties of kebabs each culture may have but that would be a lot, and I am just talking about basic and a few traditional kebabs.

In my photos I shared, I wanted to share how I made my Shish Kebabs.

I started out cutting up my desired choice of meat which was beef and chicken into bite size pieces.

I bought Lawreys marinated bottle of steak sauce and the terriaki sauce for my chicken.

I marinated each meat in the sauce for several hours. You can place in ziploc baggies or in a bowl that is covered and place in the fridge.

Then I cut up my mushrooms, onions, bell peppers, and pineapple.

Took my meat out after marinating it for a couple hours and made beef, mushroom, onion, bell pepper kebabs. With my marinated teriyaki chicken I skewered the meat, pineapple, mushrooms, bell peppers, and onion.

If you have a child that is a picky eater like mine let them choose their own meat to skewer like my son chose hot dogs, then they can build what fruit or veggies they want.

Stick on a grill outdoors or in the oven.

Cook to your desire. Some may like their beef more rare than others, but please cook your poultry thoroughly.

Was this information interesting and helpful?

Cast your vote for Shish Kebabs 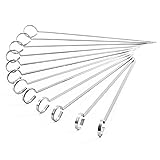