Palm jaggery in India and its health benefits

Palm jaggery is almost like a jaggery that is made out of sugarcane juice. Palm jaggery is made from the sap extract of Palm Trees in Southern India. These trees are also known as Toddy palm trees or Palmyra trees . The Jaggery is processed from the unfermented Palmyra tree sap called neera in kannada language. It is highly priced due to its medicinal properties. It has an intense, earthy taste or reminiscent of chocolates in its taste.

The palm jaggery obtained after processing is darker and richer in colour. It is slight salty to taste but much healthier of the two. Due to its cooling effects over human body, it is of high value. It does not have the bone meal content which is used for whitening processed sugar. The price of the palm jaggery is double that of sugar.

The first extract of the palm juice which is boiled at high temperatures, is being added with a little salt. The added salt then acts as a preservative. This also prevents the jaggery from becoming too sweet. When it gets cooled, it is poured into a long cone made of palm leaves. The preservation of the final product is done by wrapping the cone with rice straws. At home, the consumers finely slice the cone, so that the jaggery is cut into disc shapes leaving a palm ribbon around its edges. Some families simply dry the extracted palm juice on mats. Others do it on lime floors called the kobas . After it dries, the jaggery is being stored in an air-tight container which preserves it for nearly one year.

People of northern and western India prefer the sugarcane jaggery. But the people of the South, especially the South Kanara district, will not see beyond palm jaggery when it comes to adding this sweet flavoring agent to their home made sweet dishes. In Kannada language, the localites of the south kanara district call it Ole Bella.

Palm jaggery is quite popular in the Southern states of Tamil Nadu (called Karupatti vellam or pana vellam), Karnataka (it is called thaati bella in some places and Olebella in Mangalore, which is believed to be the best), Kerala and Andhra Pradesh.

In the south Indian families of the coastal region of Mangalore and also the Keralites of the Malabar coast, palm jaggery has a big role. It is used in the preparation of delicacies like payasams and neyyai appams. Mangaloreans use the same to prepare puddings and sweets. In temples, it is distributed with banana, or a bit of coconut, as prasadam . In the Calcutta city of West Bengal state, it is an important ingredient in sweets like Payeesh, Nalan gurer sandesh and Nalan gurer moa.

Why the palm jaggery has to be fed to the cow?

The body temperature of few hybrid cows fall down after a calf is born. Their neck gets tightened and breathlessness might follow. As per the veterinary doctors, the reason is lack of calcium content in the body. If immediate action is not taken the cow may reach to the coma state. The calcium is supplied to the body in the form of liquid. If palm jaggery is fed to the cow problem gets solved.

Three or four weeks prior to the birth of the calf, 100gm of jaggery is being fed for 5 days. After its birth ¼ kg of jaggery is fed so that there is no calcium deficiency. It is advisable to feed the minerals to the cow, if it is too weak and in unhealthy condition. 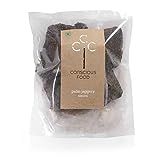 Palm jaggery utilization has spread to the East and West Bengal and the consumption is more in cities of the Bihar state, too. Like most other commodities, the commercial production of jaggery has also been corrupted by the lime addition to create it in larger volumes. In the Southern states, the consumer need not fear of such adulterations, because most families are having the palm plantations. They make their palm jaggery production, at their own houses. They use only the first extract of the palm juice, for this purpose.

Mangaloreans expect the basic ingredients to be available to them all the time. They are discerning eaters. So, they depend on Mangalore stores that have mushroomed all over India. All these stores provide them with Palm jaggery which is finally in the form of hard discs. The sweet dish, payasam prepared at home does not taste good for these people without the palm jaggery.

It is available in websites like weiku.com. Even though nutritional content is far greater than all other commercially available sweeteners, confirm the product quality before buying them online. Palm seeds are very juicy and tasty.