The Diner Formerly Known as Zinn's

If you traveled the Pennsylvania turnpike through the Pennsylvania Dutch country in the Reading and Lancaster area anytime from the 1950s until the 1990s, you likely noticed the signs advertising Zinn's Diner as being near Exit 21 in those days. The exits have been re-numbered and it is now exit 286.

If you followed the signs and got off the turnpike, you probably recall the larger than life figure of Amos, a stereotypical Pennsylvania Dutch man, standing near the entrance to welcome you for some Wunderful Gudt food or to keep you company while you waited outside for an inside seat, table or booth.

As I recall from eating at Zinn's many times while traveling, the choices were adequate and the daily specials were Pennsylvania Dutch cuisine.

This is what I remember at the entrance to Zinn's 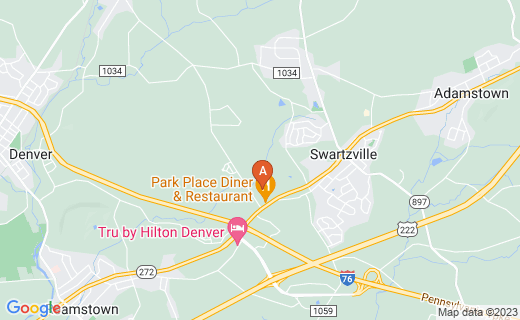 While I was driving through the Pennsylvania Dutch country in December 2008, I twice had the opportunity to stop at what used to be Zinn's and see what the diner is like now that it is Park Place. On my first visit, I was by myself and chose a seat at the counter. The second time, I was with my mother and we opted for a booth. The first visit was on a Thursday around 7:30PM and the second was the same time on a Sunday.

I decided to stay with the traditional Pennsylvania Dutch cooking the first time by ordering chicken noodle soup and chicken pot pie, which were part of the daily specials. The soup came in a small cup and had wide noodles and was served at just the right temperature...good and hot! The pot pie was a colorful treat for the eyes and was very filling. Instead of having a crust, the pot pie had noodles and filling was made of chunks of chicken and vegetables in a thick, rich gravy. I washed it down with two glasses of unsweetened iced tea and was so good at satisfying my appetite, I had to get my piece of chocolate fudge cake "to go". Each course was served before I had time to send a text message to a friend. All that food came to about $12.

The second time, my mother was with me and again we ordered from the specials, but this time I had a chance to notice the rest of the menu as well. It is very extensive and has a much larger selection than Zinn's diner had. Mom had the Yankee pot roast and I ordered the meatloaf in mushroom gravy. While I didn't taste the pot roast, Mom seemed satisfied with it and my meatloaf was enhanced by the mushroom gravy which was thick and had the hint of tomato flavor. My vegetables were pickled beets, served chilled and mashed potatoes. Beets also were served as a garnish on the plate, so I got a little extra there! The only unfortunate thing was that they were out of one of the vegetables we both wanted to try, the lemon baked potato. Again, the portions were very generous and Mom got some of her food "to go" along with some lemon meringue pie. The two meals totaled about $30.

I visited this Diner again in August 2009 and the food quality and quantity remain quite high.

I was fortunate enough to be passing through the area again around 8:30 on a Sunday night in mid-May. I was travelling from Virginia to New Jersey and I was tired and hungry and so were my two passengers, so I suggested this place to them. They agreed.

The biggest difference I noticed this time is the selection is very extensive and varied. While they were out of some specials, it was easy to find something we wanted even from the specials menu. The service was prompt, the portions were generous, (one person took some home), and since no one ordered dessert, the total for three people came to just over $30 including tip.

If you pass through the Pennsylvania Dutch country in Denver, PA and you want some good food, I can heartily recommend the Park Place Diner.

There is another good reason to get off the PA Turnpike. Gas prices were lower along Rte 272 than they were on the PA Turnpike by 20 to 30 cents a gallon! Yes, I filled the tank before I continued.