Pea Soup Andersen's: The Place to Go in the California Central Valley

Buellton is a rural town of 3,748 people in Santa Barbara County, tucked in the bend where 101 meets Highway 246. Much of the 2004 film "Sideways" was filmed in the small San Ynez community but otherwise little else happens there.

Buellton does, however, hold the title of being the "Home of Split Pea Soup."

Determined to discover and test the merit of this unique moniker, my best friend Nicole and I planned to visit Pea Soup Andersen's restaurant. It is Buellton's greatest asset, attracting millions of customers a year from across the country. Nicole's parents had taken her to Andersen's 11 years ago when she was eight and she had left with good memories and a happy tummy. It was her idea to make the trip back down together.

I had been fairly familiarized with the eatery by only passing references. Billboards featuring the its Dutch mascots Hap-pea and Pea-wea adorned the historic El Camino Real from my hometown in Sonoma County to Cal Poly - San Luis Obispo, where Nicole and I are undergraduates. Though only somewhat of a split-pea fan, however, I was up for something different.

On a gray and wet Veteran's Day Nicole and I were set Southbound on 101 for Pea Soup Andersen's from Cal Poly - San Luis Obispo. Empty stomachs and a 69-minute drive made for optimal appetite-forming conditions. After a drizzly drive of hilly landscapes and iPod tunes we turned onto Avenue of the Flags, where Anton Andersen and his wife Juliette had purchased land and built the restaurant in 1924.

A green cauldron-shaped sign featuring the restaurant's mascots and the name "Pea Soup Andersen's" loomed several feet over Nicole's red car at the entrance of the parking lot. The same name topped the wood-thatched roof of the restaurant at the corner of the block. Small windows with white-and-green striped sunshades were placed in random places on the building front. The white walls shone dimly against the light gray clouds, which combined with the cool air to craft the perfect soup-consuming weather. Two sturdy palm trees, lush bushes of various greens, and red azaleas thrived alongside the building - upshots of a recent beautification project by Milt Guggia, who purchased Pea Soup Andersen's in 1999. He also owns 9 other restaurants in and around Santa Maria and Lompoc, including the Western dining hall AJ Spurs.

Guggia recently purchased the other remaining Andersen's in Santa Maria.

"There used to be five, but they expanded too quickly," said Tony Pickard, the general manager. "Now there's one owner for the restaurants again and he's striving for consistency between them both." Continued Picard, "Milt has put a lot of work in Andersen's.

Other executives wanted to get rid of Hap-pea and Pea-wee but he said, ‘No way.'" On the right side of Andersen's was the staple of every great tourist attraction: a board with face-sized holes where people could put their heads and have their picture taken. In this case they could be either husky Hap-pea with his chef hat, apron, and mallet raised, or little Pea-wee dressed to match and cowering with a chisel held over a single pea on a table.

As we approached the board, a middle-aged man with dark graying hair and mustache and a blue polo shirt hustled from his car. "You guys need someone to take a picture?" he asked holding out his hand for the digital camera. The man waited with smiling eyes while we positioned our faces in the board. "People are always asking me to take their picture," he said with a chuckle as he walked led the way to the restaurant entrance and held the door open with the same grin.

The entrance was decorated with various Dutch family crests and a sign with the words "Velkommen to Andersen's" engraved in blue old-style calligraphic letters. Inside to the right was a one-room Christmas gift shop complete with ornaments and sound-activated Santas - open all year round.

"We like to provide items travelers can't get anywhere else," said Picard, the general manager of Andersen's.

On the left was a retail area featuring more perennial gifts, such as lotions, stuffed animals, and books with titles like Funny Fax of History and The World's Dumbest Criminals. Rosemary Mohan, wife Anton and Juliette's son Robert, opened the gift shop in 1941. The expansive room alongside the gift shop shimmered with white walls, silver chandeliers, and adobe-colored tiling. Catered events are held here - the Juliette Room, as it was appropriately called.

Finally, after passing shelves stuffed with gift food items like Andersen's Danish Cookies and cans of Andersen's many soups, Nicole and I stood at the brink of the dining experience unlike any other. White icicle lights hung from every wooden ceiling rafter, brightening the room and adding a seasonal touch once thought could only be found during the holidays. Every table was either occupied with munching, casually dressed diners or was being cleared by bussers with black tubs and rolling carts.

Within a minute the host led the way to our seats, weaving through tables clothed in white and each with bowls of soup atop. We were seated at a polished oak semicircle with dark brown vinyl-cushioned seats and various sauces and spices such as a bottle of "Pea Soup Andersen's Seasoning" in the center. On the adjacent walls were wooden-framed photos of Hap-Pea and Pea-Wea, who were redrawn by Disney-trained artist Milt Neil in the 1940s, in numerous poses and scenes. One picture showed the beady-eyed characters being dropped in blue blanket bundles from a stork's beak.

The clear choice, however, was the "Traveler's Special" at the top left of the menu. The defining point was the fact that the bowl of Andersen's pea soup was "never-ending." This along with a continual supply of crackers, cheese and pumpernickel breads, and a drink or a milkshake was priced at $8.95.

"The other things on the menu don't compare," Nicole said as she closed her menu. "The pea soup is the way to go."

In a heartbeat the waiter arrived to take our order, clad in a pressed white button-up shirt and black pants. He jotted down two Traveler's Specials and in less than five minutes Nicole and I each sat before a 9" blue-rimmed bowl of the notorious yellow-green specialty. Immediately the spoons delved into the soupy substance, which was Juliette's own prized recipe popular with the restaurant's first customers.

Andersen's pea soup was salty, perfectly warm but not scalding, and delicious. It did not have the most distinctive flavor, but the slightly grainy consistency and the feeling of smoothness and warmth down the throat made for a more-than-satisfying repast. The drinks and the bread were secondary, the latter serving as an ideal instrument for scraping the remaining pea soup out of the bowl. The omnipresent image of Hap-pea and Pea-wee materialized on the bottom, which signaled the need for two more bowls.

By the end of the second round our stomachs were visibly protruding and pea soup no longer sounded appetizing. Nicole placed five wrinkled bills between the empty china bowls while I paid the $21.01 tab at the front counter. As we twisted our way back out through the restaurant the bow-tied host bid good day as he hurried with two water glasses to a table.

Before stepping back outside into the overcast weather, my eye was caught by a large leather-bound guestbook sitting by the door, its full pages exposed to the cold air. Nearly 60 other signatures from that day alone preceded our scribble.

The Honda sat at the other end of the parking lot, covered in a thin layer of mist. Walking through the lot, which rests over the Buell family plot, we passed several weary travelers turning up their collars and pushing their vehicle doors shut as they shuffled to Andersen's. The restaurant is consistently busy, especially in summer school is out, people are on vacation and nearly 2000 seek pea soup every day. Tour busses frequent Andersen's, which splits more than 50 tons of peas annually compared to the single ton it took to meet demand 82 years ago.

"It's all about taking care of the customers," said Picard. "We never close. We're open 365 days a year, from 7 a.m. to 10 p.m. Travelers want to come in, eat, and get back on the road. "We're not really changing. If anything, we're trying to go back to tradition. Andersen's has been in business for 82 years - a lot of businesses can't say that anymore." 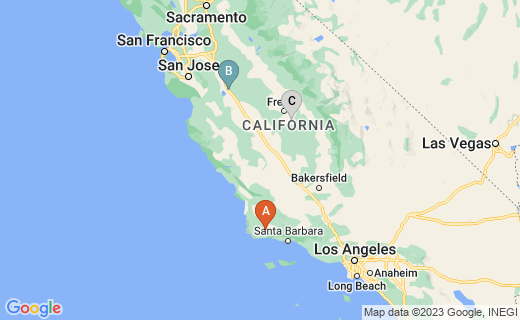