Peeps - What are They and Why do we Eat them at Easter?

Peeps in a Range of Colors

Colorful fluffy marshmallow chicks and bunnies are a common sight in the months preceding Easter. Peeps, typically pink, purple, blue and yellow are a staple for many Easter baskets and a quick search of the internet will display a wealth of recipes for cakes, snacks and treats.

Although peeps are now available at other holidays in the form of snowmen, pumpkins and hearts to name a few, they are an essential part of Easter for many. Why they have become part of the Easter celebration? What is it that people love about them?

A display of Peeps in a store at Easter

Peeps are produced by the Just Born company based in Bethlehem, PA. The founder Sam Born, a Russian immigrant opened his first store in Brooklyn, New York selling chocolate and candies. The company thrived and acquired several other candy companies. In 1953 Just Born acquired the Rodda Candy Company of Lancaster Pennsylvania who produced a line of marshmallow products. At that time the Rodda company produced a small line of sugary marshmallow chicks that were painstakingly made by hand. Sam Born's son Bob designed a mechanical way to produce the marshmallow chicks. Today around 4.2 million chicks can be produced in one day, taking six minutes to make one peep compared with 27 hours to make the original marshmallow treats.

Until 1995 Peeps were manufactured in pink, white and yellow. Since that date, orange, purple and blue have been introduced and a wide range of flavors including chocolate, blue raspberry and sour watermelon are available. In 2010 chocolate was added to the Easter chicks list. Chocolate dipped marshmallow chicks, chocolate covered marshmallow chicks and Peepsters - a bite sized piece of marshmallow flavored crème dipped in chocolate. These soon became available at other times of the year in different seasonal shapes.

Play dough Made from Peeps

Why are they Popular?

For many people nostalgia is one of the key reasons they buy Easter Peeps. They remember eating them growing up and it's their go to when filling an easter basket. There is a wide range of products using the Peeps theme which highlights the popularity of the candy. In 2009 Peeps lip balm in grape, strawberry, vanilla and cotton candy flavor were introduced. Coloring books, cuddly toys, nail polish, umbrellas are only some of the products available. There are now Peeps retail stores for customers to visit to buy these products and they are also available online at the Peeps store.

A quick search online will bring up a wealth of recipes and crafts using Peeps illustrating the popularity. There are sites dedicated to the use of Peeps as both decorations and edible creations. There are even people who collect and make art with Peeps or their packaging. People go crazy for Peeps and there are even competitions held. The Washington Post hosts an annual Peeps contest. In 2014 the competition was to

'make a diorama of a famous occurrence or scene. But remember: Whatever your design — a historic, current or future event, or a wink at pop culture — the main characters must be played by Peeps.'

A search of their website will give you a peek of past entries and how imaginative people are with Peeps.

People also differ in how they eat them. Some like them stale, frozen or melted to combine with cereal. one Youtuber even makes play dough out of them.

Examples of Peeps/flavors available at different times of the year. 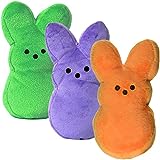 A Look Inside the Peeps Factory

In Conclusion Peeps have become a traditional Easter treat because they appeal to peoples imagination and creativity. You can bake with them, make art with them, collect them and have competitions eating them. In Maryland an annual Peep Off is held on the first Saturday after Easter to see who can eat the most Peeps in 30 minutes! The possibilities are endless!