Pie birds are back!

And so are pies. Pies and pie-making are suddenly back in fashion. You can hardly turn on the TV without some celebrity chef or other showing you how to make the best pies and pastry for the best pie crusts, so what better time to turn your attention to the charming and collectable pie bird?

These pretty little porcelain morsels, also called pie funnels, pie whistles or pie supports, are collectable, cheap, postable and make super gifts for the cook in your life, so read on and find out more about these little pie gems.

What is a pie bird?

A pie bird, or pie funnel is essentially a hollow form with a 'shoulder' to hold up the crust, and a gap at the base and a hole in the top to allow steam to escape. Given that all these elements are present, the pie funnel can be made in any shape or with any material that can stand being baked in an oven and would not contaminate the food.

Typically, they're made in the form of birds, chimneys and rather plain if practical forms such as those in my illustration below. In reality, you can let rip with your imagination!

Why do you need one?

As already mentioned, the pie funnels were designed to support the crust, allow the steam to escape and to prevent the juices escaping.

Some pie birds have large openings at the top, beaks!), so that gravy could be poured into it after cooking.

Another solution to the problem of steam, is the lattice pie crust; plenty of opportunity for the steam to escape.

How do you use it? 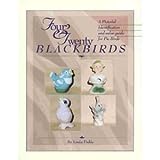 Four & Twenty BLACKBIRDS, Vol. 1: Pie Birds, A pictorial identification and value guide
Learn more about identifying and collecting pie birds in this book by Linda Fields. Another beautiful book is Collecting Stuart Bass Pie Funnels by June Tyler. This book has been give five stars by so many Amazon clients, and no wonder! Stuart Bass pie funnels are miles away from the simple blackbird of my great aunt. These are so charming and this book would make such a wonderful gift, perhaps leading to a lifetime of collecting.
Buy Now

The pie funnel goes by many other names, and is also known as a pie ventilator, pie whistle, pie crust support or crust holder, pie preserver or pie bird.

What I would really like to know is, "Do they really whistle?". The pie birds that I've used didn't but then, perhaps there's not enough 'head of steam'!

The story goes that in the 'olden days', clay whistles in the form of blackbird heads, were baked into the pastry on the top of pies. The idea was that when the pie was cut, the steam would rise up through the whistles and the birds would indeed sing!

A potted history of the pie bird

The pie funnel, was a Victorian invention. The first pie funnels were manufactured by Dean and Morris in 1880. They were often produced in three sizes to accommodate pies of different sizes and depths the funnels were often produced in sets like the Adcock Crust Support, Ventilator and Fountain. These early pie funnels often had wide chimneys for venting the steam from beneath the crust, but also for adding additional stock to the pie during the long, slow cooking process.

One of the all-time favourites and one of the earliest recorded figures was a blackbird, (who hasn't heard of the blackbirds baked in a pie?) The design was registered in 1933 in Australia by Grace Seccombe as a Pie Crust Lifter. Just a few years later, the company J Wilkinson, (of Clarice Cliff fame), registered a blackbird pie funnel design in 1936 and many of these were produced, including plain white wartime versions – some of these bore the stamp of Wilkinson, Newport Pottery or, later, Midwinter.

So what would people have done before pie birds?

Well, you could have used an egg cup to support the crust or a stick of macaroni to vent it.

It's a pity that as food fads and cooking habits have changed, so pie birds have dropped out of fashion; that is for cooking. Pie funnels, however, are enjoying an Indian Summer as far as collectors and collectables go. At one time every home would have had a pie bird or two. Those in the photos above were in my mother's house. I doubt if she'd used them for half a century or so. I certainly remember my great aunts and grandmother having the blackbird pie funnels in their china cabinets, although I can't actually remember seeing them in a pie.

Although some pie funnels have reached high prices in auctions, you'll be able to start a collection for pennies. Check out your local auction, car boot sales and, of course, eBay.

Look out for pie birds by Spode, Royal Worcester, Denby, Shelley and Grimwade, the latter producing the widest variety of designs, (five being patented). Some of the most famous are the ‘elephant pie funnel’ and the ‘Bleriot Pie Divider’ produced in three different sizes, which separated the pie dish into two parts so that two different meats or fruits could be baked in the same pie. Each of these dividers came with their own specific patented pie dish. Grimwade produced the relatively rare ‘The Improved Pie Funnel’ in various sizes.

Pie birds are made in several materials: porcelain, Pyrex glass, aluminium, earthenware, and plastic. The earliest pie funnels were of glass or earthenware, like those pictured here, unadorned, simple funnels. In the nineteenth century tradesmen would mark their funnels with the name of their company. The more work-a-day products were made commercially by larger potteries in the early days, but fancier pie birds were designed later on by the smaller potteries.

In the forefront was Stuart Bass, who has produced over 300 different designs since the mid-1970s. You can see and buy some of his charming little pieces on ebay, see below. These vintage pie birds are such pretty items, they're sure to prove adictive!

Don't ever intend to bake a pie? Don't let that stop you collecting pie birds! They make pretty ornaments and perfect gifts.

I'm going to leave you with this song so that you can just imagine your blackbird pie funnels baked in that pie!

Sing a song of sixpence,

A pocket full of rye.

Four and twenty blackbirds,Baked in a pie.

When the pie was opened,

The birds began to sing;

Wasn't that a dainty dish,

To set before the king?

The king was in his counting house,

Counting out his money;

The queen was in the parlour,

The maid was in the garden,

Hanging out the clothes;

When down came a blackbird

And pecked off her nose.

Send me pictures of your pie birds ...

... and I'll post them here with links. My e-mail is info@lestroischenes.com!

Anything to say about pie birds?