In India snacking is a rather popular activity, especially during a train or bus journey. India is known for its diversity and ethnicity. People in India absolutely love their snacks. On train journeys or bus journeys, people love to have their share of snacks. When entire families are travelling, we come across large tiffin boxes being carried along. On long journeys, families in India love to carry their meals and snacks. Homemade snacks and street snacks are popular with people on train journeys and bus journeys. Majority of Indians love to snack on wholesome portions during a journey.

Do not look surprised as you hear annoyingly familiar sounds on a bus or train journey. Yes, flatulence is a factor you have got to deal with during a train journey or bus journey. Some of the snacks eaten compel the wind out of you, and it may take a while getting used to the rumbling sound of flatulence on journeys.

Packet snacks are hugely popular on train journeys or bus journeys. Trains in India are equipped with a pantry from where you can order delicious food, however you can also buy snacks at various stations the train stops. At train stations individuals come into the train compartments selling snacks and local delicacies. In India snacks are had any time of day. On a travel journey Indians cannot stop snacking, that’s the way of life. 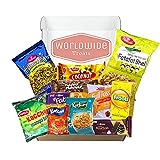 Bhajji is the quintessential snack to have while travelling in train or bus. This medium-spicy street snack is similar to a fritter, but with a twist of herbs and spices. Also, known as pakora in the northern states of India, bhajji is a tasty snack that can be had any time of day. You can opt for different types of bhajji made from onion, potato, spinach, and chili among others. Kanda bhajji made from onion is a very popular and can be found at train stations and tea stalls/tapris on the road.

You find many people travelling in train or bus snacking on peanuts. This crunchy snack is a favorite with travelers in India. Peanut sellers sell peanuts in paper cones. Peanuts are a healthy snack and the safest snack to have while traveling in India. Furthermore, peanuts are the cheapest snack on the road and at train stations across India. If you come across peanuts while travelling, don’t hesitate, go for it.

Among the various packet snacks available on the road and at train stations, potato chips are the most popular. Potato chips are not a very healthy choice; nevertheless this snack is a favorite globally. Banana chips are also very popular in India, so if you haven’t tasted banana chips, you should succumb to its unique salty taste with a sweetish tinge.

Idli Chutni is another favorite travel snack in India. Travel in train or bus in South India, and you will come across idli chutney sellers. This snack is traditionally had as a breakfast dish in South Indian households. Idli is made from a batter of rice, rava, or fermented de-husked black lentils. Idli is had with sambhar and chutney in India. Every train station and restaurant in South India serves idli chutney. The humble idli from South India is absolutely delicious.

Another favorite snack people like to have when travelling in a train or bus is batata vada. This is a potato patty dipped in a chickpea batter and deep fried in oil. Batata vada can be had plain or with chutney or salted-fried chili. When a batata vada is placed inside a pav (bread) it becomes vada pav, another popular snack in India.

Samosa is another street snack hugely popular in India. Individuals travelling love to snack on this delicious snack. The filling in a samosa may differ in accordance with region. In some parts of India finely diced mixed vegetables are used as a filling in samosa. However, in most Indian states, samosa is traditionally made with a spiced potato filling. Samosas are served either with chutney or fried chili. This is a perfect snack to have while travelling in train or bus.

A snack you shouldn’t miss when you are travelling by train or bus in the South is medu vada. This crispy fritter-like snack is made from a batter of lentils. Though medu vada is considered a breakfast dish in South India, you can have medu vada and coconut chutney any time of day. Medu vada is a favorite at train stations in the South and also at restaurants on the highway.

Bhel is one of the most popular chaat street snacks in India. This snack is made with puffed rice mixed with diced tomato, diced green chili, diced green mango, farsan, groundnut, and boiled potato. Many snack sellers at stations have bhel at their stalls. While wet bhel puri made with tamarind chutney is popular at chaat stalls and on bhel carts, in trains it is dry bhel (suka bhel) that is usually sold. The ingredients remain pretty much the same. Except instead of tamarind chutney a little lime is squeezed before mixing the ingredients.

Biscuits definitely have to be among the most popular travel snacks. Be it a train or bus, sellers have a variety of biscuits. There are different types of biscuits you can choose from when travelling by train or bus. Little children prefer cream biscuits and glucose biscuits among others, while adults are often seen snacking on non-sweet biscuits such as Marie biscuits or cream cracker biscuits. Cookies and biscuits are often had as an accompaniment snack with tea or coffee in India.

Dal vada is a popular tea snack in India. This snack is available at train stations in Western parts of India. Dal vada is made from lentils. This snack is served with chutney or fried chili. This deep fried snack is excessively popular with the Guajarati community and the Maharashtrian community in India.