Recently I allowed myself to indulge in some Doritos Tapatio Tortilla Chips, the newest flavor of Doritos released by the Frito-Lay company. This is a happy marriage of Doritos and Tapatio Hot Sauce and I'm hoping this flavorful marriage lasts a long time. In Spanish, "tapatio" means "native of Guadalajara," so the image on the package includes a man who's from that city in Mexico. You may have seen this hot sauce in a grocery store, depending on where you hang your hat. If you're in South Central Texas, count your lucky stars, because it's available here. If you don't have it in your area, there are places to order it online.

The Tapatio Hot Sauce company was founded in California in 1971 by Mr. Jose-Luis Saavedra, Sr. After struggling for the first few years, the company started to take off and it's been going strong ever since. Thankfully, Mr. Saavedra didn't listen to his critics who were trying to discourage him and telling him to get a "real job." He believed in his hot sauce and he made his dreams come true. It's a good thing that he did, or we wouldn't have the pleasure of enjoying Doritos Tapatio.

Doritos Tapatio tortilla chips have 140 calories per serving and the serving size is approximately 11 chips. The 2 1/8 oz. bag that is marketed in convenience stores and on the "impulse item" shelves in other establishments contains about 2 servings. But let's be real--these bags are really what most people consider as one serving. When I buy one that size, it's my bag and if anyone else wants any they'll have to catch me first.

These chips are really good. They have a very nice, smooth "afterburn" that's soothing to my palate. There is no strange chemical aftertaste. The spices are just right--the chips are flavorful from the start, but not overwhelmingly so. They do leave residue on your fingers but it's nowhere near as bad as the residue from Doritos Nacho Cheese chips. They have a nice light crunch, too, unlike a version of Doritos I tried a few weeks ago in which the chips were far too thick.

Everything about these chips is great and I recommend them to anyone who loves tortilla chips and hot sauce, or both. On a scale of 1 to 5, they are a definite 5. A word of caution to the "lightweights," though: If you are sensitive to peppers, even if they are the lowest on the Scoville Scale, then you won't be able to handle Doritos Tapatio. My advice to you would be to build up your tolerance so you can enjoy these chips! 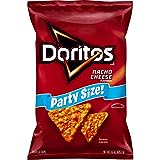