Quinoa for Breakfast - Delicious and a Nutrient Powerhouse

We've all been told that breakfast is the most important meal of the day. Using quinoa for breakfast is a great way to add powerful nutrition to start the day.

Not only is this South American seed a powerhouse of nutrition, high in vitamins, minerals and fiber, but it also has all the essential eight amino acids, making it a complete protein.Unlike grains, it is gluten free, so those with celiac disease or gluten intolerance can enjoy it.

Cultivated in South America for over 3000 years, this nutritious seed (no, it's not really a cereal grain) is still relatively new to most people who are not from its native area. It was a staple food, revered by the Incas for the strength and endurance it gave people who consumed it.

Today, quinoa is grown not only in the Andean countries where it is indigenous, but is now a valued crop in parts of Canada and the US, as well as Europe, Scandinavia and Japan. It does well in the harsher conditions and alkaline soils and because of its hardy nature, can be grown where other cereal grains do not do well.

Quinoa was credited by both the Aztecs and Incas as possessing medicinal qualities. Recent studies on its health benefits show it has cholesterol lowering and anti-cancer properties. It is a complete protein, equivalent to milk protein. It is one of the best sources of dietary fiber. Quinoa seeds are rich sources of potassium, phosphorus, magnesium and iron.

Quinoa is a very rich source of beta carotene, with close to 100 times the quantity of beta carotene than is found in wheat, corn or rice. The vitamin content includes vitamin C, thiamin, riboflavin and folic acid, but ls lower in niacin than most cereal grains.

Where to buy Quinoa

Quinoa is now found in most health food stores and is carried by many grocery stores. Both the white and red varieties are quite easily found, and in some locations you can also buy the black variety. Several sources of quinoa have online ordering, and that may be your best bet for quantity purchasing.

Many quinoa recipes cook the seeds and then use them in various ways. Cooked quinoa can be used in chowders, soups, stews, soups, salads or even desserts. It can also be served as you would rice, an accompaniment to meats, seafood or vegetables.

Quinoa seeds contain saponins, a bitter coating in the hulls that probably evolved to protect the plants from predatory insects and birds. Commercial quinoa has already been prepared for cooking through washing and dehulling. However, before cooking quinoa you should rinse it thoroughly to remove any powdery residue from the processing.

According to "The Art of South American Cooking", here is the best way to prepare quinoa:

Pour the quinoa into a bowl of cold water, and scrub it by rubbing it between your hands. You will find some soapy residue forming from the saponin residues. Drain it and repeat rinsing until the water is clear.

Combine the quinoa with at least double the amount of cold water, bring it to a boil, stirring it occasionally. Lower the heat and simmer for about 10 minutes, just until the seeds are barely cooked and the grains have turned translucent.

Pour the quinoa through a strainer, draining it well. Fluff it with a fork, or spread it out to cool, It's now ready to use an your recipes.

This has become one of the favorite cool morning breakfasts that we enjoy. Hope you do, too. The recipe serves two.

Cook the quinoa in the water (directions above), drain and keep warm.

Combine the coconut milk, maple syrup, and vanilla. Stir into the quinoa, add the fruit, and serve. Top with the toasted nuts.

Alternatives: Use dried cranberries and almonds.

Here's another variation for a quinoa porridge. This is cooked differently, but is equally as tasty.

Combine the coconut milk, water and quinoa in a medium saucepan. Bring to a boil over high heat, and then reduce heat to medium-low. Cover and simmer 15 minutes or until most of the liquid is absorbed. Turn off heat; let stand covered 5 minutes so the remaining liquid is absorbed. Stir in the blueberries and cinnamon (you can also add a little stevia, maple syrup or panela to sweeten).

Transfer into bowls and top with pecans or walnuts. Serves four. 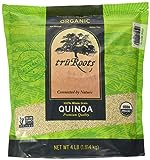 1 teaspoon sugar - panela if you can find it.

Mix all the ingredients together, just until blended. Cook on a hot griddle, and serve with maple syrup, fruit, or as above, with strawberries and whipped cream. Yum!

Combine the flour, bran, salt and sugar in a bowl. In a second bowl, mix the eggs, oil, milk and orange juice and zest. Stir liquids into the dry ingredients, just blending. Overmixing will give tough pancakes. Cook on a hot griddle, turning with air bubbles show and the bottom is golden.

Serve with butter and syrup or hot blueberries.

More About Quinoa on HubPages