Origins of this Welsh Recipe

I live in an area of Britain called Wales. Like other parts of the UK such as Ireland and Scotland, Wales is a Celtic Nation. It has it's own language - Cymraeg. This language along with Cornish and Breton (which are very similar) are all descended from the language spoken by the indigenous British people long before we were invaded by the Saxons and Romans.

Most nations have their own version of Stew or Broth. It seems to have been a staple of diet for as long back as you care to go, and Wales is no different. The Welsh word for Broth is "Cawl" (pronounced like "Cow" with an L on the end).

Cawl was the dish most likely to be served down on the farm during the winter months in Wales. This Welsh recipe became more or less the standard Cawl recipe as used across much of Wales in the early 20th Century.

This Welsh Recipe for Cawl is deceptively simple to make and yet really delicious, Cawl was described by Cattwg Ddoeththus (Cattwg the Wise - Saint Cadoc of Llancarvan in 570 AD) in this way "Cystal yfed o’r cawl a bwyta’r cig” - "it is as good to drink the broth as to eat the meat".

You can't rush a good thing.

The traditional Welsh recipe considered that the best Cawl should be made the day before they are eaten. They were allowed to go cold overnight, and the fat would then be skimmed of and the flavours allowed to intermingle. The Cawl would then be reheated before use. The method we will use is taken from this original Welsh Recipe. Cawl, by the way, is not artificially thickened like soup, but remains relatively unthickened.

Enough History - How do we make it

Ok - Here's the Welsh Recipe for Cawl Cymraeg. This should be enough to feed six people and should be served with chunks of fresh Buttered Bread:

Trim the meat of it's fat as much as you can and then chop or dice it into nice large chunks. Place the meat in a saucepan and cover with cold water. Add the salt and pepper, bring to the boil and then simmer for about an hour. Allow the pan to go cold and then skim off the excess fat that will now be on the surface.

Add all of the other vegetables (except for the Potatoes, one leek and half the Parsley) in a pan. Cover with water and slowly simmer on a low heat for 2 hours, adding more water as necessary. Add the rest of the potatoes and continue cooking for a further 40 minutes, then allow the whole thing to cool and store in the fridge overnight.

The next day, you can re-heat the Cawl on a gentle simmer for about 30 minutes. Whilst the Cawl is re-heating, add the rest of the parsley and season to taste. About five minutes before serving, Chop the remaining leek finely and sprinkle on the top.

This is just one of a number of Welsh Recipes I have on Hubpages. You can find links to some more Welsh recipes below.

My Other Food Related Hubs 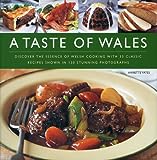 A Taste of Wales: Discover the Essence of Welsh Cooking with Over 30 Classic Recipes Shown in 130 Stunning Colour Photographs
This beautiful new book provides a tasty sampler of the country's cuisine, with more than 30 authentic recipes ranging from breakfasts, appetizers and light meals to substantial main courses, classic puddings and traditional baking.
Buy Now