what is curdled milk?

The curdled milk will have lumps of milk protein, in greenish water which was once smooth, creamy milk. But curdled milk is not always a bad thing though it is an indication of spoilage. Curdling milk proteins is used as a method in producing more delicious food items like cheese, Yogurt and desserts.

Milk curdles very often in summer due to temperature variations. With the milk price soaring every day we regret to waste the curdled milk which is curdled while boiling. At the same time we are afraid to use it, as it may cause severe illness.

The chemical reaction behind curdling of milk:

Milk is made up of many compounds like fat globules , protein,minerals and sugar. The protein in milk is normally suspended in the colloidal solution which means that the small protein molecules, moves freely and independently. These floating molecules refract light which give milk its whitish color. In the good milk, the protein molecules are in a free state without grouping. But when the PH of the milk goes down they suddenly become attracted to each other resulting in lumps of protein molecules and greenish watery solution. This is exactly what happens when milk curdles. As the PH drops and becomes more acidic the protein casein molecules attract one another and become ‘curdles’ floating in a solution of translucent ‘whey’. The clumping reaction happens more swiftly at warmer temperature than it does at cold temperature.

There are six types of bacteria used for cultures accordingly how they change property of milk.

Milk will curdle as it expires because of cultivating bacteria. As milk ages the bacteria converts its natural sugar lactose, to lactic acid , making it sour and curdle. Milk is pasteurized to eliminate the harmful bacteria, which is natively present in it. Leaving milk at room temperature and leave it to sit without refrigeration allow, suitable conditions for growth of microorganisms resulting in souring and curdling.

Lactobacillus is the major part of the lactic acid bacteria group, named as such because most of the members convert lactose and other sugars to lactic acid.

In both pasteurized and raw milk various microorganisms succeed each other as the chemical environment of the milk changes. The microbes themselves bring about the change. The stages of microbial actions are, Streptococcus, Lactobacillus, yeast, and molds, and finally bacillus.

When resulted lactic acid in the milk, is more, the acidity of the milk rise, resulting in clumping of casein molecules of milk. The high amount of lactic acid, in the milk is the sole reason for characteristic sour smell and spoiling of the milk. 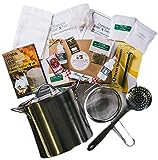 Sandesh is a famous Bengali dish prepared from chhena or paneer. It is easy to prepare and tastes good. Here is my method of preparing dessert Sandesh.

When the lemon juice or vinegar is added to milk it will curdle immediately but adding it to cold milk will not produce a reaction for quite some time. This is the same very reason used to prepare, fresh cheese, like ricotta, and Paneer. Milk is heated at specific temperature and then acid is added, once the milk curdles the solid protein are then strained from the liquid whey and shaped into a round cheese .In this preparation curdling is just harmless and in fact very useful.

1.The milk is curdled with citric acid to get Paneer or Cottage Cheese. The coagulated part is poured in a thin cloth and the liquid is squeezed out. This clumps of protein without liquid is called Paneer or Cheese.

2.The whey is used as a nutritional supplement by the body builders, in countries like Switzerland it is also used in soft drinks. It is used for production of Ricotta, Brown Cheese etc.

3.The curdled milk is used to make yogurt. The milk is curdled with help of bacteria under anaerobic condition, which results in the fermentation. Yogurt is used daily in many parts of the world.

To know about Yogurt and making of yogurt

4.Milk is curdled with the help of rennet which is a natural enzyme. This milk is used to prepare hard cheese like cheddar, or Swiss.

How make cheddar cheese at home

Nutritional value per piece of Sandesh

5.When ingested, commercially prepared milk acts as an intestinal antiseptic by producing beginning lactic acid in the intestine there by preventing the growth of harmful bacteria.

How can you protect milk from spoiling in summer?

“Prevention is better than cure.”The first thing to remember when you buy the milk is to bring it to boil. If it is done all the harmful microorganisms are killed and the milk remains unaffected for a long time.

Pasteurized milk has long shelf life and available in most of the stores, so buying them in summer is a better option.

Store the milk in low temperature or in Fridge which will restrict the growth of micro -organisms .

In summer, boil the milk twice a day to avoid spoiling.

Which have you tried making at home?