It was one of those restless Sundays when we cannot seem to make up our mind where to dine. We eventually decided to go to Plazuela de Iloilo to try one of the many restaurants in the venue. We had our eye on one restaurant but their waiting list was too long so we continued walking around and finally saw Ponsyon by Breakthrough. They have a shorter waiting list so we finally agreed to have our names added. Ten minutes later and we’re guided to our table of six few steps from the door.

How to Get to Ponsyon in Plazuela de Iloilo 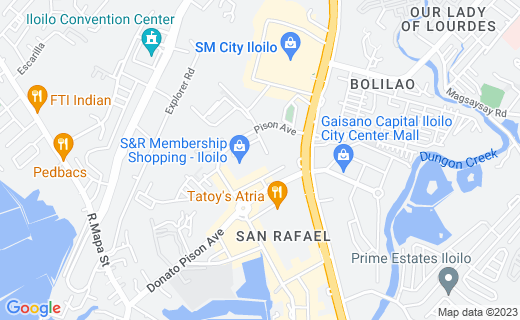 The place was packed when we were guided in by the waiter. We got seated few steps from the door. The interior was bright and appropriately designed with good lighting. Though I felt that the tables were a bit cramped as the location was not very spacious and the management maybe maximizing the space to accommodate more guests. I was forced to be seated closer to the table and most of the time, moving carefully as for my chair not to bump and disturb the person seated behind me.

We were given the menu and started ordering after a few minutes. The waiter performed his duties well but nothing extra ordinary or beyond what’s expected. After an acceptable waiting time of 20-25 minutes, the food started coming out from the kitchen.

We have ordered the following food for six:

The first dish to be served was the Litson Kawali (see main photo above). This is a popular Filipino dish where the pork is first simmered until cooked and tender then deep-friend to crispy perfection. In general, this dish is considered a regular in Filipino gathering and dining experiences so it’s always almost impossible not to like it. Ponsyon’s version of Litson Kawali was nothing out of extra ordinary but it was wonderful nonetheless with just the right amount of crispness to it.

We had two orders of Baked Talaba (oyster). This was a personal favorite. The oysters were baked generously covered by garlic, cheese and olive oil. It was so creamy and wonderfully melts in the mouth that I almost ordered another plate just for myself. Almost. One thing I noticed though which was very obvious on this dish, Ponsyon doesn’t spend much time on the plating. This looked like the oysters were just randomly placed and hastily served without much thought given on how it looked on the plate. Nonetheless, the oysters were delish!

We had a comforting bowl of Sinabawan na Pasayan or shrimp stew with various vegetables. This soup was hot and comforting with the shrimp and vegetables just perfectly cooked. This was well-seasoned and just with the right amount of “sigang” sourness to it.

We ordered Alimusan cooked in Gata; fish cooked in coconut milk. This tasted okay but was a disappointment when it came to the serving. We originally thought with its price, we’ll be getting a whole medium-sized fish but what we got was a plate with just two slices of fish in coconut milk. We were forced to order another one so the six of us could taste and enjoy just a little bit more of the fish meat.

Another dish we enjoyed was Sizzling Crabmeat. This was served very hot on a sizzling plate and was also well-seasoned. If you’re a seafood/crab lover, this is something you wouldn’t want to miss.

The Filipino table staple, Pakbet, was our vegetable dish of choice aside from the shrimp and vegetable stew. This dish was a mix of various vegetables cooked in fish sauce. The vegetables were flawlessly cooked and as a vegetable lover, I enjoyed this very much.

Together with the regular steamed rice, we had a Kalokalo sa Aligue; a bowl of rice fried in crab fat called “aligue”. This one was flavorful and the men in the family got to enjoy more servings. One thing to note, true to its name “crab fat”, this dish contains a lot of fat and should be moderately consumed or even avoided by people with medical conditions that could be affected but its high fat content.

Ponsyon by Breakthrough was one of the more popular restaurants in Iloilo City and I have encountered people being satisfied and even proud to have experienced Ponsyon. But in my personal experience, Ponsyon can still be improved from the taste of the food to the plating and presentation to the overall feel of the place. As for the value for money, including the different-flavored shakes and drinks we ordered, we paid a little over Php2,000. Given the overall experience, I would like to give Ponsyon the score below hoping and expecting that they will address the areas of improvement mentioned for a better customer experience in the future.

Will you visit Ponsyon by Breakthrough anytime soon?