The Scandinavian fascination with liquorice

Liquorice - the 'saltier', the better?

Many Scandinavians (especially Swedes and Finns!) worship liquorice, in particular salty liquorice. You will find the candy in every grocery shop. There's no stopping the tasty sweet and salty flavour, often the saltier the better for some. So why does this fascination exist in this region? Many people I have met from other countries think it is completely vile (most, not all!). Let's try to answer this question but first let's look at where liquorice comes from and any supposed health benefits and risks (yes, sadly there are risks).

The 'roots' of liquorice

In its purest form, liquorice is the root of a plant called 'Glycyrrhiza glabra' - not a very nice name for something so wonderful! The plant is native to Southern Europe and parts of Asia. Liquorice contains a component that is 20-40 times sweeter than sugar (!) - no wonder it tastes so good..

Liquorice extract, for use in candy and other products, is produced by boiling liquorice root and evaporating most of the water. Not all liquorice sold as candy will contain 'real' liquorice - check the label to be sure!

Salty liquorice - The liquorice candy that tastes salty actually doesn't contain any salt but its' flavour is dervied from ammounium chloride. This doesn't have a good ring to it so the Finns have named salty liquorice 'salmiakki' ('salmiak' or saltlakrits in Swedish). Many Scandinavians are very particular about their liquorice - those who love salty liquorice might not go near sweet liquorice (and vice versa). It is hard to describe the appeal of salty liquorice for someone who has not tried it - I would say that the flavour is intensely sweet but with a salty 'surprise' at the end. There are varying levels of salty liquorice, so if you have never tried it before, I would stick to the milder liquorice options mentioned further below.

Health - the good and bad

Benefits - The benefts of liquorice candy usually depends on the type of candy consumed - What you're looking for is products containing liquorice extract or liquorice root. You won't get the same medicinal properties from aniseed oil, which is used to flavour many liquorice products. Even if the candy does contain extract, the quantity is usually far too small to have any sort of health benefit - to make the most out of the benefits you would need to purchase liquorice from a health store. Medicinal forms of liquorice include wafers, tinctures, tablets, lozenges, teas, loose dried herbs, creams and capsules.

Ailments that liquorice can help to treat include:

Hepatitis The anti-inflammatory properties of liquorice is said to help calm hepatitis-associated liver inflammation.
Dyspepsia (Heartburn) According to the US National Library of Medicine, liquorice may effectively treat heartburn when used in combination with other herbs.
Eczema In one study, liquorice gel, applied to the skin, helped relieve symptoms of itching, swelling, and redness, reports the University of Maryland Medical Centre.
(Source - The Sydney Morning Herald)

Risks -The main risk concerning liquorice is its effect on blood pressure. The culprit is the compound 'glycyrrhizin' which is the sweetener in liquorice. Glycyrrhizin can cause potassium levels in the body to fall, causing some people to experience an abnormal heartbeat, as well as high blood pressure, swelling from fluid retention and muscle weakness. In other words - do not over-indulge!

So why all the love from the nordic countries?

Is the taste for liquorice something that we are born with (or without)? According to Annica Tryberg, author of the book 'Lakrits' ('Liquorice), the taste for this dark candy coincides with the Scandinavian palette of salty and sweet - much of the cuisine such as pickled herring or gravadlax are typically salty and the taste might connect people with comforting, familiar and homely flavours. In addition, the historical background of curing meat and fish with salt during the long winter months may also be a factor that has influenced the Scandinavians taste buds. Perhaps the Scandinavians need a 'booster' to compensate for the darkness in the winter?

The popularity of liquorice products knows no bounds - "Scandies" enjoy adding liquorice flavour to a range of products such as ice cream, chocolate, cakes, cookies, cupcakes, drinks, - you name it!

Perhaps it is not suprising that there is an annual "food festival" dedicated to liquorice - well, the Liquorice Festival or 'Lakritsfestivalen' is best described as 'a meeting point for liquorice lovers and a party full of taste experiences' and of course there are countless tasting sessions. The festival aims to 'to gather ”the liquorice world” [in one place], including consumers, suppliers, manufacturers, lecturers, creators etc. in order to inform, try, taste and show the variety of new liquorice products that we find in the market'. The festival is held in Gothenburg (Sweden) and attracts over 7000 liquorice fans every year (I would love to go!). 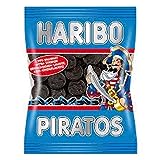 I have listed the below liquorice candy favourites on a scale from very sweet to extremely salty:

Salty cars by Ahlgrens (getting there..)

Jungle scream by Malaco (try and eat these without pulling a face!)

All this talk of liquorice is making me hungry! Please take part in the poll below - I would love to find out how many of you enjoy or dislike liquorice!