All four of these non-pie main dishes are basically the same. I say non-pie, as they do not have a crust like you would normally think a pie would have. In fact there really is no crust. This has always confused me but so be it.

Cottage Pie is also called British or Irish meat pie that dates back to 1791, which is when the potato was first known to be edible as well as affordable. The meaning of “Cottage” according to the Webster’s dictionary is the dwelling of a farm laborer or small farmer. Originally cottage pie would be made with any type of left over meat on the bottom, slices of potatoes on top layered, and when it came out of the oven it resembled a cottage roof tile. Today however, mashed potatoes are usually used as a topping.

Why shepherd? This was named in the 1870’s suggested that the shepherd would make this dish with mutton or lamb and mashed potatoes. The shepherd part of this makes total sense to me.

This pie gets its name from the United States and has ground beef for the meat, corn in the middle and mashed potatoes on top. You will also find many times this will have cream of mushroom soup in it.

Learn something new every day. Had to look up the definition of pie and this is what wikipedia stated

A pie is a baked dish, which is usually made of a pastry dough casing that covers or completely contains a filling of various sweet or savory ingredients. Pies can be either "filled", where a dish is covered by pastry and the filling is placed on top of that, "top-crust," where the filling is placed in a dish and covered with a pastry/potato mash top before baking, or "two-crust," with the filling completely enclosed in the pastry shell. Pies can be a variety of sizes, ranging from bite-size to ones designed for multiple servings.

I have been eating Shepherd’s pie my entire life. Personally I do not like it. My husband and my sons do, so being the nice mother that I am I will occasionally make it for them. I do not think I have ever made it the same way twice though as I keep trying to find a way to make it so that I too can enjoy it. Last night “BINGO” I liked it, even had seconds. Decided that I would write a HubPage on this great event and share the recipe. 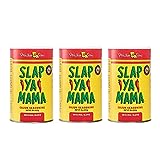 Slap Ya Mama All Natural Cajun Seasoning from Louisiana, Original Blend, MSG-Free and Kosher, 8 Ounce Can, Pack of 3
Buy Now

Does this recipe sound good? Please rate it.

5 stars from 3 ratings of Shepherd's Pie