Turkey – Traditional Main Course of Feasts for Christmas and Thanksgiving

Whole turkey can be cooked in different ways: roasted (with or without stuffings inside), baked, grilled, smoked, and deep-fried. Turkey meat is also processed as hams and sausages.

Before the 20th century, turkeys are mainly served and eaten during special occasions. Since turkeys are always available in supermarkets today, its meat has become regular part of menus all year-round.

Sold as sliced, ground, and whole, turkeys are generally preferred bought as fresh by most consumers. Mainly because frozen turkeys, particularly whole and large-sized, often take several days to defrost.

Whole turkey often requires several hours to cook. Brining is often done to avoid drying the breast meat while cooking; and also to enhance flavor. Dark meat needs higher temperature to denature all myoglobin pigment; thus turkey is brined before roasting. However, deep-frying whole turkey can be done within 30 to 45 minutes.

Baking and roasting are both dry cooking techniques, which use dry heat to cook. Ovens often provide 2 heating elements: baking and broiling or grilling. Roasting causes caramelization or browning on the surface of turkey skin, which enhances the flavor.

Roasting turkey is best done in low temperature ovens, with temperature between 95 to 160 degrees Celsius (200 to 325 degrees Fahrenheit). Slow roasting prevents excessive loss of moisture content. Meat is tender and still moist at the same time.

How to Deep Fry Turkey

Deep frying is considered as a dry cooking method due to absence of water. Through high temperature and high heat conduction of oil, whole turkey meat can be cooked very quickly. The ideal temperature for frying is between 175 and 190 degrees Celsius (345 to 375 degrees Fahrenheit).

Since whole turkey has skin-on, which serves natural coating, breading or battering is not needed get desired crispiness and golden brown color.

To avoid making the fried turkey excessively greasy or oily, make sure that the oil is hot enough and turkey is not immersed in oil for too long. Over-cooking can cause moisture content of meat to evaporate and oil to penetrate the turkey.

Do not overheat and over-use frying oil because rancid taste and toxic compounds (such as acrylamide) can be formed. Cooking oil is highly-flammable. Do not splash water to flaming oil. Extinguish oil fire by placing cover or lid over the fire. 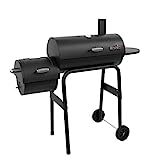 Grilling involves dry heat from above (also called broiling) or below (as in pit-smoking). Broiling cooks meat from heat coming from above. In gas ovens, a separate compartment for broiling is placed below the bottom flame.

Smoking exposes meat to heat and smoke coming from burning or smoldering charcoal and wood. It is a cooking process that the gives distinctive smoky flavor and, at the same time, preserves food. Common smoking woods are: alder, oak, hickory, mesquite, pecan, maple, oak, apply, cherry, and plum

Brining is similar to marinating. Turkey is soaked in salt-and-water solution (also called brine) before cooking: roasting, frying, grilling, smoking, and etcetera. Brining keeps the moisture inside the meat while cooking through hydrating the cells of the muscle tissues before cooking.

Note: Large amount of salt is easier to dissolve in hot water; but refrigerate the solution before using. The raw turkey will remain in the brine for several hours so the meat temperature must be maintained at refrigerator temperatures. Use plastic containers or stainless steel pots for brining turkey. After brining, rinse off the turkey and place inside the refrigerator to wait for cooking time.

How to Brine a Turkey 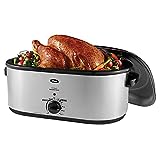 'Turkey Frills' (or 'booties') are frills made from colorful paper placed on the end of turkey drumsticks as decorations.

How to Make Turkey Stuffing

Stuffing is not recommended for whole turkeys that will be grilled, smoked, fried, and microwaved - for safety reasons. However, stuffed turkey legs and turkey breasts are safe to cook over open fires such as on grill or smoker. 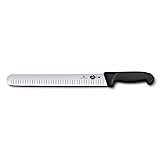 How to Make Turkey Gravy