You can, of course, do some basic solar cooking with very few accessories. In fact, a Mason jar, turkey bag, and windshield reflector are all you need to heat soup or cook beans. When if comes to "simple," solar cooking is one step up from roasting a hot dog over a fire. Once you start cooking with the sun, however, you will find yourself trying more complex recipes. You've just cooked chili, and you find yourself wondering if you could make cornbread. You've just done a chicken, and you find yourself wondering about a turkey. For the more complicated projects, a few accessories can be helpful. 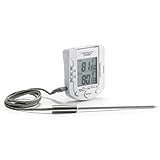 The most useful accessory—some may even call it an essential—is a thermometer. Especially if your oven is homemade or underpowered, it's essential to know whether you've brought the temperature inside it out of the "danger zone." The danger zone for food is 40 degrees to 140 degrees Fahrenheit. For food safety, you need to make sure the inside of your oven stays above 140 degrees and the food you're cooking gets hotter than 165 degrees. If your oven temperature is only around 160 degrees and you're cooking something that heats slowly—something large or with a lot of liquid, for example—your food could easily breed contaminants.

One way of making sure your food is safe is to pair an oven thermometer with an instant read thermometer. The oven thermometer stays in the oven. You use the instant-read thermometer by opening the lid and pushing the thermometer into the thickest part of the food. The problem with this method is that you have to open your oven to take the readings. Solar ovens lose heat rapidly and take some time to regain the heat lost.

A better method is to use a thermometer with a dual probe. One part of the probe measures the temperature of the oven while the other part remains in the food and measure its temperature. The cord from the thermometer probe runs to a digital display outside your oven. Without opening the oven, you can tell both oven and food temperature. I use the Polder Dual Sensor Thermometer and find it works very well for the purpose. Component Design NW also has a version. 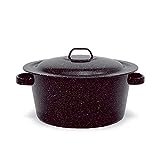 You can use any pot you use on top of the stove or in a conventional oven for solar cooking.  Some, however, work better than others.  The last thing you want in a solar oven pot is one that takes forever to heat up.  Theoretically, that means you want a pot made from a material with good thermal conductivity.  Aluminum and copper have good conductivity.  Steel, glass, clay, and silicon conduct less well.  Other factors, however, come in to play as well.  A thin pot heats up better than a heavy one.  Cast iron, for example, holds heat well, but takes literally hours to get up to cooking temperature, even without any food in it.  A dark-colored pot absorbs light and emits infrared (heat) better than a light-colored pot.  A clear lid can make the pot function almost like a solar oven within a solar oven, so it works somewhat better than an opaque lid.  Theoretically, a very lightweight, black, copper pot with a clear lid would be ideal.  Unfortunately, nobody I know of makes such a pot.

The best option I've found is low-carbon steel enamelware or graniteware.  The steel may not be the best material in terms of conductivity, but since the sides of these pans are typically quite thin, that low conductivity isn't much of a problem.  The black absorbs heat easily.  The heat is transferred efficiently to the food, and the lid keeps the heat in the pot with the food.  The other nice thing about these pans is that if I want to start the food on the stove and finish it in the solar oven, I can do that with enamelware pans.  I can't with, for example, a black ceramic casserole dish.

My solar oven has latches I can't open while wearing heavy oven mitts.  An Ove Glove allows me to open the oven, take out one pot, and close up the oven to continue cooking a second pot without putting on and taking off oven mitts.  They're a luxury, not a necessity for solar cooking, but I like them.

If you are just starting out and have no idea how to cook in your solar oven, a cookbook can be a big help.  Solar Cooking by Harriet Kofalk and Warren Jefferson has instructions for making a simple cardboard solar cooker as well as recipes and cooking hints.  What makes this book unique is the section of solar canning and drying.  Cooking with Sunshine: The Complete Guide to Solar Cuisine with 150 Easy Sun-Cooked Recipes by Lorraine Anderson and Rick Palkovic is a beginners' guide.  It has instruction for a simple cardboard box cooker as well as recipes. Solar Cooking for Home and Camp by Linda Yaffe has an introduction to solar cooking and recipes.  The Sunny Side of Cooking by Lisa Rayner has 100+ vegan recipes as well as an introduction several other methods of cooking without electricity of gas.