Natalie, a Ph.D. in Clinical Psychology, is a freelance writer who is always searching for what lies within the potential.

I have been keeping kosher so have been making kosher meals for years. Then I was told I needed to stop eaten gluten. Enter the Kosher, Gluten free recipes. Now I have friends who keep Kosher, are gluten intolerant and lactose intolerant. Cue the kosher, gluten free, lactose free recipes. One of these friends was desperate for a dessert she loved from her childhood especially on wintry night; Monkey Bread. I promised to work on it. I remember getting monkey bread at the amusement park when I was a kid and the warm gooey treat was always one I looked forward to for days before. Several recipes late afer trying batches that either lacked the syrupy, caramel gooiness, being too dry and hard or was overly gooey to the point the dough didn’t hold together and wouldn’t fully bake.

I believe I have found a happy medium. Below you will find the result of my efforts, taste tested by my friend, my friends husband, their three kids and yours truly. All thumbs up. As this is a favorite breakfast item for special days or weekends when everyone likes to sleep in, the dough can also easily be made the night before and baked the following morning. If you prefer you monkey bread less sweet, leave off the glaze and serve warm from the oven. Give this recipe a try and let me know what you think in the comments. Enjoy! 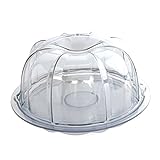 Nordic Ware Cake Keeper, Deluxe Bundt, Clear
"Have you ever baked a beautiful cake to take to a party or potluck, and momentarily panicked as you realized how difficult it would be to transport it without ruining the cake? Avid bakers find themselves in this predicament frequently, and can attest to the fact that having a safe transportation container is key! The Bundt Cake Keeper is the perfect solution to this age-old problem. Place your freshly-baked Bundt cake inside, set the cover on top, and twist to lock the cake safely inside. You're now ready for transportation to and from a party. Best of all, the Cake Keeper will keep your cakes fresh and looks great sitting on your countertop. Made of clear acrylic, the Cake Keeper is very durable and can be put through your dishwasher for simple cleanup. Proudly made in the USA by Nordicware."
Buy Now

A Word About Choosing a Dairy Free Milk for Baking

When baking with non-dairy milk it is important to know that different milks lead to different outcomes. Of all the non-dairy options available, soy milk is generally the best choice as it has the most protein and is the closest to cow’s milk. Yet it also has more antioxidants than cow’s milk – by about 75 percent.

Soy milk provides a taste that is rich, creamy, nutty and just a touch sweet, flavors you can still detect even when it's used for baking. Soy milk is one of the best milks to choose for cooking. It can be used to replace cow’s milk in the same quantities in any recipes and it remains stable at high temperatures.

In baking, soy milk is also one of the best choices because of its high protein content. When you curdle milk with an acid such as vinegar as is done in this recipe, complex flavors are created. The mixture will thicken slightly making it even richer in flavor, a bonus for using it in breads and other heavier baking options. Thickening will also increase the leavening power of the dough, a nice side-effect when baking with gluten free flour. Since curdling is dependent on protein content, soy milk is the best choice when you need to curdle the milk for baking. That means that soy milk is also the best choice when making anything with buttermilk in the ingredients.

When buying soy milk, if possible, choose organic or non-GMO brands to avoid genetically modified soybeans. It’s best if you can find a variety that does not contain carrageenan as an ingredient. Even though this additive is on the U.S. GRAS (generally recognized as safe) list, research has shown that this red seaweed extract can lead to gastrointestinal inflammation.

For those who are gluten intolerant, often there is an increased susceptibility to additives that cause health problems. A number of doctors have reported gluten-intolerant patients who present with gastrointestinal symptoms that can be linked to carrageenan. This usually only occurs however, when ingesting the additive in higher quantities than what would be consumed when eating a portion of this Monkey Bread. So while no problems should result from the amount of carrageenan found in this recipe I always feel it’s best to err on the side of caution whenever possible.

Almond milk is probably the most popular non-dairy milk even over soy milk. Almond milk can be used as a cow’s milk substitute in the same amounts in almost all recipes. It has a slightly nutty, creamy taste with a little sweetness. Almond milk is high in vitamins and other nutrients but it does not contain much protein. It also is not high in calcium and vitamin D unless fortified.

One cup of almond milk generally provides 1 gram of protein compared to 8 or more grams found in 1 cup of soy milk. This makes almond milk less likely to curdle without increased amounts of vinegar or lemon juice. The general rule is to use twice the vinegar or lemon juice to curdle almond milk than what is used in soy milk. So for this recipe use 1 tablespoon for the half-cup milk that is called for. Almond milk also often includes carrageenan so if possible choose a brand does not include this an ingredient.

Coconut milk is another good non-dairy substitute for milk and it’s slightly sweet, creamy taste provides a richness to the taste of baked recipes. Although it is high in calories, it is filled with nutrients. Coconut milk also contains a beneficial fat called lauric acid which the body can easily absorb and use for energy.

Although some are concerned when learning that coconuts’ fatty acids are primarily saturated fats, these fats actually don’t raise your cholesterol levels or cause heart damage. Instead, they’ve been shown to do the opposite. The fats in coconut milk can help lower cholesterol, improve blood pressure, and prevent heart attacks and strokes.

Like almond milk, coconut milk provides little protein, about 1 to 1 ½ grams per cup, so use one tablespoon of vinegar or lemon juice to curdle the ½ cup of milk used in the recipe. Make sure to use full fat coconut milk. Anything less will be too watery to produce dough with the proper consistency.

Rice milk, in my opinion, is not the greatest choice for baking as it is much thinner than other milk substitutes and has very little protein, at less than 1 gram per cup. This means that even when doubling the amount of vinegar or lemon juice used to curdle it you will be left with a thinner result than is desired. It also has little nutritional value unless fortified and even then you will only likely see an increase in calcium and vitamin D.

While rice milk has more carbohydrates than dairy milk, it has no cholesterol. This milk has a good flavor, being a bit sweeter than other types of non-dairy milk and blends in well with the other flavors in a baked recipe. Even though rice milk is made with rice starch as it is such a thin product it frequently has carrageenan. Other thickening agents may be included instead. Look for a product without carrageenan.

Hemp milk is among the newest non-dairy milks now available. It is moderately creamy and is rich in the plant-based omega-3 fatty acid ALA. Instead of sweetness it has a bit of a malt flavor to it. I find that it has a slightly bitter aftertaste and when baking with it this becomes apparent as does a gritty texture.

I would recommend not using Hemp as a substitute for milk in this recipe unless you have baked with hemp in the past and enjoy the unusual properties it provides. It has 2 grams of protein and can be curdled with 1 tablespoon of vinegar or lemon juice. If you choose to use this try to find a product without carrageenan.