Shaved ice, sno cones, ice cream: these warm-weather treats are popular worldwide. But although the essentials of ice cream or shaved ice may be the same, American flavors such as cherry, lemon-lime, and strawberry aren't the only toppings available. Many places top their desserts with things that might seem a little unusual. Even in the U.S., novelty-seekers and making up new flavoring pairings.

The American palate isn’t a global taste-maker, and these variants of ice cream and shaved ice are cherished worldwide. Some of them are even spreading beyond their home countries and into the world at large. Just don’t be surprised if you can't find them at your local roadside stand. Not everyone's ready for some of these toppings.

Corn is a popular topping for ice cream in Asia. You can buy creamy popsicles at the Asian market studded with bits of sweet corn. When you eat them, the corn kernels pop in your mouth and release a sweet, slightly salty flavor.

A popular treat in the Philippines is mais con yelo or maíz con hielo. Translated from Spanish, it means “corn with ice.” This frozen dessert is topped with sweet corn and evaporated milk. When mixed together, the ice turns creamy. As with the Korean ice cream, the corn kernels are juicy and salty-sweet. For some, it can be an acquired taste, but for others, it’s an unmissable treat to beat the scorching summer.

There is something decadent about drizzling liqueur over ice cream. It's two indulgences in one. One liqueur that's pairs well with vanilla ice cream is Chambord, a sweet berry liqueur. Chambord even suggests using their product as a topping on their site.

The sign of a good balsamic vinegar is its sweetness. If it's a high enough quality brand, the vinegar will only have a mild vinegar taste. Instead, there will be a full-bodied, mildly sweet flavor. Some swear by pouring balsamic vinegar on ice cream, especially in Italy. 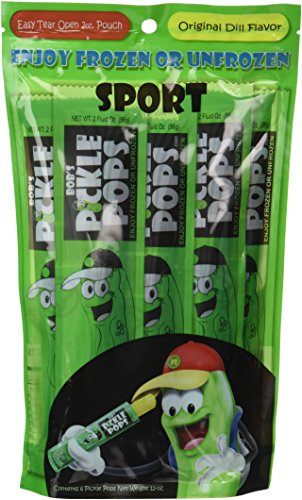 What's the dill with pickle flavoring?

Pickle ice is popular in the Southern U.S. and in Mexico. Generally served in glass jars, the pickles float in a greenish vinegar solution known as “pickle juice.” When all of the pickles are eaten, many people discard the juice. But others still have unusual ways of reusing the sour, tart brine.

Pickle flavorings aren’t uncommon in snacks. There are pickle-flavored chips and sunflower seeds available in U.S. gas stations and convenience stops. So why not let pickle flavoring enter the realm of desserts?

Shaved ice, specifically Hawaiian-style shave ice, is an import from Imperial Japan, where people would gather snow from mountain peaks to cool off from the heat of summer. Due to these influences, adzuki beans, or sweetened red beans, are found on shaved ice in both Hawaii and in Japan.

Adzuki beans are common ingredient in Japanese desserts. Both starchy and sweet, they add a unique texture and mild flavor to whatever they’re paired with. Red bean buns, known as anpan, are a common treat in Japan. Taiyaki, a fish-shaped cake, is also filled with red bean paste.

The Gilroy Garlic Festival is known for its rampant love of garlicky foods. They've been known to make a garlic ice cream in the past. But what's the best topping for garlic ice cream? Pressed, salted garlic, of course.

Rice cake is popular in Asia, especially in Korea and Japan. Patbingsu, the Korean version of shaved ice, has both red beans and rice cake as a topping. It acts a chewy texture to the ice, and glutinous rice, the base for rice cake, is naturally sweet.

Mochi, tiny Japanese rice cakes filled with a variety of flavors, can also be filled with ice cream. This combination is chewy, cold, sweet, and refreshing. It can be found at many Japanese restaurants in the U.S., and some Asian markets even offer packs of ice cream mochi in the frozen section.

Salt and sweet are a perfect pairing. Many people like to salt their watermelon before eating it, letting the salt crystals cut through any overwhelming sweetness. The result is a mild, full-bodied flavor that's amplified by the salt.

In India, a particular flavor of ice known as kola khatta uses fruit and black salt. The salt helps to replenish electrolytes lost in the Indian summer, but it also marries with the tartness of the fruit. Pepper is occasionally added to the mix.

Sea salt and caramel--not to mention sea salt and dark chocolate--are becoming popular flavors of ice cream, even showing up at frozen yogurt joints. Some foodies like to top their chocolate ice cream with a layer of caramel and coarsely ground sea salt.

It's not quite ice cream, but it's close. The Inuit of Alaska create akutaq, so-called Eskimo ice cream. This dessert is a whipped mixture of fish, snow, berries, and animal fat. The fish isn’t a necessary ingredient--many modern native Alaskans omit the fish and substitute Crisco for the animal fats--but the traditional recipe calls for fresh, boned fish.