My Love For Sushi

Play With Your Food! 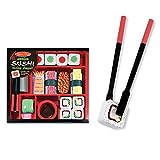 Often served with sashimi or sushi, the hot green paste Wasabi is made from the root of the Japanese horseradish.

Accompanied with soy sauce, or sometimes mixed to form a dipping sauce known as Wasabi-joyu.

To most people the mere mention of sushi means "RAW FISH!" but this couldn't be further from the truth.

If you want raw fish, the whole raw fish and nothing but the raw fish so help you God then you need to order 'sashimi'. Which, by the way, I'll eat by the bucketful. Or even Sashimi Beef. Yes, nothing but sliced raw cow. I don't know what it is about it, I just love it.

But getting back to Sushi, if you haven't tried it, because raw fish isn't your thing, then maybe you should. Because it isn't really about raw fish at all.

Try a nori roll, which is specially prepared rice (it's a short grain rice, with rice vinegar, and it's sticky so it stays together and holds firmly within) wrapped in seaweed, with a choice of different fillings inside. And don't let the seaweed put you off, it's surprisingly delicious. Just pretend it's cabbage, if that works for you. Though for me I'm not too fond of the thought of cabbage.

The filling can be anything from... well raw fish (salmon or tuna) to smoked fish to cooked fish (personally I don't like tinned tuna, so I give that one a miss).

Or you can have chicken or beef. Cooked mind you.

Squid? That's a personal favourite of mine.

Maybe smoked eel? I know it sounds disgusting but my son has liked that one since before he became a teenager.

Maybe you could go vegetarian.

No matter the combination it's a healthy alternative to fast food. And delicious. In fact I think it's fastest freshest food available. It's all prepared before hand and keeps well in the refrigerated display units. Even if there is a queue it doesn't take long to get served quickly.

Some people like a bit of soy sauce on it, but I prefer it without, only using a bit of wasabi. And not too much wasabi! It's extremely hot but I find the flavour really enhances my sushi experience.

If you've never tried it before, give it a go. Even if you just have one or two as an entree before your next takeaway feast. Who knows, it may soon become your first choice for a main course. 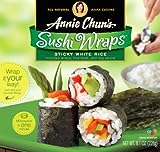