What is Laffy Taffy?

Laffy Taffy is a taffy candy that comes in a variety of flavors. Laffy Taffy is famous for their individually wrapped pieces of candy accompanied by a silly joke.

Laffy Taffy was first introduced in 1970. They are manufactured by Nestle and sold by their branch Willy Wonka Candy Company. The original name of Laffy Taffy was "Beich's <insert flavor here> Caramels".

The name, Laffy Taffy not only refers to the texture of the candy, but it also refers to the embodiment of silliness. On every wrapper, there are jokes that were sent in by kids.

Laffy Taffy used to be manufactured in a thick square shape but now, they are sold in thin rectangular pieces. Also, in 2007, cords of Laffy Taffy were introduced. Eating one of the cords is the equivalent to eating a handful of the Laffy Taffy pieces.

Laffy Taffy has corn syrup and/or sugar in it along with hydrogenated coconut oil and/or palm oil.

Less than 2% of each in each piece - Maltic acid, monoglycerides & diglycerides, Hydrogenated cottonseed oil, salt, soy lecithin, and artificial flavors.

Maltic acid - A food additive that contributes to the sour taste in fruit.

Monoglycerides and Diglycerides - Fats in food. Usually small in content.

For the month of May 2018, Laffy Taffy is having a joke contest with the winner receiving $10,000 and the title of "Chief Laugh Officer". According to Thrillist, the winner will have a chance to write jokes that will be put on the candy. Entrants must submit a 60-90 second clip to the Laffy Taffy website of you performing comedy and three Laffy Taffy jokes. The finalists will be flown to LA where the winner will be announced.

Laffy Taffy: Love them or hate them? 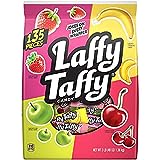