The 5 Most Expensive Whiskies on the Planet

A minority of people demand the absolute best and have the money to back it up. They are chauffeured in Bentleys, own private jets, and spend summer days in yachts big enough to land helicopters on top of.

Have you ever wondered why a hired-hand does all the driving?

You may have noticed that any luxury mode of transport tends to have a built-in bar. There’s a bar (or several) in any one of the multiple homes they own as well, and you can be sure any one is stocked with a few choice items that common folk can’t afford to look at.

While the masses huddle up to the boob tube and watch the game while sipping on a garden-variety glass of Glenfiddich 12 year old, you can be sure Daddy Warbucks and his gated community buddies opt to drink a much older, exclusive whisky.

If top-end whisky is the norm, what does a gloriously rich man drink on special occasions to reward himself? The obvious answer is The Macallan Fine & Rare Collection, 1926, 60 year old. That is if he can find it.

The world’s most expensive whisky, originally selling for $38,000 and currently valued at $75k is now sold out. It is available by the glass for an outlandish $3,300 at the Old Homestead Steakhouse in Atlantic City, New Jersey.

Also of honourable mention is Dalmore’s supreme offering, not only because of its estimated value but also because of the unique way it was made. Only 12 were produced. Each bottle is a combination of four single malts from a differing vintage: 1868, 1876, 1926, and 1939.

Dalmore 62 Single Highland Malt Scotch has only touched the tongue of six people in the world. After winning an auction at the Pennyhill Park Hotel in Surrey for $58,000, the owner shared it with five of his friends.

Long associated with crème ala crème whisky, Johnnie Walker bottled a tribute version of Blue label fit for the founder himself. The Blue 1805 is blended with a variety of whiskeys that are at least 45 years old, many of which came from distilleries that aren’t around today.

The bottle is packaged in a Victorian-era style case along with a vintage pen similar to the one Walker used and a replica of Alexander Walker’s (grandson of John) prized recipe book. For your own copy of the time capsule, you will need a mere $27,000.

The very best whisky from Glenfiddich was born from a single cask that amounted to 61 bottles. The spirit aged for 64 years before being released in 2001. U.S. law required that the whisky could only be imported in a 750ml bottle, and only of this type was ever produced.

The ultra rare version was auctioned in April 2006 at Vanderbilt Hall within Grand Central Terminal at a reported hammer price of $20k.

Any of the choices above get you extraordinarily old and fine-tasting whisky, however it is a little odd that its delivered in glass bottle similar to what you would get with bargain basement scotch. An exceptional whisky deserves to be in a suitable decanter and this offering from The Macallan saves you the step of finding your own.

Wordwide, 420 decanters were released with only one hundred in the U.S. priced at $14,000. The natural colour decanter made by LALIQUE contains 55 year old single malt Scottish whisky. Consider it an upgraded version of the 50 year old LALIQUE decanter that made a big splash in 2005. 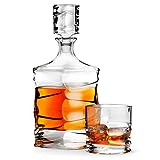 In the eyes of the ulra-rich, collector quality whisky is seen as an affordable luxury. The Macallan Fine & Rare Collection, 1939, 40 Years Old at $10,125 is still far more affordable thrill than racing along the coastline in a new Bugatti.

The release of whiskies like this are the mark of a thriving economy and a future in which luxury goods climb further into a realm of characterized extremes. A bottle of Johnny Walker Blue Label which was once the most prestigious whisky around 20 years ago now seems modest in comparison.

One wonders if the greatest part aspect of this phenomenon is to taste of the world’s best whisky or to tell others you had the opportunity to try it.