The Evolution of the Eating Utensil

Rebecca Graf is a seasoned writer with nearly a decade of experience and degrees in accounting, history, and creative writing.

Ever wonder how the eating utensils you dine with came about?  I mean, the cavemen surely did not have the same tools to eat with that we do now.  How did they come about to look the way we have them today?  Like anything else, our cutlery has a history.  But with that history is the reflection of the history of the world in which it all developed.

One of the oldest utensils ever used by man is the spoon. You thought that it would have been the knife right? Well, the spoon actually was the first as cavemen and their descendants would use various shaped shells to scoop out their food and eat. The hands worked for roasted meat but the spoon came about to get things that the hands just could not hold. Archeological evidence shows that the earliest spoons were made of shells (sea shells and snail shells) and even pieces of wood that were slightly curved.

The most far reaching design of a spoon came from the Romans. They developed long handles with round and oval ends to help hold the food better. Due to the vast Roman Empire and the influence they had on cultures, the new spoon designs took off. The first ones though made of shell and wood continued for many centuries. Over the time the rich were able to have gold and silver ones. But the development of tin and pewter in cutlery brought the most advanced spoons into the hands of the masses (literally!).

The Useful and Dangerous Knife

Next in history came the knife. Originally knives were developed for warfare and as an overall cutting instrument. Dining was not a major consideration in the design of knives. Over time knives began to be a regular part of a person’s dining attire. Whether male or female, you carried a small knife in a holster around your waist. Since you needed one with you anyway to protect yourself from any enemies who decided to do away with you during the fourth course, why not have it handy and use on your food and possibly your dining companion. It was during the Middle Ages that these small versatile knives were used to spear and cut the food. Since forks were not common during this period, the knife served the same purpose. Over time, forks began to replace the dining needs of the knife. Yet, strangely the knife was always present. In order to curtail bloody table talk, King Louis XIV of France in the seventeenth century declared it illegal to bring a sharp knife to the dining table. Knives were still needed to some degree. As a result of the need and the new law, the knives were filed down to a bluntness and rounded off. Dinner became a much more social and pleasant affair.

Forks have become one of the most basic of our dining instruments.  They date back as far as the Greeks, but originally were created with two tines as a spearing utensil.  Dining was not the intent of the first fork creation.  Cutting and serving was the main purpose in which two tines worked wonderfully.  By the seventh century it was common place at the tables.  Originally, like most things, it was the rich who had them first.  They were very ornate.  Yet Europe was very slow to adopt this tool.  Many comments were made that God created hands and that was good enough for them.  But some OCD person figured out that they could come in handy.  Eventually, small forks could be found to retrieve messy foods so that the hands could stay relatively clean.  As the years rolled by, the forks were used more and more.  It was in the seventh century (when knives were ordered to be changed) that forks with four tines were developed.  The inventors saw that when using the two tines, food could easily sleep through it.  The addition of two extra tines kept the food on the fork.

Designs change based on needs and eating utensils are not exempt from it.  How many times do we tire of changing from one utensil to another?  Well back in the late 1800’s it seems that several people were experiencing that very thing.  The result was what we know now as the spork.  It was a spoon with short tines in the end to spear small bites.  This was great for stews and soups.  In the early 1970’s, the spork that we are most familiar with was developed by KFC (Kentucky Fried Chicken) for their famous coleslaw.

Most of these developments were in the Middle East and Europe.  They spilled over to the New World, but the Far East was going down a much different path.  Over five thousand years ago, cooks began to break off small twigs to serve the food.  The functionality of it was noticed and the chopstick was born.  As fuel concerns spread throughout China, food was cut up with the knife so that cooking time was decreased.  This led to the uselessness of knives at the table.  The chopsticks served the diner very well.  The Chinese developed them in a more rectangular shape about ten inches long.  It wasn’t until the first century that it spilled over to the rest of Asia which created chopsticks with a more pointed end to help spear food.

Food is an important part of everyday life and the growth of cultures.  So it is not surprising to see the development of the utensils to eat the foods each culture consumed. As the cultures changed so did the tools they used to eat.  So, when you set down to eat your next meal thank the Greeks, the Romans, the French, and the Chinese for helping to bring to you the ability to enjoy the delights in front of you. 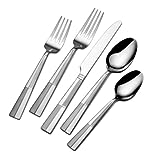