Since ancient time, the palm tree, in its different varieties has been a source of livelihood to those who live around and outside of the regions where it grows. One palm tree in particular, the oil palms of the Arecaceae, or palm family, has been the source for many well known palm products.

The African Oil Palm Elaeis Guineensis, a species vastly grown and breed in countries such as, Ghana, Nigeria, Indonesia, Malaysia, and other West and Southwest African Countries is the source of the Palm Oil, and the Palm Kernel Oil. The Oil Palm Elaeis Guineensis is a very fruitful tree that has a high yield of these two natural oil per tree. Oils derived from this palm tree species are used as cooking oil, ingredients for soap, skin oil, and as a dietary supplements.

A third oil, the Coconut Oil, is from a different palm called Coconut Palm (Cocos nucifera). Cocos Nucifera is a member of the palm family Arecaceae. The fruit of this tree is the coconut from which the oil is extracted.

Palm oil is a red cooking oil that is extracted from the pulp of the oil palm fruit of Elaeis Guineensis tree, and is a popular cooking oil in Nigeria, West Africa, and in East Asia. It is used in the preparation of many porridge dishes, soup dish, and can also be used in frying, baking, and as a salad oil.

I especially like to use palm oil for the stew of beans, to cook egusi and ogbono soup; these are special dishes in Nigeria. Palm oil is naturally reddish in color because of a high beta-carotene content. To tone down the reddish color of palm oil in dishes, I sometimes use it in combination with olive oil (equal portions), this also helps to enhance the taste of the palm oil.

Palm Oil, because of its high saturated fat level, can withstand extreme deep-frying heat and resists oxidation. It's been shown to have a similar effect on ones total cholesterol as olive oil. Palm oil is cholesterol free, and full of high potent anti-oxidants.

Due to it semi-solid form at room temperature, Palm Oil has been sometimes misconstrue as an artery clogging oil. But, its been found that Palm oil is actually packed with lots of health benefits. Among some of its benefits is the fact that Palm oil is very high in Tocotrienol, a form of Vitamin E. 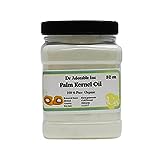 Palm kernel oil is an edible plant oil derived from the nuts of the palm oil kernels. Remember, that palm oil which is derived from pulp between the outer kernel fruit skin and the hard shell that houses the nuts. So you have the red skin, the dark husk mixed with reddish pulp (mesocarp), the hard shell, and the nut/kernel, which is encased in the shell.

Palm kernel oil is a common cooking ingredient. It is semi-solid at room temperature, and is more saturated than palm oil and comparable to coconut oil. The making of this oil of the palm fruit is a long process that begins with the harvesting of the palm kernel fruit. After it is harvested,

Palm Kernel has a longer shelf life than other vegetable oils, and remains stable at high cooking temperatures. This makes it well suited for cooking and in the production of kitchen stables, such as, margarine. 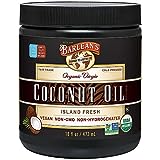 Coconut milk is derived from the coconut fruit through pressing of the fruit. The milk can be used as a beverage or as an ingredient in most rice recipes or soup.

From within the fruit of the coconut is the clear coconut water. This clear liquid is a drink that's not only tasty, but also refreshing. So if you ever get stranded on an island, crack a nut to get a taste of this drink.

Coconut Oil is commonly used in cooking and frying. This oil of the coconut palm is known for its many health benefits, some of which are listed:

It is also common for most people to combine Coconut Oil with other oils like the Saffron Oil and use it as an hair moisturizer, and even as a body massage oil.

Do you love to write? Do you have a passion for sharing with others what you know? You can do that by signing up right here on hubpages. And guess what? You'll make some money doing it too.