Take I-95 and Head for the Six New England States 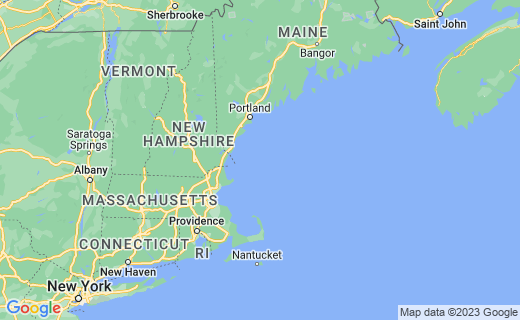 New England is so called because this six-state region was first colonized by the English with the arrival of the Mayflower to southern Massachusetts shores in 1620. Even after 393 years, a visitor to this region can still see the imprint of the English in the historic city buildings (which look just like those in London), the old stone walls surrounding some historic farmhouses, and in the typical breakfast foods still served in diners and small restaurants throughout the region. This hearty breakfast may have been eaten every day by hard-working farmers, but mostly it was eaten by townsfolk on Sundays, their day of rest, just as it is enjoyed today.

A typical English breakfast is the “Full English” or, sometimes, the “Full English Fry Up.” Nowhere is this still more true than in the small seashore towns of Cape Cods or mountain ski towns of New Hampshire and Vermont. The typical New England breakfast is a selection of fried meats, such as bacon, ham, sausages, or corned beef hash (one or all of them), eggs (fried over easy or sunny side up, scrambled hard or loose, poached – any way you like them), home fries (boiled potatoes cut up into chunks then fried on the grill), and some kind of fried bread, such as the typical jonnycake or pancakes, muffins, toasted wheat, white or rye slices or English muffins. And sometimes, though not as often seen any more, a side of typical Boston Baked beans is served. In seashore towns, a typical New England breakfast may feature fried fish cakes instead of – or alongside – the other meats.

The Jonnycake (or johnny cake)

Rhode Island prides itself on having invented the jonnycake but this, or a version of it, is served throughout the New England region. The agreed-upon spelling of this cake on Cape Cod seems to be “johnny cake,” and it is sometimes also called by its original name of “journey cake” (from which the modern “johnny cake” is derived). Derived from a Native American recipe shared with early New England settlers, this is a flat, hard pancake that used to be made using flint corn – a variety of hardy corn that grows well in the salty, foggy air of coastal areas like Rhode Island and Cape Cod. Nowadays they are made with cornmeal, salt, either water or milk, and, sometimes, a little sweetener, then fried. Unlike pancakes, johnny cakes are unleavened and therefore fry flat. They were called “journey cakes” by early settlers, colonists and pioneers because they could be packed into saddlebags and taken on long trips without fear of their spoiling.

Corned beef hash came about as a way to use leftovers from the traditional New England boiled dinner. The ingredients, therefore, are essentially corned beef, onions, potatoes, and, perhaps, cabbage. These are then “hashed” or thrown together, perhaps diced or chopped a little further, and pan-fried or grilled to warm it up before serving alongside the eggs, breakfast meats and breads.

Although they might seem weird to people who don’t live in coastal areas, to anyone who has ever eaten lox (thinly sliced smoked salmon), kippers or smelts for breakfast, fish cakes as a breakfast food will not seem too strange. In coastal areas, especially commercial fishing areas like Gloucester or Cape Cod (Massachusetts) and Maine, fish cakes are a staple of a traditional New England hearty breakfast. These are usually made from a flaky white-meat fish, such as cod or scrod, breaded and pan-fried to give them a delicate golden, crispy crust. They are truly scrumptious!

While baked beans are sometimes also a part of the traditional “Full English” breakfast, Boston baked beans have a secret ingredient that gives them a deeper sweetness: molasses. The other secret to great Boston baked beans is slow cooking. The early colonists would make these beans in heavy ceramic beanpots, place them in the banked fire of their hearths on Saturday night, and let them slowly cook overnight until the Sunday breakfast.

A typical New England breakfast is hearty, but it’s a great way to start a modern Sunday – or any day of rest!

What’s your favorite breakfast? Where in the world have you had the best-ever breakfast? Please share in the Comments below!