Street Foods to Eat when in the Philippines

Xeng is a researcher at the University of the Philippines where she is currently working on a dissertation for her Masters in Communication.

How Filipino Food Came To Be

First, let us talk about the Philippines. The small archipelago which boasts of more than 7,000 islands had been under occupation of 3 major countries for more than 400 years. Aside from that, residents of neighboring Asian countries began flocking to the Philippines hundreds of years ago because of its beauty and because of the vast natural resources the country has to offer. These varied cultures have certainly impacted the tastes of the Filipino people. We have certainly developed a love for both Western and Asian food, as evident in most of our food staples. However, our street food is something that is, I can say, unique in all the world.

I'd say that yes, it has been very largely influenced by other countries, but it has retained its "Filipino-ness" throughout the years.

In this hub, I will share with you some of the tastiest and yummiest Filipino street food. Some will even have recipes included so read on.

Sure there are a ton of street foods available along the tiny and congested streets of the Philippines. There are some made with various kinds of eggs. Others are made with chicken and pork entrails. Others still utilize fruits for snacking. They are all equally yummy depending on your tastes but here are my absolute favorites!

Isaw (pronounced ee-sau) is a char-grilled item which can be found in the streets late in the afternoon, just as it's getting dark. I learned that Filipinos discovered this awesome treat during the spanish colonial period when all they could eat as "indios" (that's what Pinoys were called then and they were sort of slaves) were the pork and chicken guts because that was all they could afford. Such a sad experience led to a very tasty discovery!

There are various kinds of isaw which I would very willingly itemize for your learning experience.

The first and most common one is the isaw manok. This literally translates to chicken's intestines. I'm not really sure whether it's the big of small intestine of the chicken but this sure does taste good. It's usually marinated in a special sauce then grilled til black. Just kidding. Well, some isaw manok aren't cleaned so well that there's usually a bitter aftertaste, much like eating it burnt. I might be the only one who notices because this is clearly a Filipino favorite, cleaned well or otherwise.

Now we go to another kind of isaw. This is my favorite. It's very soft and tasty, perfect for that light afternoon snack to satisfy one's grilled junk craving. Dip it in some heavenly vinegar mixture and you're sure to die of food coma. Well at least you'll die happy. This literally translates to pig's intestines. I believe this is the big intestine because I know for certain the pig's small intestine is called a different kind of isaw. Yes, you see, being in a developing country encourages being creative with food, even resorting to using the entrails, Doesn't matter, it's yummy.

This is one of my other ihaw (grilled) favorites apart from the two isaw kinds. I'm not really sure whether it's from pork or chicken, but either I like it either way. It's very chewy and flavorful. Some stores sell this fried and others sell it grilled. For me it's still yummy whatever way they cook it.

This is the most expensive ihaw kind because it's actual barbecued pork meat. While the others retail for around 5-7 pesos each depending on where you are, the laman sells for a minimum of 10 pesos each and can go as high as 20 pesos per stick. 1 star from 1 rating of Pinoy streetfood

I read somewhere that chicken blood turns a bit gelatinous when left a while. They then cook it a bit to retain shape then cut into little squares resembling the betamax. If you're a youngster reading this, just so you know, betamax is something like the VHS, a predecessor of your CD and DVD players, Ipods, and home theater systems. It might sound all gross and yucky but it really tastes quite nice, especially when dipped in some vinegar because each cube is kinda airy and full of holes so it sort of really absorbs the sauce. I really miss eating this because the isaw place near my school don't serve this. What a bummer.

Adidas are said to be named after the three stripes of the brand resembled by the three chicken fingers on each foot. Well I actually thought it was just called Adidas because it is a famous shoe brand and it's a foot they're selling so there's that. This is often grilled as a whole and people really eat only the skin part of the foot. They also serve this in Chinese restaurants in the country, complete with sauces. See, people here don't like wasting any part of their hard earned food.

Well, to be honest, I have never tried this dish myself so I can't really comment on it. It's grilled chicken head. I'm not sure if it has the actual skull intact or something but I guess it's good because it's always available. I guess it has its own set of loyal followers. Give it a try to let me know what you think.

It's the cartilaginous part of the pig's head and it's actually yummy. It just takes some getting used to. It's fun to chew because it's not soft nor crispy. I don't know how to describe it but I like this too. Plus it's the cheapest, I think, next to the betamax. Now we go to the balls, but it's not the "BALLS" you have in mind. These balls are actually quite edible. And no, not in that way too. These are balls sold on the streets, in a push cart which resembles that of a sorbetero or an ice cream man. The balls are as follows:

These bonuses aren't really part of the ball family because they're not necessarily round nor made of flour. But they're often sold alongside fish balls and are also some of the most common food cart staples.

kwek-kwek and tokneneng are both eggs folded in orange batter and deep fried to perfection. These are often served with either sweet dipping sauce or vinegar. It's usually the same dipping sauce used for the balls. In case you're wondering, kwek-kwek is smaller than the tokneneng and is made with quail eggs. Tokneneng uses chicken/duck eggs. These usually retail for Php 2.50 and Php 10.00 respectively.

I'm not really a fan of fried siomai because I like my siomai steamed but I know lot of people who enjoy this treat. It's actually really different from what I'm used to so I guess that's why I don't appreciate it much but that isn't to say that it says yucky. It actually tastes fine. There's an aristocart -- a food stall or cart which plays on the word aristocrat, coined by the people from my university -- in my school that people would go all the way to visit for their fried siomai. It's located at the College of Architecture. I've tried it there and it really was something. Fried siomai is usually sold for Php 25.00 for 4 or 5 pieces.

Where to find these street food

Lucky for me, I went to one of the biggest and most liberal universities in the Philippines and it has everything I could ever wish for. There's an isaw place near the College of Law and fishball kiosks all over the university. If you ever find yourself in Manila and in need of some cheap grub to fill your hungry stomach, head on over to UP Diliman and you're sure to find what I'm talking about.

Note though that I prefer Ate Angie's isaw instead of Mang Larry's (the more popular one, I'm hipster that way). I guess it's a matter of preference and taste.

PS: I really like Ate Angie's isaw and the vinegar dipping sauce! I could down it after finishing all my isaw!
PPS: Ate Angie's is beside Mang Larry's so if you're not that pleased with their isaw, you can just switch to the other side. 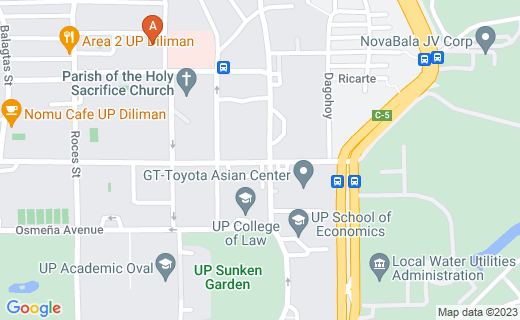