Top Organic foods you should buy

There's lots of reasons to buy organic. First, it's better for the environment. No pesticides means healthier soil, water, and wildlife. Only reason for not buying organic foods is the ridiculously high price. Pesticides and chemicals have been linked to the growing cancer rates and disease. This is particularly important for growing children. When we feed our children, we feed our future. Teaching our children the importance of protecting their health and making good choices when we are not with them is an important concern for every parent. USDA's own tests show that most non-organic produce contain residual pesticides even after washing. The long term effects of consuming these pesticides has not been sufficiently studied, but they can't be good for you.

Here are top foods you should buy organic from organic milk to organic beef.

Antibiotics and hormones are forced into America's conventional dairy cow to increase profits without regard on our children's health or that of the cow's. When moms understand that the food they eat and the medicines they take can go into their breast milk, they will make the connection that the medicines and foods given to dairy cows can affect their family's health. They prefer avoiding the routine use of antibiotics, artificial hormones, pesticides and genetically modified feed. Organic cows must, by regulation, be allowed to graze on pasture during the growing season. Organic milk represents a whole organic ecosystem. If you drink milk, choose organic every time.

Potatoes are consistently on the list of most pesticide-contaminated vegetables. In recent USDA testing, the Environmental Working Group found that 81% of potatoes still contained pesticides after being washed and peeled, and the average potato had the highest total amount of pesticides of all of the 43 fruits and vegetable tested.

If you look at the ingredients on a jar of conventional peanut butter, it's an over-sweetened, unhealthy, high-fat food. In addition to peanuts, the next ingredient may well be corn syrup, then sugar. You might also find partially hydrogenated and/or fully hydrogenated fats, mono- and diglycerides, the pesticides ferric orthophosphate and copper sulfate and a long list of other ingredients.

Babies are particularly sensitive to pesticides. Make your own or go organic. Babies eat more than adults, pound for pound, and they are more vulnerable to environmental toxins. The EPA has concluded that carcinogens average 10 times the potency for babies than for adults, with some chemicals up to 65 times more powerful.

Consistently named as one of the most pesticide-contaminated fruits and vegetables. Choosing organic apples can make a big difference both in lowering your family's pesticide exposure and in using our consumer power to change agriculture.

Cattle are designed to graze. When cows are fed corn, their stomachs can become 10 to 100 times more acidic, welcoming bacteria such as E coli; An estimated 25% of the nation's baking soda is used as antacid for livestock. And the amount of antibiotics used to promote growth in livestock dwarfs the total amount used to treat diseases in people. It is easy to find organic milk; it can be tough to find organic beef. Even though there are more than three times as many beef cattle in the United States as dairy cows, there are fewer organic beef cattle than dairy. 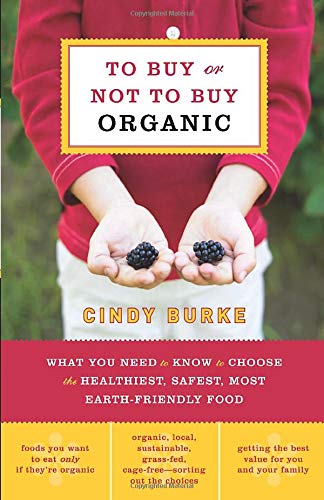 To Buy or Not to Buy Organic: What You Need to Know to Choose the Healthiest, Safest, Most Earth-Friendly Food
Buy Now