In the Kitchen, Use The Meat Mallet or Pounder for More Than Tenderizing Steaks

A lot of meat mallets for a lot of purposes

Before I go any further, I want to be sure to mention a couple of things. The first is that the meat pounder is mainly known as a meat tenderizer, or sometimes it's called a meat mallet.

When you search "meat tenderizer" online, though, you'll see results for both the pounding type tenderizer, and mixes or marinades that will break down the meat through food and other chemical reactions.

So, instead of calling it a meat tenderizer, I'll call it a meat pounder or mallet.

The other thing is that it's important to keep the meat pounder very, very clean, just as you do any cutting board that you cut meat on. After using soap and water, and scrubbing any toothed surfaces, wet the pounder or mallet down with vinegar and set it aside to air dry. Vinegar is an excellent and very handy kitchen disinfectant, and would work fine for keeping your cutting board sanitary, too.

OK, on to the good stuff.

I'm not a big fan of kitchen utensils that have only one purpose. I think that's one reason why I like to watch Alton Brown's TV cooking show, even if he is a little goofy; we feel the same way about cluttering up the kitchen with specialized gadgets.

The metal meat pounder or mallet (don't use one made of wood) is a good example of a multi-purpose utensil. There are several different types of meat pounders, and they all do a great job on the meat. (While some mallets have a side with large teeth, and small teeth on the other side, I'm talking about pounders or mallets that have a toothed side and a smooth side.)

For pounding, I tend to like the heavy meat pounder that is gripped in the fist like a big rubber stamp and has interchangeable heads. I like it mostly because it's easy on my wrist and has enough weight to do the job well.

An offset style of metal meat pounder is also offered for sale, but I have never used one or seen one used. (Pictures of all three main styles are shown below in the Amazon section.)

Abalone can be tenderized with a meat mallet

How to use a meat pounder or mallet

While the smooth side of a meat mallet is used for a lot of different meats, I think that it's used most often at home to flatten the thickest part of a chicken breast so it's the same thickness as the outer edges. With the meat having a uniform thickness after it's flattened, it cooks evenly and avoids dryness in what would have been the thinner part of the meat.

The toothed surface of meat mallets or pounders are especially useful on meat that's good quality, but dense and not fatty. It works great on grass-fed beef and on wild game. A friend's husband goes deer hunting every year to fill the larder, and she uses her mallet when she's preparing the deer meat. It's wonderful!

You also use the toothed surface to pound the cheaper, tougher cuts of meat, such as skirt steak. While they are tough, they are usually very flavorful, and worth the extra effort.

Tenderizing tough or very dense meat with the toothed surface of a mallet is pretty straightforward, as long as you work from the center of the meat outward. It works great if you want to break up tough meat fibers. (Be careful not to pound hard enough that you pierce the meat clear through.)

Using the smooth surface requires a little more technique. I checked several videos on how to pound chicken meat flat, and I like this one the best, because she doesn't pound the chicken breast hard to flatten it, but opts for lighter, more frequent strokes. Her downward strokes are not straight up and down, but move slightly toward the outer side when she's pounding. When pounding the meat, you're spreading the meat tissue out so it's a flat, uniform surface. So you don't have to wear yourself out by pounding hard. This technique works for all tender meats and seafood that you want to flatten, either because you want a more uniform thickness, or you'd like to roll the flattened meat around other ingredients.

(I've added a link to the Food Network below, where 31 recipes use a meat pounder. These will give you some great meal ideas.)

When I'm using a meat pounder to flatten meat, I like to use a double thickness of saran wrap on the top. A hint for adding herbs - just before you've pounded the meat for the last few times, sprinkle minced garlic, spices or dried herbs on the surface of the meat.

How to flatten chicket breast with a meat mallet

Tenderizing steak with a meat mallet

Crush garlic without a crusher and very safely

In the video below, you will learn how to use the meat pounder to crush garlic in a safe and easy way. And you don't have to clean those hundred little holes in the garlic crusher! If you give your garlic a light pop with the pounder to flatten it a little bit before you peel the cloves, they will be very easy to peel.

The meat pounder works beautifully when you want to crack large marrow bones in the middle. A few sharp raps and the marrow is available for soup or other recipes. If you're using the stamp style pounder, you can rap the bone with the edge of the pounder.

If you crack nuts with your meat pounder, wrap them in a towel first. You can cover a single nut before you crack it. Or you can lay a whole single-nut layer down and cover the pile with saran wrap and a towel. Then crack them with several light taps. Then you won't leave marks on the meat pounder and you won't have nutshells flying all over the kitchen. When I use my mallet, I use the toothed side to crack the nuts, because I don't want to risk leaving dents in the flat surface. This method is especially handy when cracking walnuts or pecans for cooking.

Once the nuts are cracked, using the pounder to flatten the nut meat also works great. I flatten filberts (hazel nuts) this way. They break apart well and work perfectly for a holiday variation on a custard pie that I make. I've successfully flattened filbert and walnut nutmeats using this method. I'm sure that pecans would work well, too.

Do you have only big ice cubes and need smaller ones? Or do you want crushed ice? Put the ice cubes in a plastic bag, then wrap it with a linen towel. Then whack the whole thing several times with the meat pounder.

If you need broken pieces of hard candy for sprinkling on cupcakes, adding to cookies, or mixing into ice cream, your meat pounder is the perfect tool. Put the candy in a plastic bag and whack it until you're happy. (Well, if you're in a bad mood, you may not want to whack it that long.)

Break up chocolate before melting it

If you'd had a messy, melting pile of chipped and sliced chocolate, you'll appreciate this one. It's very quick and easy. Put those big sections of chocolate into a plastic bag, wrap a towel around the bag and whack it until the chunks are as small as you want them.

Put the food to be crushed into a plastic bag. Whack it with the flat side of the meat pounder until it has broken down to the proper consistency.

If you've never cooked plantains, in the frying process, you cook them twice. Between the two cooking sessions, you flatten the slices to about half their original thickness. The flat side of your meat pounder works great for this.

In crab bisque, the intense flavor comes from the crushed shells. Wrap the crab shells in a towel and crush them in a pot with a mallet meat pounder. Here's a great crab bisque recipe from Epicurious.

When I was in the middle of cooking one day, my pepper mill disintegrated in a very un-charming way before I had all of the cracked pepper I needed. I placed the whole peppercorns in a plastic bag and crushed them with the meat pounder.

As you can see, your meat pounder is a great flattener or crusher for a lot of kitchen purposes. So use your imagination, and have fun!

In case you don't have a meat pounder and decide that you want one, I've added some meat pounders on Amazon and eBay below. 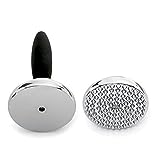 Norpro GRIP-EZ TENDERIZER/POUNDER, 5.75in/14.5cm long, 3.25in/8cm in diameter, As Shown
I used to prefer the meat mallet that you swing like a hammer. However, I tried this style mallet at a friend's house and immediately changed. I love this mallet! People who reviewed this on Amazon agreed, with almost 5 stars.
Buy Now

Comments about In the Kitchen, Use The Meat Mallet or Pounder for More Than Tenderizing Steaks