What is a VitaMix Blender?

A VitaMix is a high powered blender.  It is touted as being four times faster than typical blenders.  I’m guessing most people buy a VitaMix blender for making juices, smoothies, sorbets, and ice creams.  But did you know you can make hot soups in your VitaMix blender?!

The VitaMix is the favored blender of restaurant chains such as ChiChi’s®, and is used in Starbucks® and Baskin Robbins® franchises.  It is used by gourmet chefs around the world.  The VitaMix can “freeze and dispense solid ice cream, grind grain, cook soup and make a creamy, smooth juice from whole fruits and vegetables.”

I became interested in the VitaMix because my naturopath wanted me to juice according to a particular recipe, once or twice a day.  The juice doesn’t taste bad, but the juicer takes up a lot of space, and is really messy to clean.  I went to Costco a couple times to watch the VitaMix demonstration.

The juices were good.  The demo guy was careful about using “juicer” fruits and vegetables in the mix, since the VitaMix is more of a “liquefier”, and does not separate out the pulp to discard like a juicer does.  This is seen as a benefit, since the pulp supplies fiber and nutrients.

The ice cream was good too.  The guy threw some pretty unconventional things into the it to add nutrients, like a little bit of yellow squash and some cabbage.  Despite the vegetables, it still tasted like ice cream or frozen yogurt.

The juice and ice cream were impressive, but it was the Tortilla Soup that blew me away. As it happens, the powerful motor of the VitaMix, which is four times faster than the average blender, can also run for five minutes or more without the slightest worry that the motor will burn up. The friction of the ultra fast blades, running for three to seven minutes, creates heat which enables you to make a large selection of steaming hot soups.

In the Tortilla Soup recipe, you use chicken or vegetable broth, and blend with the other ingredients for five or six minutes. For the demonstration, the guy used hot water and bouillon, so it would be quicker. His version was slightly different from the cookbook. He used “all the usual suspects” like tomatoes, carrots, celery, onion, bell pepper, and a bit of jalapeno pepper. He threw in a small chunk of cheddar, and a couple corn tortillas. Then he turned the blender down low and threw in a bit of chicken and a few tortilla chips. Finally, he turned the blender super low. Turns out, the VitaMix blender blades can also turn four times slower than the average blender. He threw in some black beans and corn, which were not pureed, but merely distributed throughout the soup. Was the soup good? Are you familiar with the phrase, “It’s so good, it’ll make you want to slap your grandma”?

I have included a video of VitaMixLady, who is demonstrating the VitaMix, including her version of the Tortilla Soup. I like that she tells the health benefits of all the ingredients. She has a website, which has her soup recipe, as well as a link to the VitaMix site with the portal to all of their recipes. There are 57 soup recipes!

There are 38 VitaMix soup recipes in the recipe book that comes with the VitaMix 5200. They rate five of them as being prepared “start to finish in the VitaMix container”. I’d say more recipes than five fits the bill. If I have to peel a couple things or do a little prep, I figure the soup is still made without additional “cooking”. Some of the recipes do however require cooking or pre-cooked items like cooked chicken, baked potatoes and the like. Others require chopping vegetables in the VitaMix, then dumping them in a skillet to sauté them, then return them to the blender with the remaining ingredients.

The video in this section is by VitaMixTV, and shows a Tomato Basil Soup. She roasts the tomatoes and herbs in the oven, then finishes off the soup in the blender.

Raw Foods "My One True Thing" Green Soup by Dara

This green vegetable soup by Dara Dubinet is a raw foods soup, and seems to just process the vegetables, not heat them. Temperatures below 118º are not supposed to destroy beneficial enzymes. I definitely want my soup to be warm.

She starts out with water, and adds kale, celery, dill, cilantro, parsley, spinach, lemons and avocado. The soup is garnished with chia seeds and nutritional yeast. 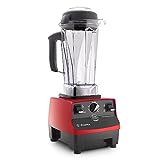